Smooth wrinkles and sharply crumpled regions are familiar motifs in biological or synthetic sheets, such as rapidly growing plant leaves and crushed foils. Nevertheless, the generic route whereby a featureless sheet develops a complex shape remains elusive. Think for instance of a birthday balloon: Two circular foils are glued together at their perimeter and a helium gas in injected, creating higher-than-atmospheric pressure inside the sealed balloon. This simple process leads to a fascinating pattern of wrinkles and crumples that emerge spontaneously near the perimeter of each foil.

Inspired by this example, our recent study addressed the mechanism through which such complex patterns emerge spontaneously. We discovered an unusual sequence of transitions that underlie this and possibly other types of morphological complexity. Instead of commercial balloons, we employed an ultra-thin circular sheet that was naturally stretched over a liquid drop (a surface tension effect). The drop imposes confinement on circles of latitude of the sheet. The degree of this confinement increases when the drop’s radius is decreasing, and an unusual sequence of transitions has been observed, as can be seen in the pictures below. At first (i.e. large drop’s radius), the elastic sheet remained nearly flat, but as the drop’s radius became sufficiently small, the sheet developed fine radial wrinkles near it perimeter (upper picture). Decreasing further the radius led to a second transition, from wrinkles to a crumpled shape (lower picture). 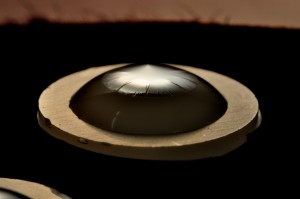 This sequence of transitions was understood through a recently-developed theoretical approach, a study which was published last fall in another PNAS paper, on which you can read in this blog. This theory proposed quantitative predictions of wrinkle patterns in ultrathin sheets by following the principle that such sheets must be free of compression. The sheet-on-drop experiment confirms these theoretical predictions, and suggests that the wrinkle-to-crumple transition reflect a dramatic change (called “symmetry breaking”) in the distribution of stresses in the sheet rather than just a further disruption of its symmetric shape.

The paper was featured on PNAS Cover.

An interview in NEPR (“All things considered”) with Benny and Hunter.