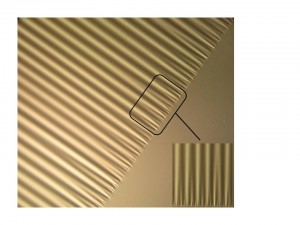 How does one make a rippled sheet terminate at a straight edge? If the sheet is sufficiently thin, such as a piece of paper or fabric, then the obvious solution of stretching it out flat will induce large stresses near the edge, possibly even tearing the sheet apart. A solution to this problem is suggested by the series of tiny folds of fabric generated near a curtain rod. A study of wrinkling patterns on an ultrathin floating raft of polystyrene led to the discovery of a new mechanism by which nature resolves such a conflict. Rather than the hierarchy of pleats seen in curtains, a smooth cascade of ever-smaller wrinkles emerges as the edge is approached. This kind of hierarchical geometry is theoretically explained by the action of the surface tension of water that tends to “iron out” any sharp features in the sheet.  Similar types of smooth cascades may appear in other problems in materials science where a patterned surface comes up against an edge that is incompatible with the pattern.

It was also featured in Physics, and in various other journals of popular science (e.g. 1, 2, and 3).