The calibration file is small, just 460 bytes. It has 12 numbers and a few lines of text. A gnat. During my final week at MBL, I realized that, while acquiring images of polarized fluorescence on the confocal, I had been loading the wrong calibration file. How could I have been so careless? In my defense, there are about a hundred calibration files stored in a single directory and the one I needed was named cryptically. But I am getting ahead of the story. 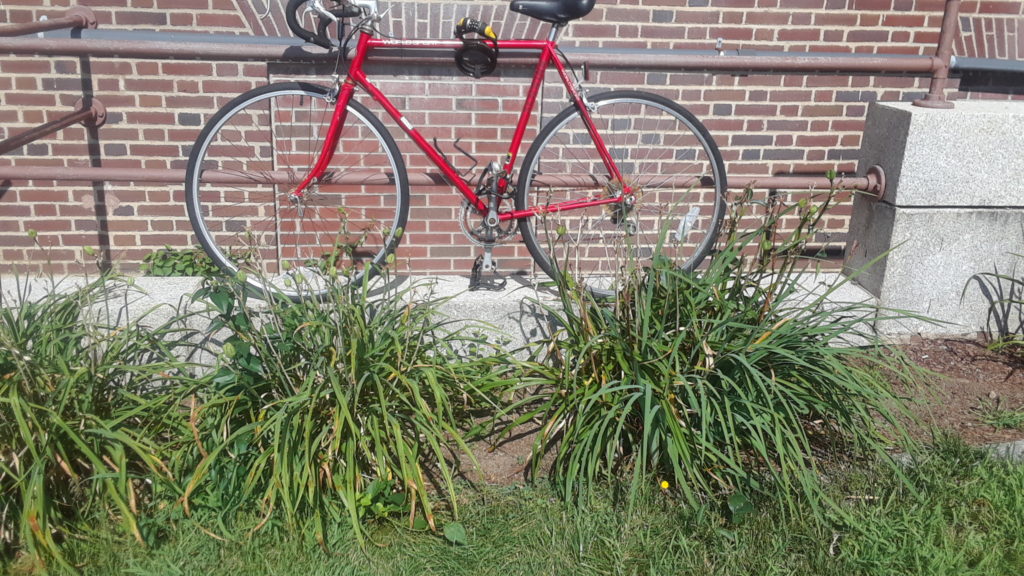 My fellowship ended August 9th. The daylilies where I parked my bike had all finished blooming (Fig. 1). They started when I started; I may measure the summer by the span of a daylily’s bloom. A month and half has elapsed since my last post, about half of that period I have been back home at Amherst. For a few weeks, I had the plausible excuse that the confocal microscope was so busy that I could get time only on Sunday, thus my customary blogging day was given over to doing actual science. And then I discovered the dis-calibration, a mistake that renders the images I had captured all but useless. There is no way to do the calibration retroactively. Embarrassment made me loath to blog about the details.

But in the spirit of this blog to say what went on, whether skilled or clumsy, inspired or insipid, elfin or orquentine [1], here goes. Polarized fluorescence is illustrated in Fig 2. This shows a couple of xylem cells stained with a dye that binds cellulose. The dye is called fast scarlet, which sounds like a character in a Bogart film. Xylem are the plant’s water conducting cells; xylem cell walls are thickened with ribs, because this is an efficient way to reinforce, saving mass compared to thickening the entire wall. The strength of ribs is provided in part by cellulose. The cellulose molecules run parallel to the ribs and, last year, I used xylem when I began work with polarized fluorescence exactly because we know that cellulose runs parallel to the rib. 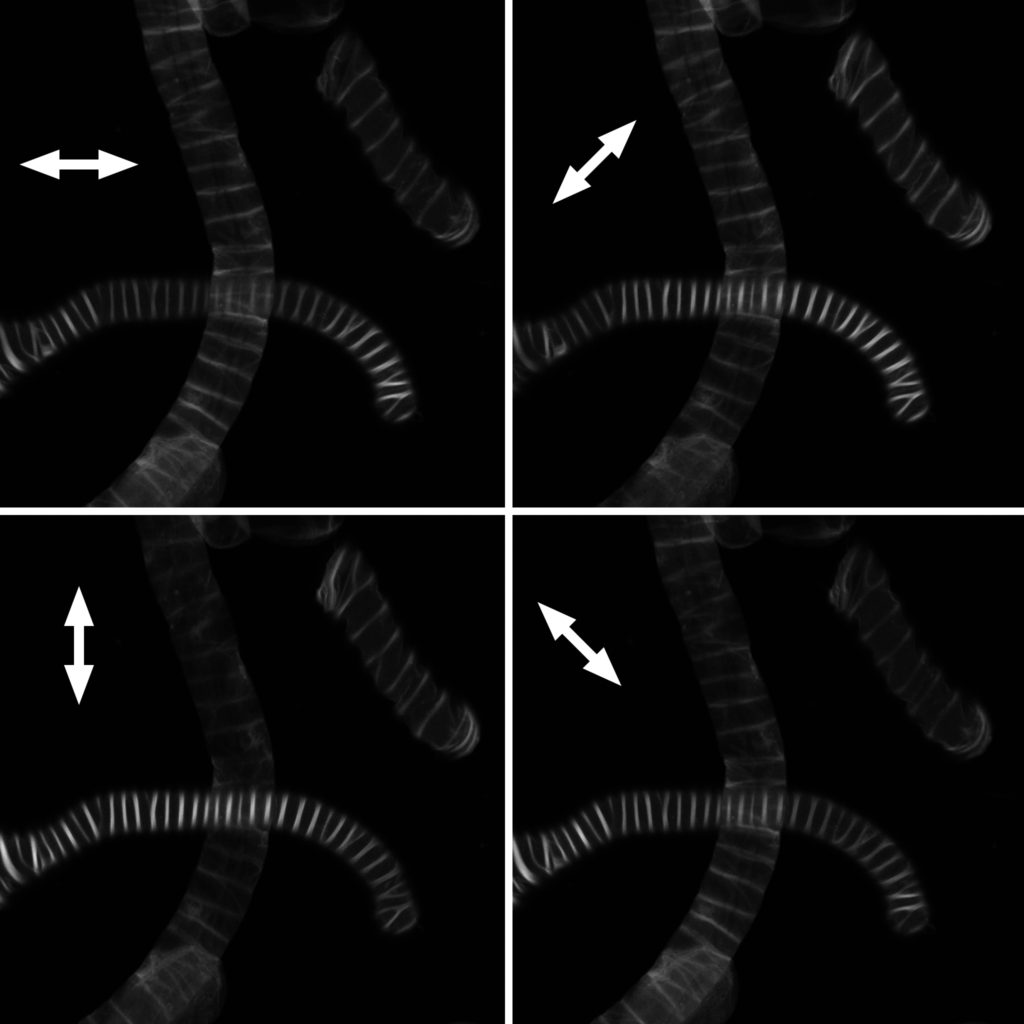 Figure 2. Xylem cells stained with fast scarlet and imaged on a confocal fluoresence microscope. The polarization state of the exciting light is indicated, approximately, by the double headed arrow.

But we don’t have to rely on our intuition. The lab at MBL where I was working, led by Rudolf Oldenbourg, exploited their knowledge of how polarized light interacts with matter to develop equations that convert the four intensity values (one from each polarization state) to a number that quantifies the degree to which the observed fluorescence depends on the polarization of the exciting light. This parameter is called ‘fluorescence anisotropy’, and it equals 1 for a region that fluoresces like crazy with light of one orientation and not at all with light at 90˚ and equals 0 where the fluorescence is oblivious to the polarization of the exciting light. Thus, fluorescence anisotropy measures how well a group of molecules are lined up, providing data on a molecular scale from a light microscope (one reason why I love polarized light). 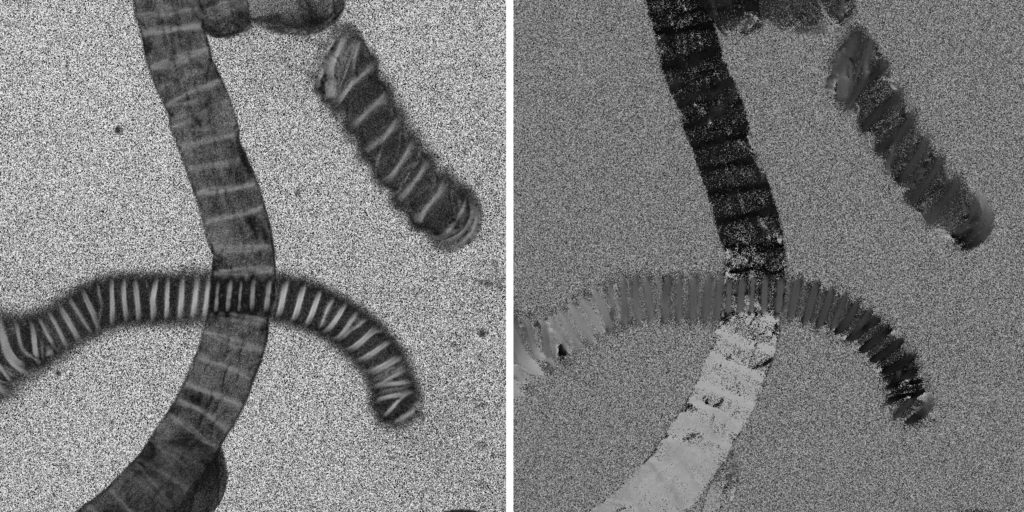 Figure 3. Images calculaeted from the raw input input images (Fig. 2) showing fluorescence anisotropy (left) and orientation (right). For orientation, an angle of 0˚ is black and an angle of 179˚ is white.

Oldenbourg’s team developed a plug-in that calculates the fluorescence anisotropy at each pixel in the image (Fig. 3, left). That the ribs are bright means that the fast scarlet molecules are well aligned, particularly compared to the region between the bands. The cell running up and down has dimmer bands and this is probably because the cell was younger at the time the preparation was made and hence the ribs are less well ordered.

The math continues. The equations also calculate the average orientation of the fluorescing molecules (again, strictly speaking, of the dipole moment). These calculated orientations are also shown for the xylem (Fig. 3 right). But here we have an issue. While our minds can fairly easily map brightness onto a scalar quantity like ‘fluorescence anisotropy’ (i.e., the brighter the pixel the higher the anisotropy), our minds are crap at mapping intensity onto a vector quantity like orientation. Looking at the cell running up and down, in the upper half of the image, the bars are dark and they run at a small angle to the horizontal; in the lower half, the bars are bright and they run with a large angle to the horizontal. This “orientation” image is fine for measuring angles (measure the gray level and convert to angle by multiplication) but not so easy to inspect by eye.

Figure 4. Images showing fluorescence anisotropy overlaid with red lines indicating the net orentiation of the fluorescing molecules. To see the lines more clearly you might need to click on the image to see a larger version.

One solution is provided by overlaying on the anisotropy image little red lines (Fig. 4; click on the image to see the lines more clearly). The lines represent the average orientation of the fluorescing molecules under the line. Looking at these lines, for the image on the left in Fig. 4, the red lines parallel the xylem ribs, everywhere. But for the image on the right, the red lines parallel the ribs for the cell with bright ribs running sideways but they point elsewhere for the cells running up and down. What is going on?

Red line conflict is how I demonstrated that I had been using the wrong calibration file. I had gotten suspicious that something was amiss with the orientations I was seeing for cells. But with cells, I don’t know which way the cellulose goes. I expect certain regularities but I don’t know, for sure. Fortunately, last summer, while I was working with xylem cells, I made a couple of ‘permanent’ slides for Rudolf. He had kept them and had even labeled them neatly. I imaged a cell first with the calibration file I had been using all summer and next with the correct calibration file. This comparison requires no adjustment to the slide or microscope and about 30 sec of computer business, so the imaging conditions for each calibration are essentially identical. The image on the left is from the correct file, the image on the right is from the file that I had been using all summer. Bummer!

Calibration is necessary because the four linear polarization states need to be really and truly separated by 45˚. The laser on the microscope is inherently polarized (happens with the lasing) but as the beam moves through the various optical elements on its way to the sample, its polarization direction gets modified. Thus, it is essential to determine empirically what the polarization state is and how best to use the liquid crystal polarizing optics to generate four states of linear polarization separated by 45˚. If the microscope gets a new component, or even perhaps as the laser ages, the calibration needs to be redone. Rudolf and collaborators have been developing and using polarized fluorescence on this confocal for more than five years and have accumulated myriad calibration files. These are named by wavelength and lens magnification, two key parameters, and sometimes other bits and pieces of information that pertain to the microscope configuration. I found the file for my lens and wavelength and imaged away. Alas, the magnification plays a minor role in the calibration and an up-to-date calibration had been done at the correct wavelength but with a 20 x lens (I had been using 40 x).

Well as they say, mistakes were made, and as they don’t always say, by me. I am not going to re-enact the crime any further. Suffice to say there were mitigating circumstances but also I was careless. I want to end this on a positive note. Qualitatively, the results with the polarized fluorescence on the confocal were impressive: the images delight the eye, and the confocal excludes most of the fluorescence from the opposite cell wall, making the images more meaningful than those taken with polarized light through a wide-field configuration. I am psyched to modify a confocal here at UMass to continue the project, with of course correct calibration.

← Going with the fluidics
A light week →