All six washing machines are filled. Maybe I am earlier than on past Sundays or maybe the place is busier? One of the machines was done, and feeling a little sheepish handling someone else’s clothing, I placed it on top and loaded mine. MBL folk won’t be subject to load rage, right?

Last week I continued to struggle with the confocal microscope, both running it and later off-line looking at the images. I had two sessions. On the first, I got a ton of what I think are going to be useful images. On the second, I failed to produce even one image; clearly, something was amiss, but who knows whether it was some unchecked check-box lost in the wilderness of program windows or an in instrument malfunction. This happened on a Saturday, of course, so there was no one around to ask. During the past week, thanks to Amit’s help, I also made progress on getting my laptop to open and process the confocal images, but not all the way there yet. With any luck this week. 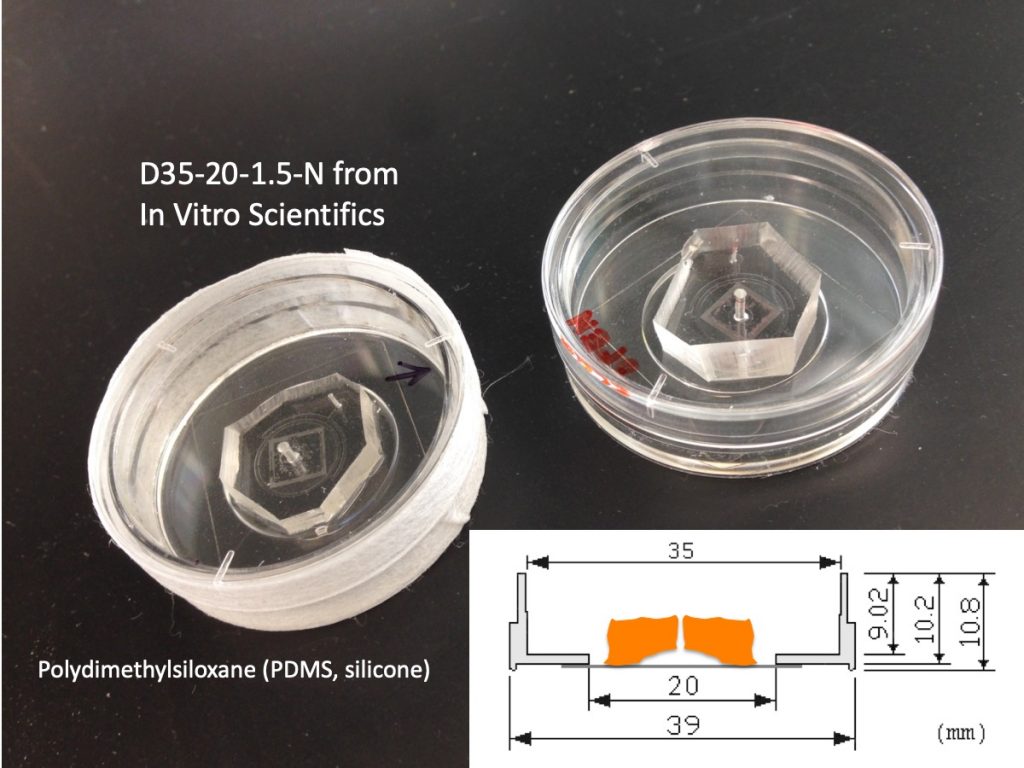 Figure 1. Microfluidic chambers made by John Oakey. In the schematic, the PDMS is shown (not to scale) as an orange mass. The cells are introduced into the cavern between PDMS and coverslip through the hole (shown in the schematic as a gap).

Last week, I succeeded in loading cells into microfluidic chambers for live cell imaging (Figure 1). These chambers are made by a guy at the University of Wyoming called John Oakey. His lab develops methods for making them and as part of his funding he sends them out for people to use. The issue here is being able to image cells for hours and even days. They need oxygen. The classic slide and coverslip arrangement (described earlier) will asphyxiate any aerobic cell (your typical plant or animal type) within an hour or so. The chambers are a way to deliver air but without letting everything dry out.

The chambers are built within a small plastic dish with a 15 mm diameter hole drilled through the bottom and sealed by a coverslip. Cells or anything sitting on the coverslip in the dish can be imaged nicely by using an inverted microscope, where the objective can be oiled to the coverslip. But air does not diffuse well through water so if you simply cover the cells in the dish with a few mL of solution, they soon become oxygen deprived. The fix is provided by a polymer called polydimethylsiloxane (or PDMS for short). PDMS has the consistency of stiff Jell-O but is dry and has large spaces, at the molecular level, thru which air diffuses readily. The chambers place a big slab of PDMS over the coverslip with a cavern hollowed out large enough to accommodate cells but not larger. This keeps the PDMS roof, and its air supply, snugged up to the cells. Of course, water will evaporate through PDMS too, so the slab of PDMS is surrounded by a moat into which a few mL of media sits, serving as a reservoir to keep the cells hydrated and nourished (the solution is not shown in Fig. 1).

Cells are loaded into the cavern through a small hole, drilled through the PDMS slab right at the center of the roof. Over at one edge of the cavern, there is a second tinier hole to serve as a vent.

I found out about Oakey’s chambers from my friend and colleague Magdalena Bezanilla who uses the chambers to culture moss filaments. Oakey sent me chambers two or maybe even three years ago now and a rotation student succeeded in coaxing BY2 cells into them and found that the cells grew well. For my project here, I need to use these chambers to image living cells. That student had left the lab long ago and I never did this thing myself. I got some extremely useful advice from CJ Bascom, a former a student with Bezanilla, who developed protocols for using the chambers to study moss. But withal I was nervous.

I loaded cells using a ‘yellow tip’ on the pipetter and then washed some fresh medium into the cavern to help spread the cells through the cavern, get them away from the central hole. Flushing requires a syringe connected to a few inches of tubing thin enough to connect with that small central hole. The first chamber I tried was kind of a mess. But for the next two, I did the loading operations while I watched through a stereo dissecting microscope, giving my old eyes a boost. To my amazement, there were cells throughout the cavern.

To my even greater amazement, the next day, the cells looked perfectly alive and well, the day after, groups of cells I had photographed one day 1 had divided and enlarged making the cell clusters so large as to be nearly unrecognizable (Fig. 2).

Well. Let’s see if I can do this again this week! If so then I will wash in some fluorescent dye and see what I can see on the confocal. Here’s hopin’…

Figure 2. BY2 cells cultured for (left) one day, (center) two days, and (right) four days in a chamber as shown in Fig. 1. This really is the same group of cells on all three days.