Strength in numbers, or so I hope

Happy St Patrick’s day. Last month, the science that partly inaugurated Lab Fabreached a sort of watershed. Hmm, that is a curiously apt word. As I understand it, a watershed is a geological division, like a ridge, between water systems. A hiker crossing a watershed, sees a changed terrain, climate, and biota, and their trek moves into a new phase. Last month, an undergraduate student, Melissa Elmali, working in my lab, did the last experiment on the project I started way back in 2014  (first entry: velocity atrocity), thus moving the project from the rocky lands of experient to the sandy climes of analysis. 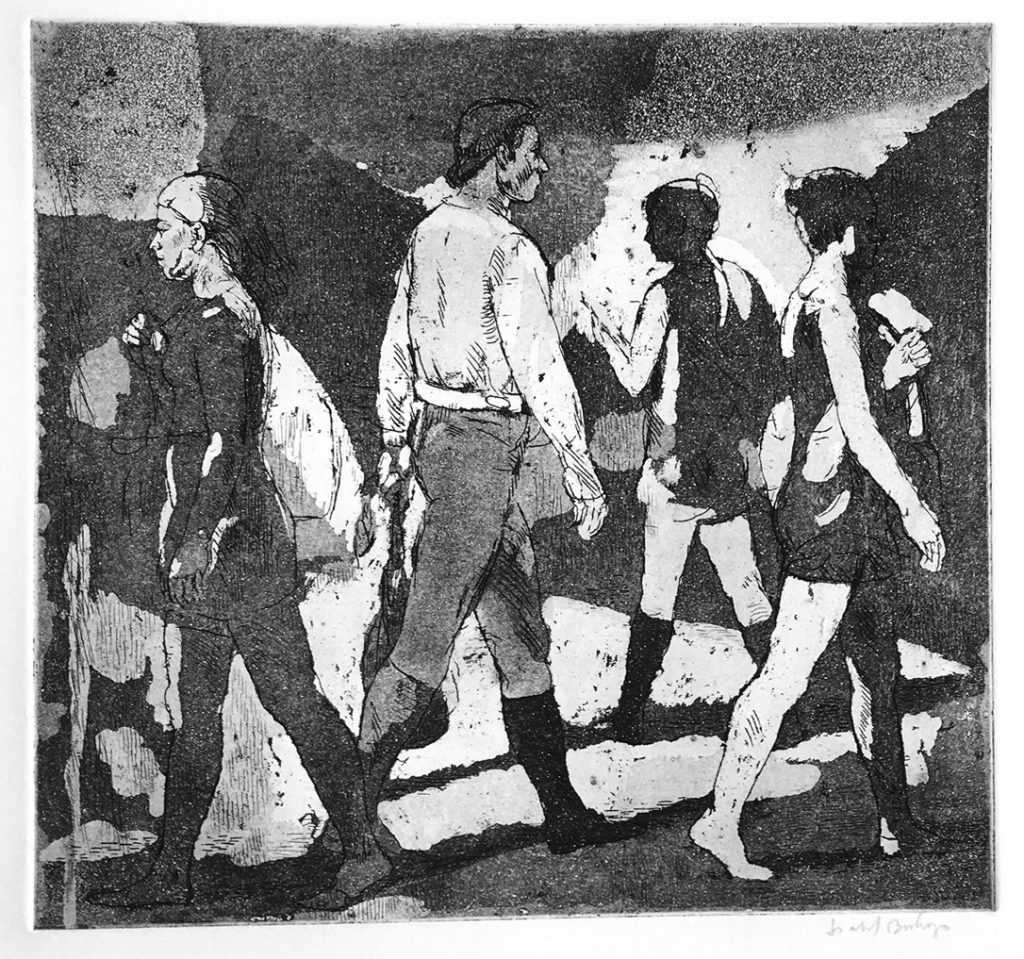 With the experiments done, what happens now is data analysis, and analyze data is what I did this past week. Being spring break, the week was open and I pushed many numbers through the spreadsheets. In any project, experiments and analysis are separate but for this one the separation turns out to be extreme. In hindsight, I’d say too extreme because I don’t even know what the experiments mean. I am hoping the data analysis will tell me (and will not demand more experiments). And that feels odd. Rather than detail the cut and paste of last week’s Excel-o-rama, I want to recount the history of this project to explore how this odd situation arose.

Looking back, I can see how experiment and meaning bifurcated. While I was on sabbatical at the University of Nottingham UK (where this project, as well as Lab Fab, began), I kept up, experimenting and analyzing more or less hand in hand. In fact, the analysis side flourished, thanks to the help of Simon Preston, a mathematician interested in numerical analysis and real data. The analysis Simon came up with led us to reveal the root’s growth zone dynamics to have a specific and surprising oscillation. Then, I came up with a plausible explanation of just what exactly is oscillating, based on some ad hoc poking around with the data, (read about it here: I got rhythm and Rhythms and blues).

But by sabbatical’s end, things had begun to fall behind. I had managed to image a set of 12 roots. Simon and I reckoned that 12 roots would be enough. Of course being into statistics, Simon would have preferred a sample size of infinity and since these experiments are tedious, I would have preferred a size of one; 12 was our compromise. Imaged 12 but analyzed only five. It was not until months later that I learned that all 12 roots oscillated (phew!).

What is oscillating you ask? Well yes, that is precisely the question. Trying to answer is how the project continued. First, we had to find out whether, in Amherst, roots oscillate. Maybe it is a UK thing? Happily, Amherst roots oscillate. But the patterns we get here are noisier than what I got in Nottingham. The technician in my lab, Ellen Zelinsky (now a PhD student at Penn State), spent ages trying to discover and root out [groan] the source of noise. The noise won; it remains. Oscillations in Amherst are faster and less regular than those in Nottingham; we are unable to say whether this represents a biological difference (Amherst plants are nervous) or a technical one (the Amherst microscope vibrates).

After 18 months or so of futile noise abatement, we gave up and decided to live with the noise and carry on with an experiment designed to find out what is oscillating. Or at least what causes the oscillation. We (former graduate student Xiaoli first, then Ellen, and lastly Melissa) did an experiment: we looked at the oscillation in roots whose shoot had been cut off.

Cutting off the shoot, a drastic step. We did this not because we like torturing plants but because we suspected the shoot might be influencing the oscillation. Plants grow throughout their lives and this growth happens at the tips of branches and root branches; dozens, hundreds, or thousands of tips depending on the size of the plant. These tips are independent in that each one can grow faster or slower as its own microclimate dictates. But they are all on the same plant so they cannot get ‘carried away’ and instead must be coordinated. For example, when there is lots of light and the shoot system can grow like the dickens to build leaves to soak up all that sun, the root system needs to keep up. The shoot sends messages to the root, letting it know how it is getting on. And vice versa. It was not crazy then to think that something sent from the shoot might influence growth dynamics. Also motivating this experiment was an observation we made some years ago (for a different purpose) that roots grow for several days after the shoot has been cut off. They are tough.

Well, cutting off the shoot removed the oscillation. When I analyzed the first cut-shoot experiment and saw the altered pattern, I thought maybe a fluke. But after seeing the same thing in five individuals, I was convinced. This was as cool an ‘aha’ moment as finding the oscillation itself.

This large and obvious change in the oscillation also motivated a couple of further experiments. For this cut-shoot experiment I just mentioned, we cut the shoot and started imaging two hours later. We wanted to allow any transient perturbations to die out. So next, we waited 24 h after cutting off the shoot before imaging the root. With roots a day past their shoot severance, the oscillation was still gone, tho the pattern looked different from the way it did at 2 h. We collected 12 of these too. The final experiment was to image immediately after cutting. Well, in practice that was about 2 minutes later. These roots slow down in their growth rate by 40% over the first hour after cutting and then stabilize. We needed 12 of these too and imaging the last of them was what Melissa accomplished last month.

Usually when the catchment of experiments is at last traversed, and the watershed reached, the new catchment is writing. But not so here. Coming back to that question, what is the oscillation? The text above has been vague perhaps to the point of infuriating you. Alright, you asked for it: The thing that is oscillating is principal component number one (Fig. 2). Satisfied? Of course not! A principal component is a statistical tool, a rigorous mathematical way to probe the data, which in this case has revealed a time-dependent fluctuation (oscillation) with a period of around 100 min (in Nottingham; maybe half that in Amherst). Simon had come up with a script that would take the 37 velocity profiles for a root (one every 5 min for 3 h) and run a principal component analysis thereon. From this, we could see how that key first component behaved. It oscillates. 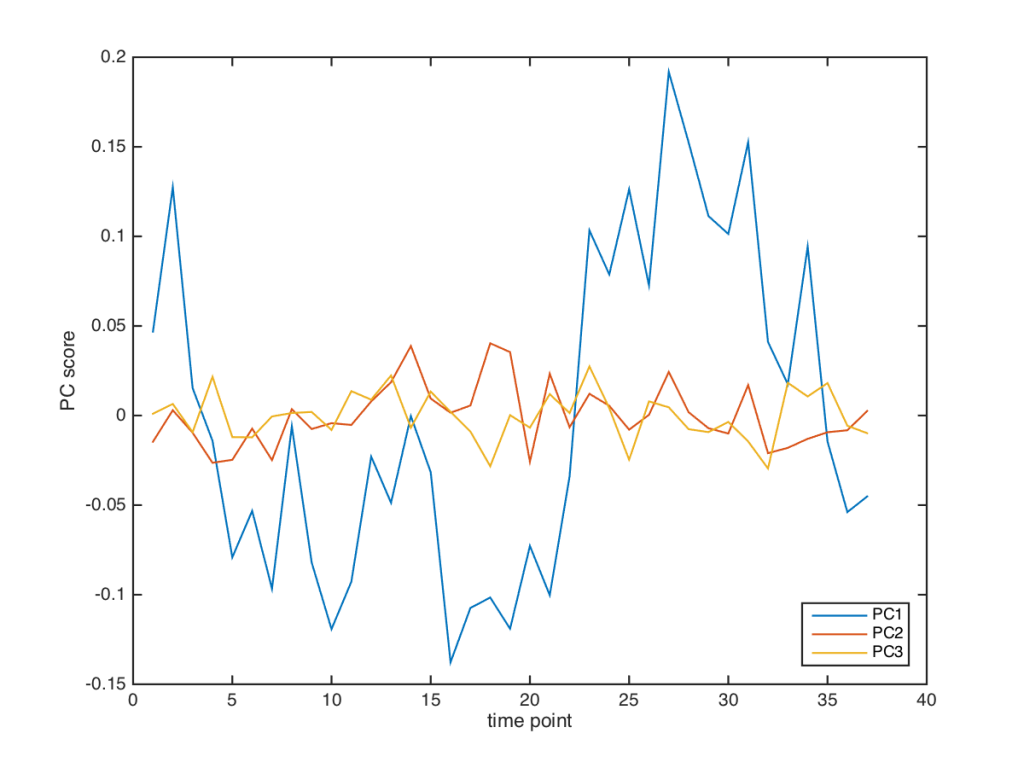 Looking at that first component is a great start to the analysis, but what pray tell does that component mean? What process or thing in the plant does it encapsulate? If I knew the answer to that question, then I could tell you what is oscillating. And not knowing is why I cannot start writing a paper. Instead I need to analyze the data further. This puts me in an odd position, I’d like to know what is oscillating even more than you do. Even tho I am not writing a paper, I am thinking about one, but it is odd to be still so in the dark about what that paper will say. Finding the oscillation is tricky. As I mentioned above I had done some ad hoc biz but now things need to be rigorous. I need Simon’s help, and indeed I have just asked him.

Not knowing what is oscillating is not new. I have not-known it all along. But having seen the dramatic consequence of cutting the shoot based on the principal components, I decided to collect the sets of experiments (i.e., image a set of 12 roots for the various conditions) and then when finished see what it all means, more deeply. This is perhaps a ridiculous way of proceeding, maybe it will mean nothing at all, or maybe (more likely) I will realize that I did the experiments wrong and have to do more before I can at last start writing (the paper). And so the analysis begins. I have already learned useful things about the behavior of the roots in the collection. But whether we can find out the meaning of life (well, of the oscillation) only time will tell.