A wee dram of data

What do you call a woman who drinks too much? … … A dram queen. OK ok, sorry, couldn’t resist, on with the tales of lab dram.

This week, I slipped the traces of the computer and pulled the lab work sleigh, twice. The first heave-ho lasted for about 45 min and was me getting started on an experiment that Melissa Elmali, an undergraduate in the lab, would take over, her schedule precluding her doing the whole thing. This experiment is a continuation of what I was doing way back in 2014 -15 at Nottingham when I started these logs. You may read here. Repeating this protocol sent me wafting down nostalgia street and I needed to restrain myself from sending Melissa off and doing the whole four hours myself.

The second bit of lab work lasted all day Saturday, starting when I pulled up outside the door of my postdoc, Eri Kamon, at 6 am. We drove down to Brookhaven National Lab, got there about 10 AM.  After a little trouble at the synchrotron door because my key card had died, we met up with Lin Yang. I have blogged about BNL trips here; but this time, we have a new objective.

Cellulose has been well studied by X-rays. But these studies have used almost always cellulose from wood. Sure,  wood is plentiful and commercially relevant (to say the least). But cellulose in wood is made by distinct although related enzymes to the ones that make cellulose is growing cells. To what extent does the cellulose in wood differ from that of a growing cell wall? I don’t know. I don’t think anyone does, hence this trip to BNL.

Eri had brought dozens of tubes, left over from her cellulose assays. The cellulose started out in the cell wall of a tobacco BY-2 cell, which Eri has been using for her experiments. Fortunately, she saved the residues. Each tube has about 1 mg of purified cellulose, dried into a mat. Taking a narrow spoon-like object, we scraped out the cellulose mat, yellowish and about the size and shape of a contact lens, and transferred it to the sample holder. A typical sample holder used on the beam line comprises a horizontal steel plate (which snaps into place on the beam-line) attached to a vertical aluminum plate, drilled with a six-pack of 3 mm holes. We put the cellulose mat over a hole and then taped down on top a thin plate of brass, about the size of a postage stamp. This flattened the cellulose mat and held it in place. The brass piece had a 2 mm hole that we aligned with the hole in the underlying aluminum plate. I am kicking myself for not snapping a picture of the thing to illustrate. Your imagination will have to suffice. The point is that by sandwiching the mat between metal plates with aligned holes, the beam goes through nothing but air and the mat (no supporting substrate needed). 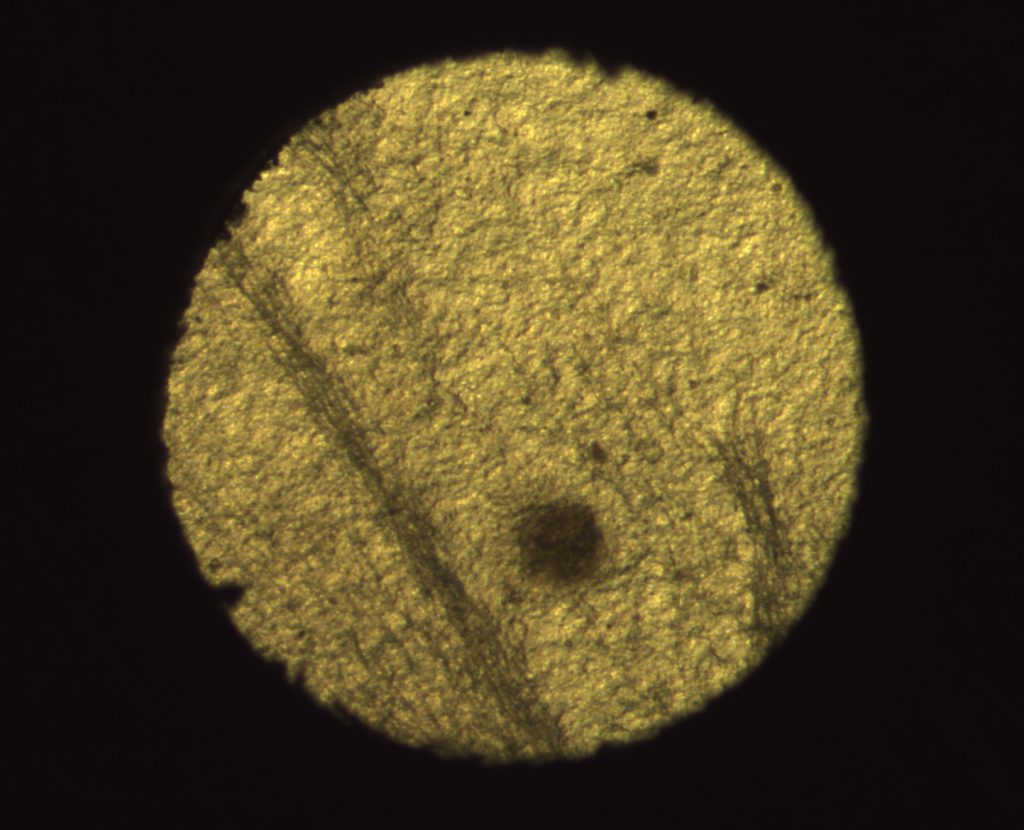 Figure 1. A cellulose mat after scanning. The diameter of the hole is about 2 mm.

Still, we did take a picture of the mat as viewed through the hole in the brass plate (Fig. 1). The small dark square is where the beam went through the sample. Yes, X-rays tend to cook things. Among the reasons why they are dangerous! But fortunately the cooking in this case is mainly a kind of dusting on the surface and the diffraction appeared oblivious. 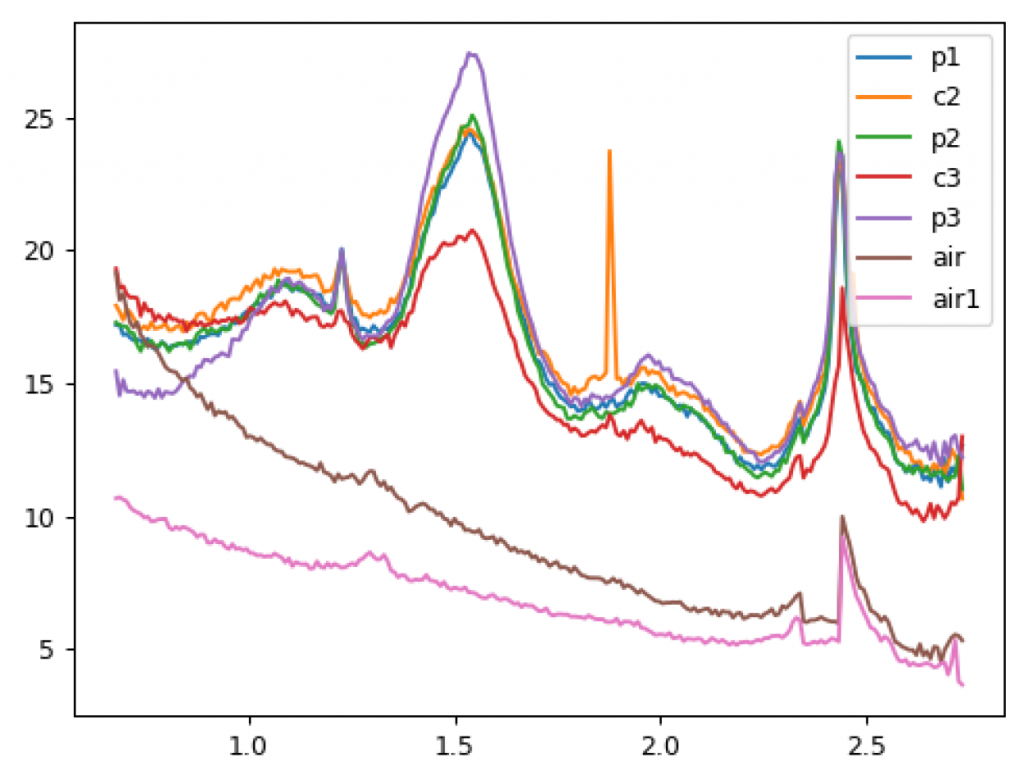 Figure 2. X-ray scattering patterns. The x-axis is a distance coordinate with larger numbers indicating smaller sizes in the sample. Curves labeled c or p are cellulose mats, the two curves labeled air are made without any cellulose mat.

With the mat mounted, we put it in the beam and looked at the diffraction. And hey presto! it diffracted (Fig. 2). We got peaks! Well, strictly speaking, we got rings. The diffraction pattern is circular because the cellulose mat is isotropic (the same in any direction). To get the line with peaks (Fig. 2), the software averages intensity in a circle at each radius, turning rings into peaks. In previous forays to BNL there were no peaks. We won’t know whether the peaks are “correct” until we calibrate the x-axis coordinate, but they look about right based on a back-of-the-hand calculation.

The figure shows a bunch of curves that look similar and two that look different. The ‘different ones’ are labeled ‘air’ and ‘air1’, and are colored brown and pink, though what really sets them apart is that they just slope gently down across the graph. At around 2.5 on the x-axis, there is a weird little jagged pattern, looking a little like the top of Australia. That disturbance is caused by a piece of shmutz on the mica window that keeps the beam under vacuum (everywhere except around the sample). For averaging radially, the shmutz is masked out but for the quick-look-see we did for the figure, the masking was off. Ignore it. The air curves show the scattering pattern without any sample. It represents scattering by air. Eventually we can subtract off the air scattering to look at the results just for cellulose.

But there is one other interesting thing about those air curves – the two of them differ. They were obtained for distinct positions with respect to the brass hole. I am having trouble getting my head around how the air can differ in different regions of the ‘hole’ but apparently this is an effect that Lin was expecting and so we captured scans for various positions within the hole to get a feeling for how much the thing varies and to figure out the most inert way to subtract out the air scattering from each cellulose curve.

Now, each curve in the figure represents a single diffraction pattern. But because the beam is small, around 5 µm in diameter and the sample area is 2 mm wide, we got diffraction patterns for 1600 spots (scanning in a 40 x 40 grid made the square in Fig. 1). Scanning is automated and taking half a second per pattern and less than that to move the sample holder between patterns, the set of 1600 was acquired in 15 to 20 min. We did this for three control samples and three experimental ones (I’ll get into the experiment we did another day). When all of 1600 are averaged together, we should get a nice representation of how the X-rays are seeing the cellulose and whether the control differs from the experimental. After all that, we drove back to Amherst and got home around 9 PM.

← Measure for measure
Scientist as trucker →