No, I haven’t decided to write a novel. And no, I am not being quaint when I use the word ‘literary’ to refer to the work on manuscripts and proposals that has occupied my fingers since the last post, several weeks ago. To the contrary I am making a point. I know, I know, this blog is supposed to be pointless! I mean, is supposed to make its points about experiments, not issues. But after the last post, my time in the lab has been confined to returning odds and ends I had borrowed for my MBL outpost, packing up the flasks and other gear, and then unpacking them back at UMass. Really, describing how I carefully smoothed out the bubble wrap, sorted it by size, and put it in the file cabinet is too droll even for me. Therefore, rather than another blank, this post is about an issue. If it helps, the issue is one that motivates me to write this blog. Still if you want to read about experiments or nothing, then you should probably stop here. 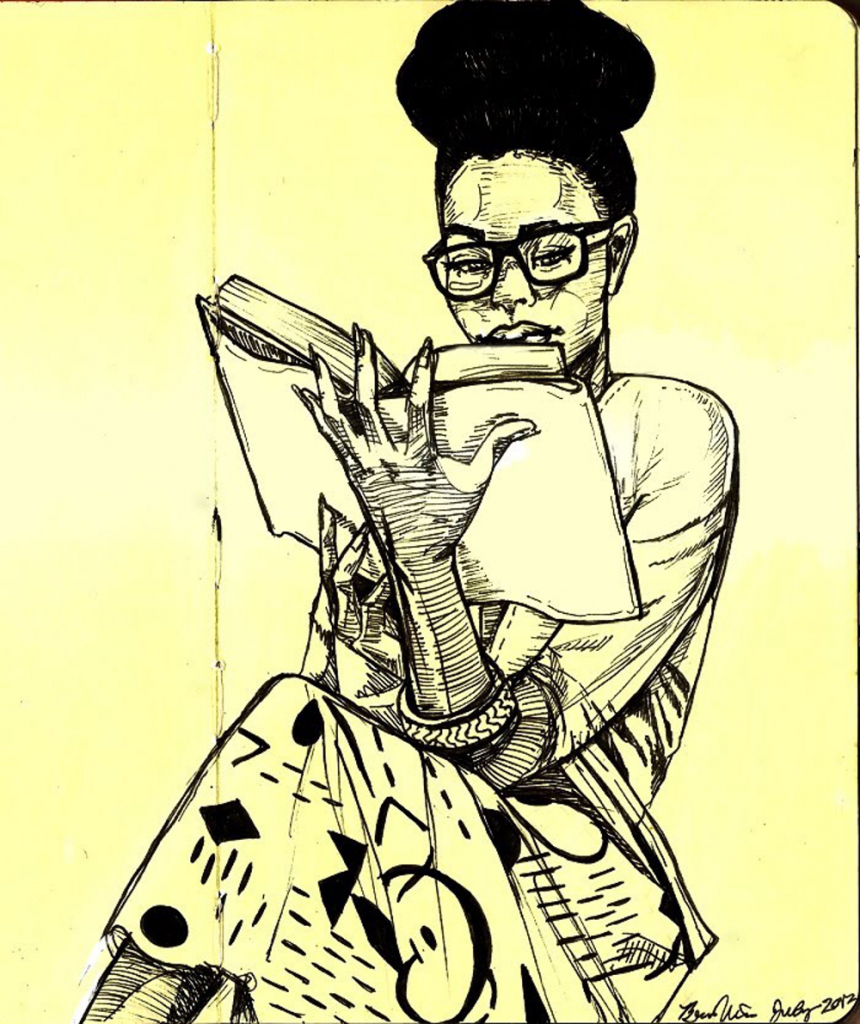 Image of a literary pursuit from here.

For a scientist to call their writing projects (journal articles, grant proposals) literary sounds ironic, at best. This is true despite the fact that taken together scientific journal articles are invariably called “literature”. But precisely nobody reckons all those articles in (for example) Journal of Biological Chemistry  to be remotely equivalent to Jane Eyre.

But everyone should. Here’s why. A journal article and a short story have lots of words, they are long pieces of writing. Length alone places them in a different category than instructions on the microwave rice box. Both are narratives, accounting for protagonists to whom something happens. In a journal article, the protagonist might be a seedling root and the story might tell how the root responds to blue light and what kind of bits are recovered when the root is ground up in blender; in a short story, the protagonist might be a pregnant archeologist who discovers at her dig the bones of child, but one buried just a few years ago. While we want to hear different things about a root and an archeologist, telling their story inevitably involves a timeline (even if it is to be subverted) and a series of events leading some kind of resolution. These similarities are strong.

Fine, the sense in which a short story and a journal article are both narratives might be too abstract to convince you to yoke them in literary solidarity. The linchpin then is creativity, a trait needed in hogsheads for telling either kind of story. For the short story writer, this is taken for granted; we get that they had to invent the archeologist and the murdered child and we give them extra credit, or perhaps the reverse, for the pregnancy. We admire their vision for creating a world, animating their characters, and giving them things to do sufficiently interesting that we keep reading (for days, in the case of a novel).

In contrast, to the writer of a journal article, we rarely if ever assign creativity. But this is a mistake. After all the clever apparatus has been built and the mice or worms run through it; after all the weights and lengths have been recorded; after all the blood or muscle has been ground up and the components enumerated; there is nothing. There is nothing until the scientist writes an account of what happened. If you hung up a web cam in the lab and published the feed, this would not be a journal article, and neither would writing down every move that everyone made in the lab, day after day after day.

A journal article conveys the weeks or years of experiments by distilling them into concentrated form, a distillation that requires ingenuity and thoughtfulness. And don’t forget vision. Experiments are not done in a vacuum any more than characters wander through a short story aimlessly. Ideas in a scientist’s brain while the experiments are going on might resemble the firmament on the second day of creation. Writing the article precipitates them into a solid if not crystalline form. All this distilling and precipitating requires command of language, a prowess we otherwise recognize as literary ability.

Now, here is the rub. Scientists being as a rule unaware of, or even opposed to, the idea that they are creating actual literature, neglect the one person that every short story writer holds dear: the reader. A short story writer pays attention to the audience and to reviews of their work. In contrast, once the acceptance notice arrives, the journal article writer goes on to the next one. To them, the reviews matter only before publication and while accruing a bunch of citations is nice, those are invariably assigned to the importance of the results not to the quality of the writing. Alas, by ignoring the reader, by ignoring the creative nature of their writing, scientists’ articles are difficult to read. We read them usually because we must, rarely because we want to find out what happens at the end.

Scientists need to claim their writing as creative, no less so than writers of fiction. By accepting this reality, we will make our ‘literature’ worthy of the name. It will become enjoyable to read, with correspondingly massive gains in progress.