From pictures to data

It is a hundred million degrees outside, more or less. A good day for writing, if not dozing on the couch.

Bits of progress in the lab last week. I brought back a cellulose prep that Eri made with the key change that it was never dried (see near the end of a previous post). Success, in that the giant mat of ‘cellulose paper’ was gone. But failure, alas, in that the prep contained, instead of the wee wispy cellulose fibers of my dreams, nothing but whole cells. Well, not cells as such, but the flattened out ghosts of cells. Eri’s treatment removed the cytoplasm and everything that is not cellulose from the wall, and left behind a cell-shaped cellulose skeleton. Evidently the network of cellulose microfibrils encircling the cell has sufficient integrity to hold together while being boiled in acid. In hindsight, this makes sense. But it certainly put the kibosh on having isolated fibers to image.

I got back to MBL late on Tuesday, having delayed driving back to hear Ellen talk in lab meeting and then taking the lab out for lunch. Sadly, when I went to passage cells that night, the culture was way too light. Something was wrong. I passaged it anyway and then took a look at the too-light culture. The cells looked … demented. Some of them were tiny compact filaments, resulting from several rounds of division without expansion at all. And yet others were the opposite – super long tubes, resulting from expansion without any division. I could not see any visitors – bacteria or fungi, but they might have been lurking. This wonky culture meant that during the week, I could do no fresh imaging.

Instead I measured. So far, the images of the xylem cells I have been getting in polarized fluorescence are pretty. But do the images make sense, based on what we know about the cells? We solved the erroneous calibration problem but that was rather gross. The week before, Mai and I had imaged cells stained in two concentrations of fast scarlet differing by a factor of ten. They looked similar by eye – but how about by number? To find out, I got on the measurement stick.

OK, there isn’t a stick. But there is an image stack, which contains both the raw images acquired by the microscope with various settings of the polarizers as well as calculated images. What’s more, we collect data at series of focal planes, perhaps a dozen or more, starting from one surface of the cell and moving to the opposite surface. Each focal plane has its own stack of raw + calculated images. The end result is, if you will, a stack of stacks. Clearly for building up a 3-D structure we need information from all over the cell but even for looking at it in 2-D, some structures are in focus in one plane, others in another.

Now, in the stack for a single focal plane, there are three calculated images: fluorescence, anisotropy, and orientation. The first one (fluorescence) averages the raw images and thus produces an image that is insensitive to polarization – this is equivalent to what would be seen in an ordinary (i.e., non-polarized) fluorescence microscope. The second one, anisotropy, is a measure of how much the fluorescence differs when the exciting light is polarized at one orientation versus at 90 degrees to that orientation. And the last is the orientation, defining the direction along which polarization will produce the strongest fluorescence.

Happily, in the measurement software, ImageJ (which is free and awesome, and by the way can do many of things that Photoshop can do), I draw a region of interest on the first image of a stack, measure some quantity, and when I move to the next image in the stack, the region stays put exactly. Thus, I can measure fluorescence, anisotropy, and orientation for the very same region. Now to be clear, what I am “really” measuring is the average intensity (gray level) of the pixels in the region. For fluorescence intensity, I can just report those gray levels, there is a one to one proportionality. But for orientation and anisotropy I have to multiply by the appropriate to conversion factor to turn gray levels into the quantities of interest.

The xylem cells have bands and regions between the bands. I measured both, as many of each as were clear (Figure 1, 2). For the bands, the low concentration of the dye (open circles) tended to give rise to lower values of anisotropy. But this was not associated with a difference in average fluorescence between high and low concentrations. There were some dim bands at the low concentration but also some really bright ones. The same thing is seen for the inter-bands (Figure 2), namely the lower concentration had lower average anisotropy but similar fluorescence compared to the higher concentration. This is odd. More dye in the cell’s surrounding is leading to ‘better’ (i.e., more aligned) binding to cellulose, but not because more dye molecules are binding in total (that would raise the fluorescence). 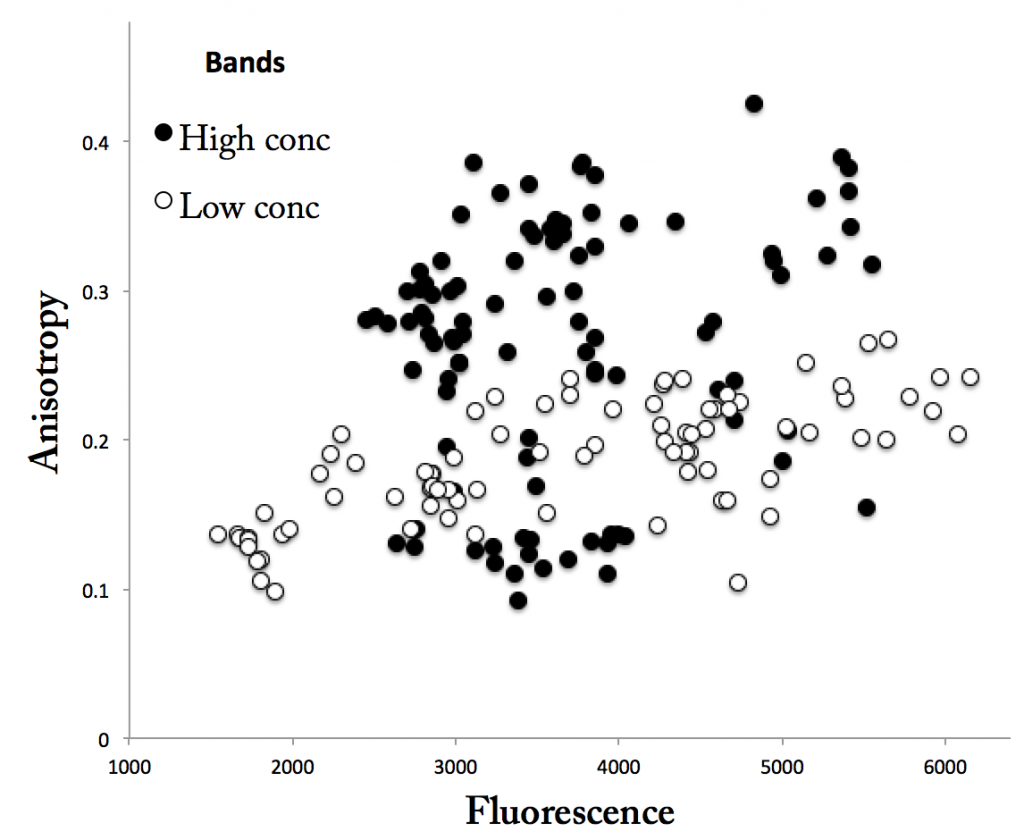 Figure 1. Fluorescence anisotropy versus fluoresence intensity for xylem bands. Each symbol shows the data for a given band. Anisotropy values vary from zero (random) to 1 (perfect alignment).

Given that oddity, the easiest explanation is an effect of sampling. I did check the background intensities and they were fine, indicating that there was not some problem with the slides. I had only three “stack-stacks” for each concentration (with one or two cells per stack-stack). Maybe the cells in one set or the other were not representative? That was the only time we imaged the low concentration but the high had been imaged on other days. I measured one of those and found that its data superimposed on the high concentration data seamlessly. I have two other stack-stacks to check as well. I might have another imaging session with the low concentration although I am not sure it matters: it is not as tho the dye is problematic at high concentration. 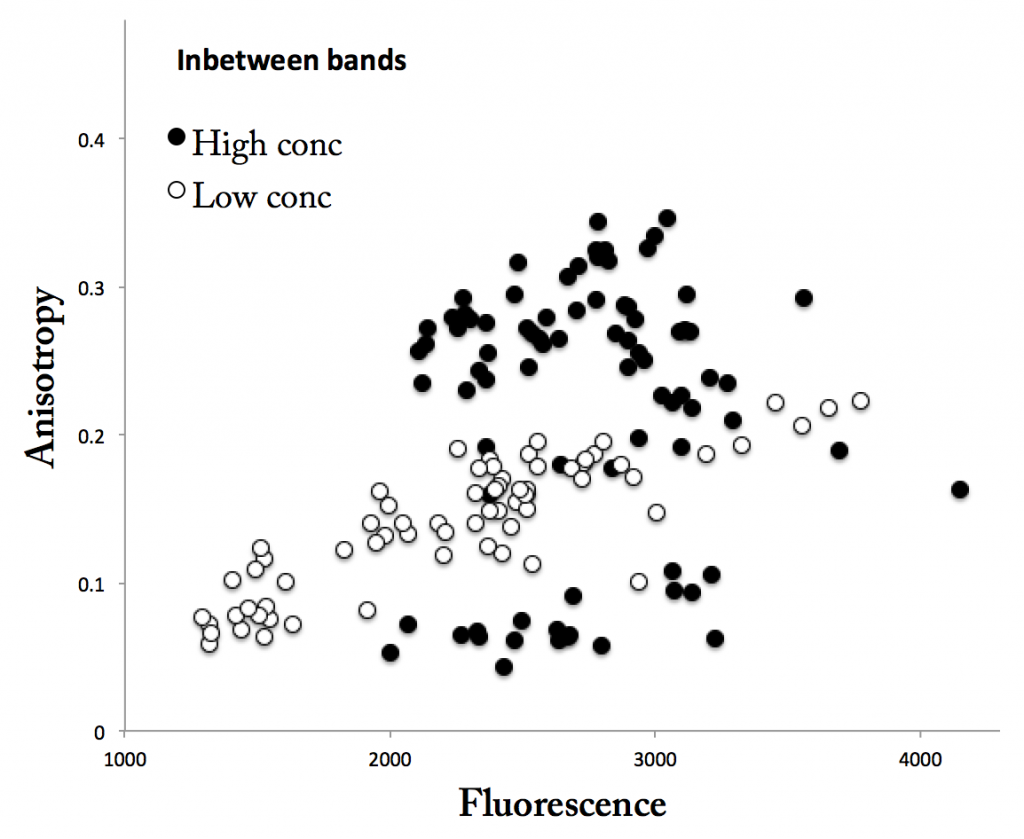 Figure 2. As for Fig. 1, but data for the regions between xylem bands.

I should add that the plots of anisotropy vs orientation were totally random, as one would expect. The cells are deployed randomly in the field and no angle should be privileged over another. That’s what the data show, which is reassuring.

I’ll be brining back fresh cells with me tomorrow and hoping they thrive.