This week I set up shop in Room 110 Lillie Hall of the Marine Biological Laboratory (MBL). Room 110 and its neighbors belong to Rudolf Oldenbourg, with whom I’ll be working for 1o weeks this summer. I am the proud and perhaps not-humble-enough recipient of a Whitman Center Fellowship. This pays for accommodation at MBL and grants me the right to work there. Typically, a Whitman Center fellow gets their own lab space but because my project is with Rudolf, I am based with him. 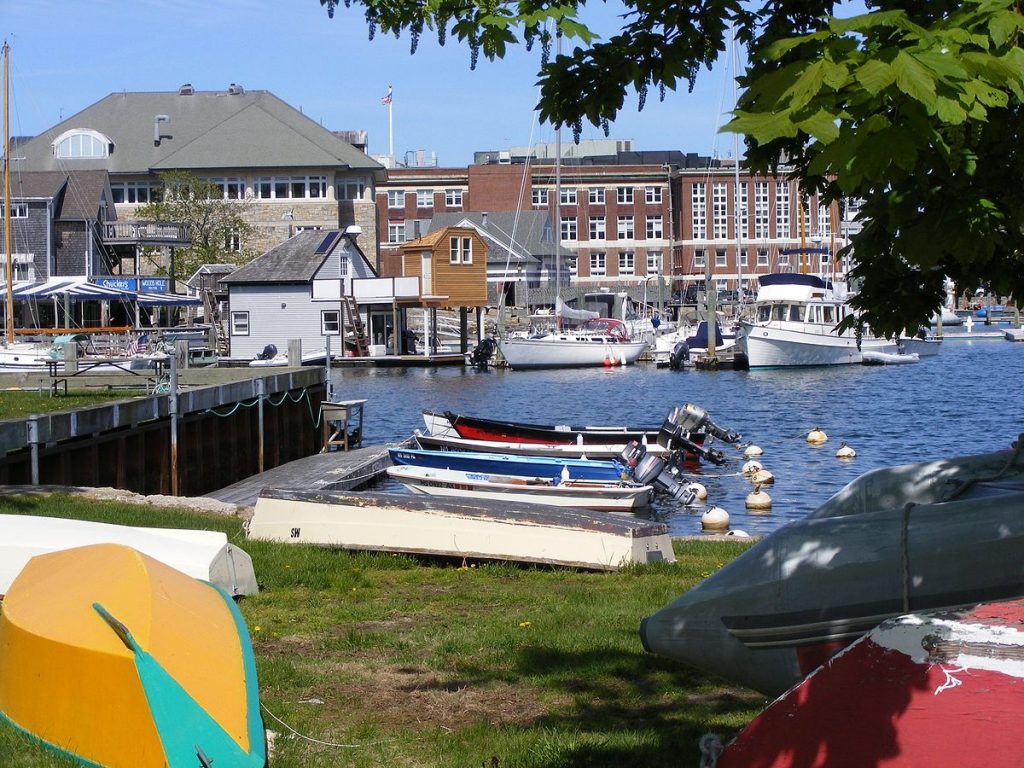 MBL from across the eel pond. Picture from here.

The project is to advance polarized-light microscopy to become three-dimensional. Polarized  light has always attracted me, of course because of the beautiful subtraction colors it offers up (Fig. 1), but also because the method gives information at the molecular scale – namely how a molecule is oriented in space. A polarized light microscope lets you see, with your eyes, the arrangement of molecules in matter. When Paul Green taught this to me, something gonged inside, and the echoes linger.

Classically, imaging with polarized-light microscopy reveals molecular orientations that are within the plane of the microscope slide. This means that its use has had to be restricted to relatively thin objects and only in-the-sample-plane orientations can be detected accurately. A relatively planar object that has been illuminated by polarized light microscopy is the mitotic spindle. In my own work, I am interested in the orientation of cellulose within the plant cell wall, an object readily imaged with polarized light, provided that the plant material is embedded and sectioned (Fig. 2). 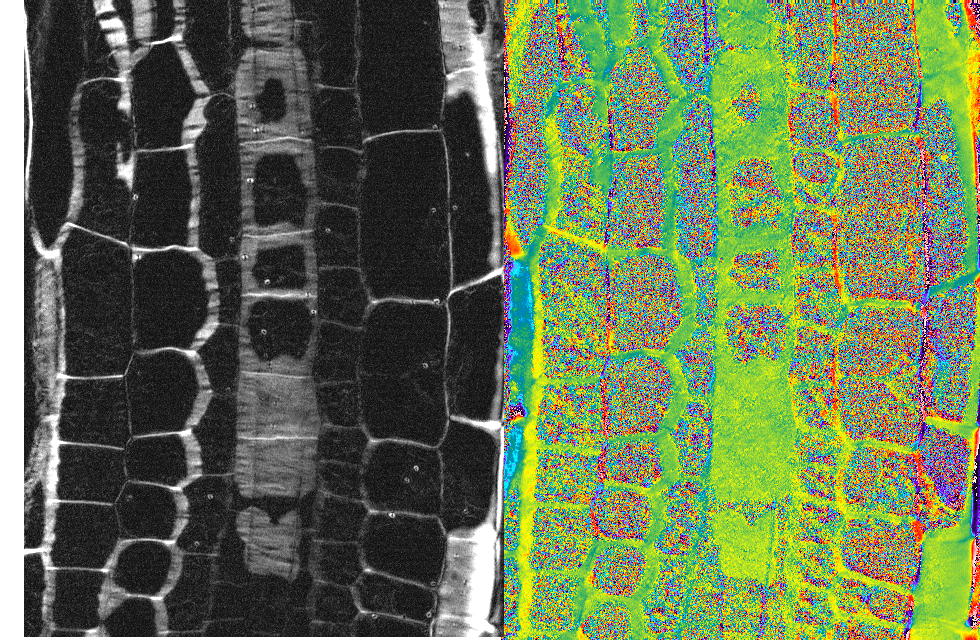 Fig. 2. Polarized-light micrograph of plant cell wall. The material is a section of the root of lab weed. The image on the left shows the birefringent retardation (representing the amount of oriented material), the image on the right shows orientation, with a pea-green color representing an angle going from left to right across the page. Images obtained by using the LC Polscope invented by Oldenbourg.  More details here.

Oldenbourg seeks to advance polarized-light microscopy so that it can resolve orientation in any direction. Essentially he is making the method tomographic, building up the full three-dimensional from a host of sampled planes. If this sounds difficult, it is. He has succeeded with thin sheets of calcite crystals, where the optical axis of each domain can be resolved whatever its orientation. But these samples are still thin and are extremely well organized. Working with an intact plant cell let alone a tissue remains out of reach.

I am bringing to the table an object that is more difficult than a film of calcite crystals but we hope less difficult than a living cell: namely, a xylem cell (Fig. 3). Here, the wall is present mainly as thick bands. The cellulose is strictly parallel to the bands, meaning that we know what the orientation is and can use that information to constrain the algorithms for building up the three-dimensional structure. Also there is a lot of cellulose in the bands, meaning that they will produce a large signal for the method. Finally, the cell is dead, allowing, meaning that we don’t have to limit the imaging conditions to those compatible with life. If the xylem cell works, then a regular living cell can be tried. Where do I get xylem cells? Happily, good old tobacco BY-2 cells can be tricked into differentiating into tracheary elements, meaning that with relatively little fuss I can get a flask full of suitable cells for imaging.

OK, that’s the background. What I did last week was to set up a cell culture system in and near Rudolf’s lab. I got the orbital shaker I had reserved brought up from the Apparatus Room (thanks Bill Haskins!) and dutifully covered the acrylic lid with foil to keep down the light. It is sitting next to the tanks of sea urchins and tunicates that Tomomi san grows. Then I had to scrounge hardware for securing flasks. This took me to interesting corners of MBL and in the end I have enough clips for both 250 mL and 50 mL flasks. I got some of the latter from Zoe Cardon’s lab (they grow algae) and I brought a few from home. I received autoclave training and between getting those instructions and coming back with media a few hours later, it had broken. Fortunately someone told me about another autoclave across the street that happily was functional and available.

I received training on how to use the sterile hood. This unit is run by the Central Microscopy Lab, just upstairs from Lillie 110. I met Kasia who took me through the rules and gave me a key. The bad news is that there is no gas. But there is UV and it seems to be clean and I am hopeful that by working quickly, I won’t need a flame. We will see. With everything set up, I drove down to Amherst, and came back the next day with cells. Two of the cultures were just placed in the shaker for imaging later in the week and the other was for passaging. I brought cells and media up to the hood. But I seemed to forget everything. I went back down stairs for a pipetter only to realize when I got back upstairs that I hadn’t brought up tips. And so it went, me proving to be exceptionally forgetful. It might be that this was caused by the throbbing pain in my shin. For all of these trips up and down stairs, I was limping.

Pain might also explain a pretty careless thing I did, or maybe the carelessness is just innate. I needed to make kanamycin. The BY2cell line I am using harbors a transcription factor under an inducible promoter: this is how the cells can be cultured but then induced as needed to become xylem. That’s a terminal a step so the induction part is required. Apparently, if the selection agent is not maintained (that is, the kanamycin) the cells inactivate this inducible gene. I weighed out kanamycin powder on a balance up near the hood, brought the powder to the hood, added sterile growth medium, and aliquotted for later freezing. Then I added the relevant amount of the newly made kanamycin stock to the medium in the flask, added cells, and brought it back to the shaker. And then, ka–ching, realized that I forgot to filter sterilize the kanamycin. Crap crap crap. It is mildly ironic to think about bacteria resting on a pile of antibiotic powder but there probably were plenty there, only too happy to awaken to the sucrose in my flask. Sigh.

The next day, I scrounged a filter from the ever helpful Tomomi lab, made more kanamycin and this time, sterilized it. I think I will need to get another back of cells from Amherst because I expect that this Tuesday when I go to sub-culture, I’ll find a flask full of more than BY2 cells.

On Friday, I worked with Mai, Rudolf’s former Ph.D. student – now postdoc. She drove the microscope and we looked at the cells Eri had given me specifically for observation. We first imaged cells for birefringent retardation and next we used polarized fluorescence, having stained the cells with fast scarlet (who sounds like a character in a noir movie but who, dissolved in 3% sucrose, instead looks like red Koolaid). The cells were healthy and seemed to give useful images in both modes. Mai is going to try to reconstruct the shape of the cell and the orientation of cellulose based on the polarized fluorescence. It will be interesting to see how far she can push this, just from the start here.

The cells had not been induced so there were no tracheary elements. We have that excitement to look forward to next week.

← A star in my roots
Red bands of courage →