A star in my roots

I am writing this en-route to China (Saturday, May 12). Last week, I continued the root section prep started the week before. I dried the roots out of t-butanol, mounted them on stubs, coated with platinum, and looked at them through the SEM. The problems started with mounting. As I pulled the samples out of the vials, working through a stereo dissecting microscope to avoid damaging them, I could see that the vials were dirty. Their inside surface was coated with little humps of crud. Not sure where it comes from, the vials only see ethanol and t-butanol. Could part of the rubber inside the vial lids be decomposing?

I treasure these vials because their necks are shallow. I actually brought them back with me from Canberra at the end of my postdoc, thinking to buy more for my new lab. Typically they are disposable. I found out that the UK company that makes them sold them by the 100,000. I don’t remember the exact number but it was a wholesale quantity beyond a doubt. This fit with the fact that I got them from the RSBS store room. A few years ago I asked my Aussie friends who told me that they don’t have them any more. I also asked friends in China. As far as I can tell from the internet, this kind of shallow necked vial is no longer made, anywhere. The shallow neck lets me get the tweezers down into the vial to pick out the sample. There may be nothing for it but to buy new ones and make the best of it.

The next problem was Xena, warrior sputter coater. Lately when the platinum plasma fires, the vacuum degrades substantially. I know from experience that if I turn off the plasma and re-evacuate, she will refuse to fire, for ages. So instead I just coated anyway, extending the time a bit to allow for the worse vacuum. But not enough. On the microscope the next day, the samples charged. I could look at low magnification, more or less, but not at high. It didn’t really matter because there was a ton of cytoplasm left behind. I had been vaguely worried about this, one reason for trying this prep. My worries were borne out. I think I can take care of that with more aggressive rinsing after sectioning. Perhaps with higher detergent, higher salt, maybe both. A few trials in my future.

Just as I was feeling quite sorry for myself over all of this, I saw the star. Like any beacon, it lifted my spirits. Thanks to Googling by Laura, it seems to be a stellate trichome, as popular among Malvaceae. Presumably floated out of a garden somewhere to land on a root section. 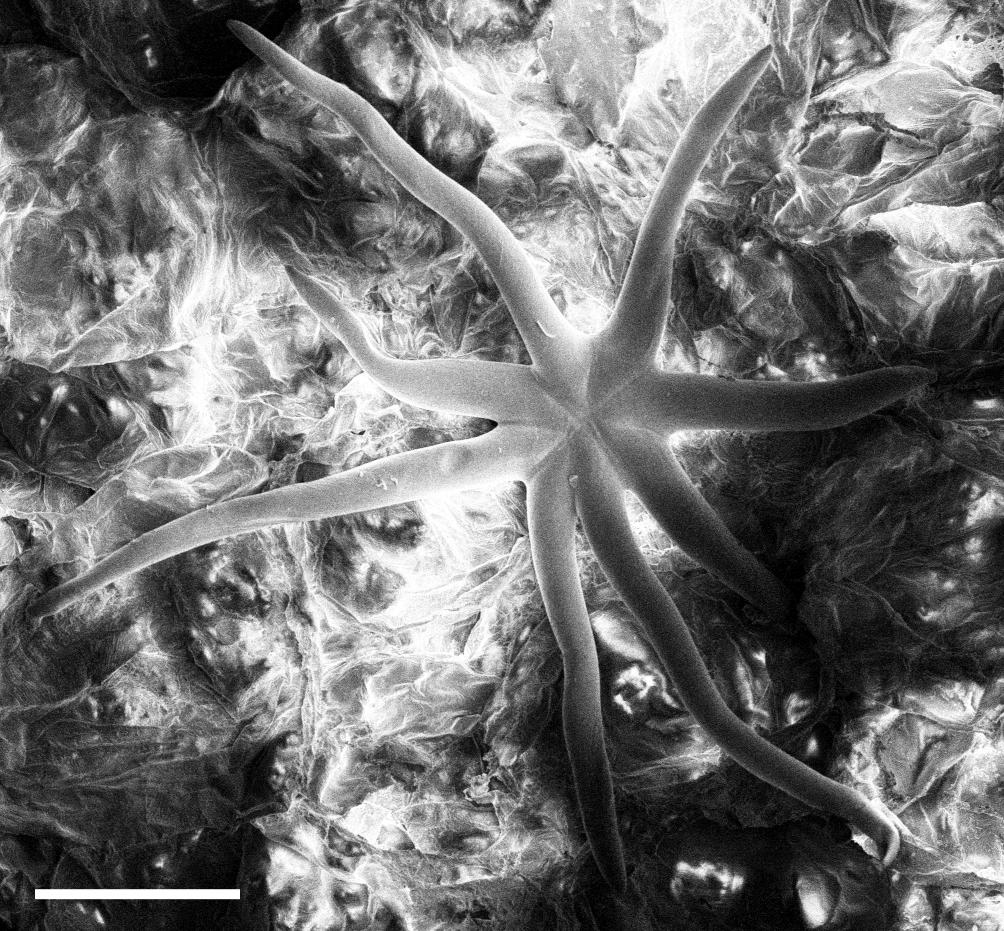 The star in my crown, or rather the stellate trichome in my root section. White bar = 50 µm.

← Getting maize ready for its close-up
Marine Biological Laboratory →