Getting maize ready for its close-up

Posting, at last (!) after a few weeks because I wearied of writing about impediments to lab-work. But this past week, I lab-worked. On Monday, I set up maize seed for germination, in the handy rig with the hands. On Tuesday, I made two agar plates, one control and one containing 300 nM oryzalin, and brought both down to the red room so they could come up to temperature. On Wednesday, in the red room, I transplanted four seedlings onto each plate. At that time, I discovered that the knob on the space heater had gotten nudged so it was a bit too warm in the room, which presumably explained why most of the roots were too long to transplant. Happily I found a few shorties to transfer.

On Thursday, 20 h after transplanting the seedlings, I put the plates with seedlings in a black box and moved them from the red room to my lab (down the hall and up the stairs). There, I used a Vibratome to cut sections of each (Fig. 1). Vibratome sectioning is great because instead of having to embed the sample, it is just glued onto a stub with superglue and sectioned. Twenty seconds after the glue sets, I put a drop of saline solution over the hunk of root on the stub allowing me to cut sections in solution. This helps wash away cytoplasm. I collected the first glancing section from the edge of the root in one dish, one or two sections from the mid-plane of the root in a second dish, and the sections in between in a third dish. I did this for two control roots and two oryzalin treated ones. I sectioned them in the morning and during the rest of the day, I dehydrated them, allowing them to spend about 1 h in each step of a graded ethanol series. They languished in 100% ethanol overnight. 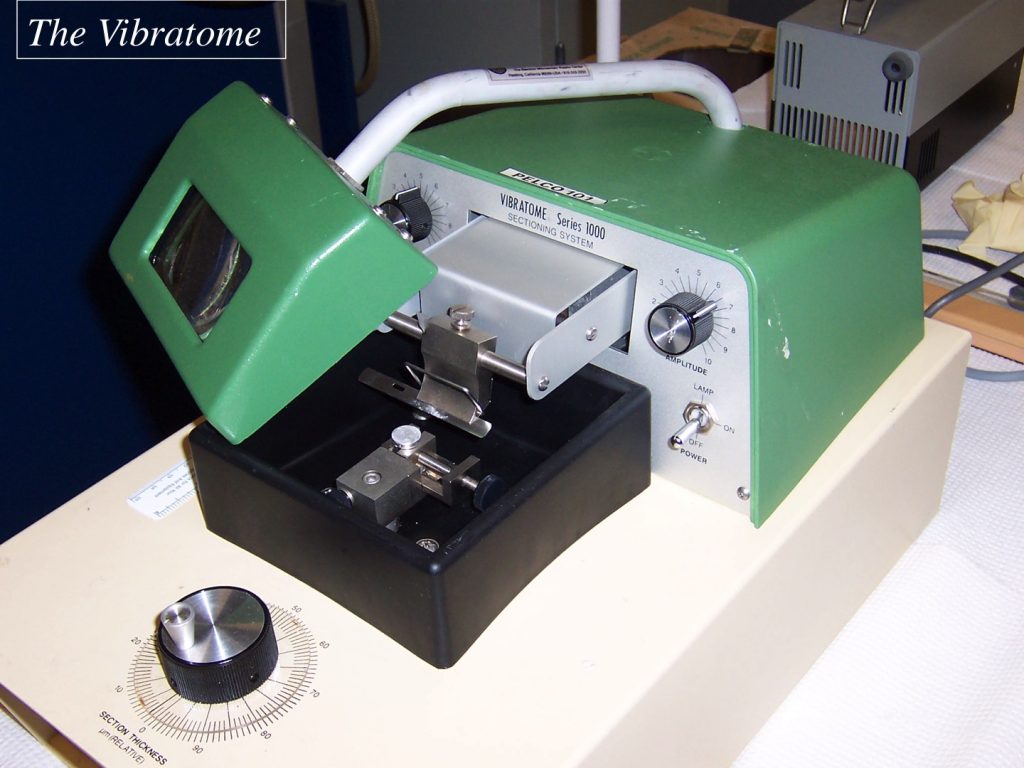 Figure 1. A Vibratome (tho not the very one in my lab). The sample is glued onto the stub and the machine brings a razor blade up to it and cuts while vibrating.

On Friday, I moved the sections from small dishes to small vials, and then replaced the ethanol with t-butanol, giving them three changes during the day. They are sitting in t-butanol as I write. Next week I will remove the t-butanol by freeze drying, mount and coat the sections, and observe with SEM.

The main purpose here is to make sure that I can see the cell wall clearly in the growth zone of the maize root. I have made this kind of prep on various materials over the years, and every sample has its own little quirks. If I am going to have to shoot at troubles, the sooner I discover that the better. If the prep works, then I will check what 20 h of 300 nM oryzalin does to the structure of the cell wall. As I have explained before, I am doing this experiment to see how soon after adding oryzalin the first changes in cell wall structure become visible and compare this to how soon the root starts to swell. For that reason, looking at cell walls late in the game (i.e., 20 hours later) is a secondary concern. Still I need to have a look. Finally, I expect to observe mainly median sections, because they will contain the tip and thus the position of each cell in the root can be known. To a first approximation cells act as a cylinders and so each face of the cell probably acts similarly. But this need not be true. With the glancing sections, I can look at the face of the cell that is tangential to the root. It is a bit more trouble to collect those sections too but as I found out Thursday, not so bad. I will make sure they look ok too and if so see whether cell walls on tangential sections look any different than on radial walls seen in the median sections.