Tired today; no verbal pyrotechnics, but I do have some decent data to report. Yesterday, I sent most of the day at Brookhaven National Labs using the synchrotron light source. This is a continuation of work I started more than a year ago, and have described before (e.g., here). Those data are still inside the data press, so I’ll leave that for now. Instead, I will continue the maize root growth saga because, data.

Now that I have a setup for working with maize roots, both for getting good germination (complete with the helpful hands, see last week) and for treating roots with the inhibitor of my choice; and now that I have determined a strong but not over-the-top concentration of said inhibitor, the task now is to determine kinetics with which that inhibitor changes growth. I did the first experiment last week.

The inhibitor in question is called oryzalin, and its name suggests something to do with rice. I don’t know. It might have been developed for use in rice fields but in practice it is used on broad-leafed crops (e.g, cotton) to keep off grasses off. It is an agriculturally relevant chemical, but no longer in its heyday because many weeds have acquired resistance. Still, it is useful in the laboratory because it depolymerizes microtubules. The latter, a component of the cell’s cytoskeleton, are responsible for mitosis, separating the chromosomes, those storied Sherpas of the replicated genome. Without microtubules, cells in the plant root, or any exposed organ, cannot divide and while this does not kill the weed it certainly slows it down, an effect good enough to let the insensitive crop plant win. Happily, microtubules in animal cells are insensitive to oryzalin so during these experiments I don’t need to worry about my own little tubes.

In plants, microtubules have another important job, they help control the relative amount of growth in length versus growth in radius. A root is slender because its cells grow mostly in length but only a little in radius. However, without microtubules, this changes: cells grow similarly in each direction. The root swells up like a balloon, and accounts for the bulbous nature of the roots seen in the previous post. How is this control over growth in length vs radius exerted by the microtubules? How indeed. That’s what I’d like to find out. To be clear, we know the general form of the answer but I am interested in the fine print. In a later post, I will show some of that text through a magnifying glass.

For the kinetic experiment, I made a plate with agar medium containing 300 nM oryzalin. At time zero, I inserted roots into the agar, and put the plate in front of the imaging camera. To resolve the kinetics reliably, I set the computer to acquire images every 30 min (rather than every 60 min, as before). After 24 h, I retrieved the image sequence and spent the next few days measuring lengths and widths. To minimize error, I measured each root three times and averaged the three measurements. Here are results, starting with elongation rate. 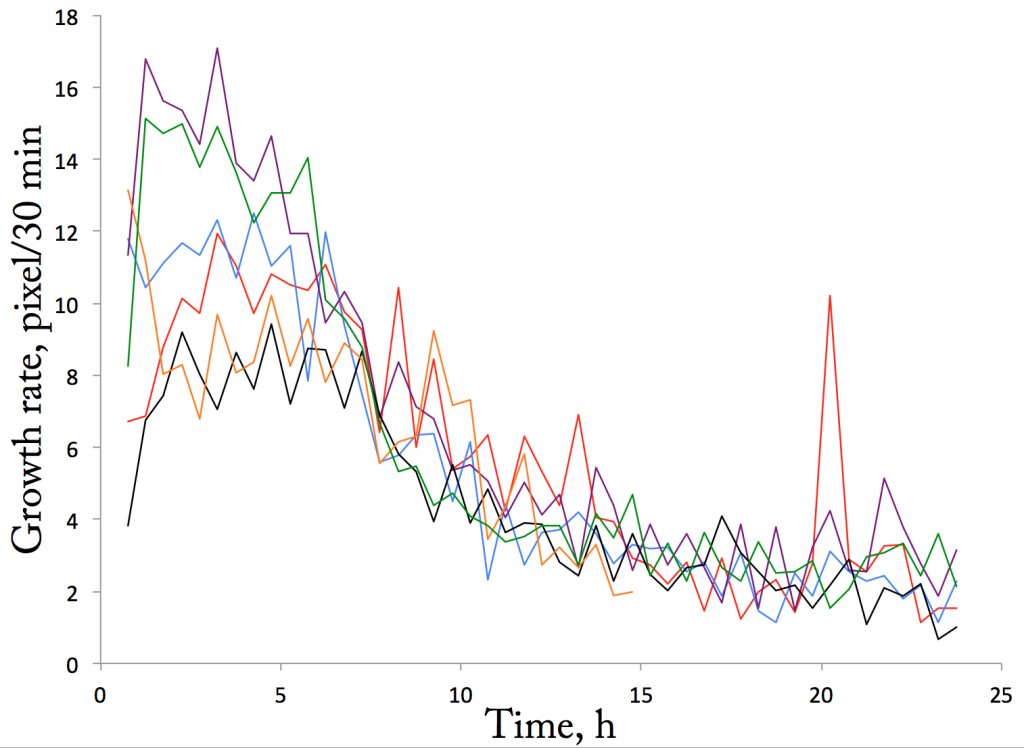 Figure 1. Elongation rate verus time for six roots transplanted onto 300 nM oryzalin at time zero. Each root shown in a different color, and each curve is the average of three replicate measurements.

Here are elongation rates for the six roots (Fig. 1). The y-axis has a pragmatic measure for elongation rate (pixels / 30 min) because I was too lazy to convert it to mm/h. The roots grew at a roughly steady rate for about five to six hours, before slowing down. At about 16 h, the roots again grew steadily, albeit much more slowly than initially. There is one root (the red one) with a wild point at 20 h, but otherwise, each root’s record looks fine. The collective behavior is clear in the plot of the mean growth rate for the six roots (Fig. 2). 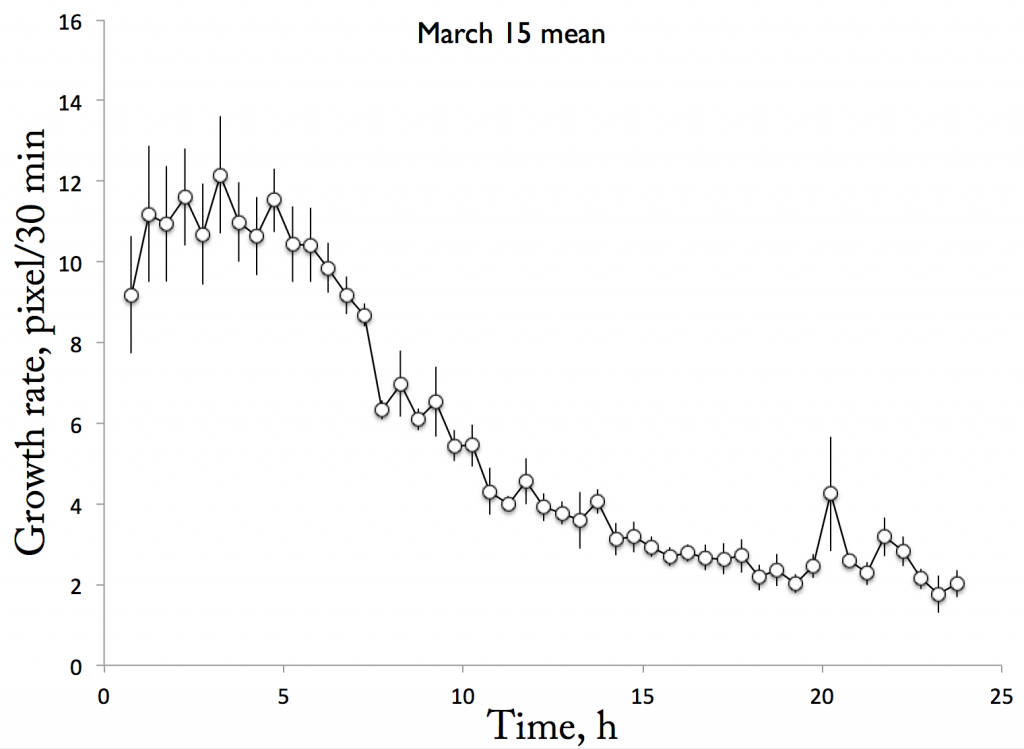 Figure 2. The mean growth rate, plus and minus the SEM, for the six roots shown in Fig. 1.

Elongation rate starts to decline notably around 5 hours after exposure to oryzalin. Good. Now, here is the diameter kinetics for each root (Fig. 3): 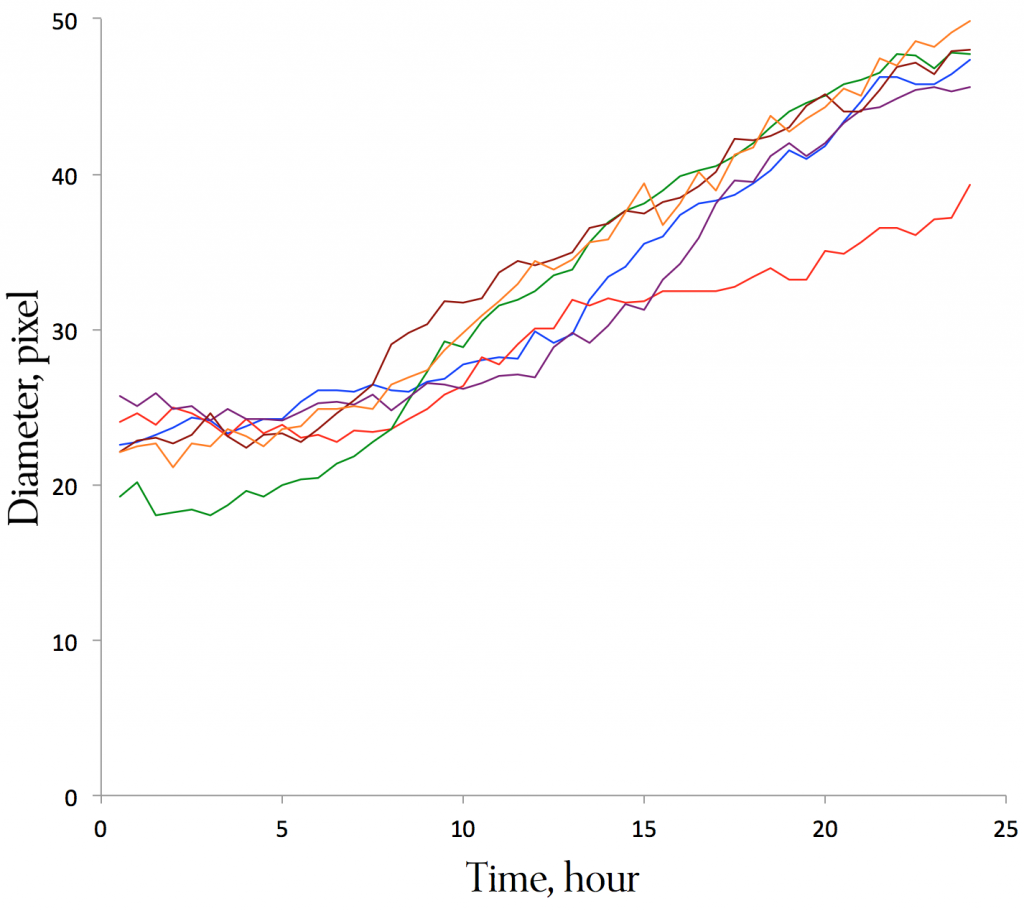 Again, the red root has an issue, in this case not getting as fat as the others. But in fact, this root grew towards and eventually contacted its neighbor and the two tips swelled up side by side. But not perfectly side by side: this root’s inner edge seemed to go under the other. It was ill defined. Therefore, for the average plot, shown next (Fig. 4), I deleted the points for this root after contact was made. 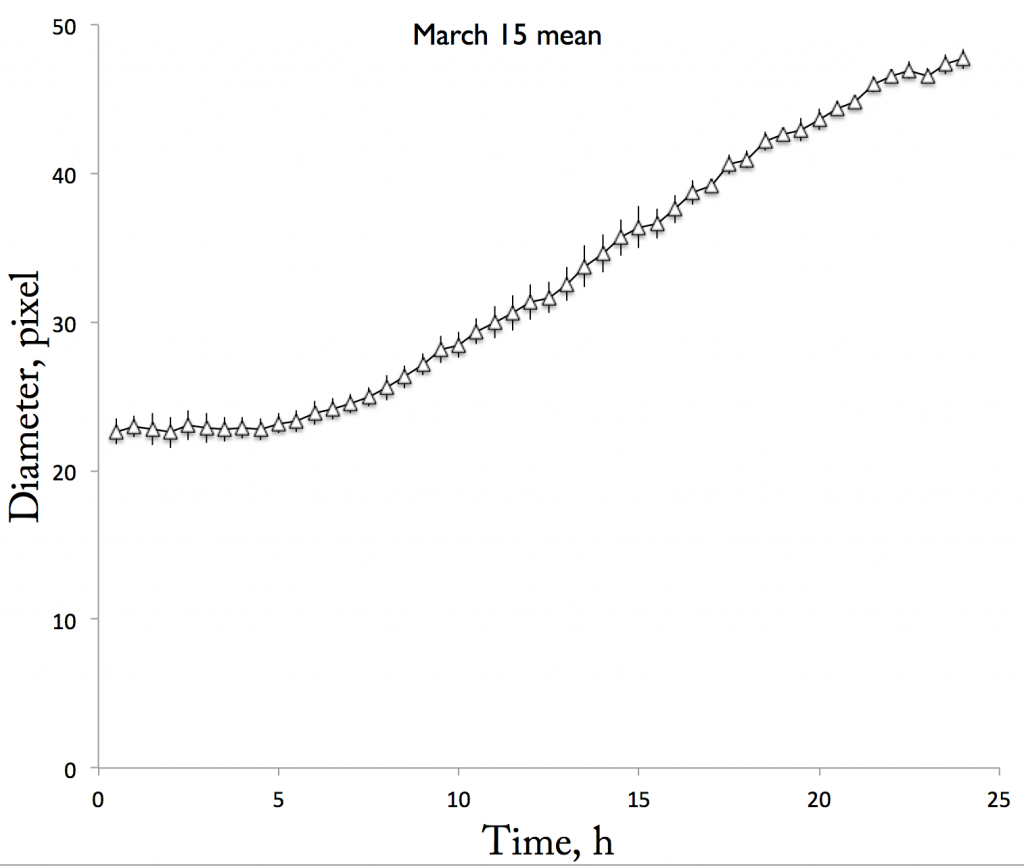 Figure 4. Mean, plus and minus SEM, diameter for the roots shown in Fig. 3.

Diameter was not affected for the first 5 hours. Then, after one or two hours, diameter increased more or less linearly to the end of the run. Linear time courses are nice. It suggests that after about 5 hours, whatever the loss of microtubules does, that thing remains in force for the next 20 hours, at least. Thus, to examine that cause, I can inspect the roots at 6 or 7 hours of exposure, by which time they will be launched on their trajectory of steady swelling but they will have hardly increased in diameter. Changes seen there can be confidently ascribed to the loss of microtubules and be considered independent of any change in shape.

It is interesting that the onset of swelling is more or less synchronous with the strong decline of elongation rate, robbing Peter (elongation) to pay Paul (radial expansion). Nevertheless, roots transplanted onto agar without oryzalin grow faster hour by hour (see, for example, here). That didn’t happen during the first 5 hours here, suggesting that the root notices the oryzalin within an hour. Whether this has to do specifically with the loss of microtubules or instead represents a generalized response to altered metabolism (“stress”) is a question for another day.

Now, because these kinetics will underlie a substantial effort to examine cell structure, the kinetics had better be reliable. So…repetitions first. Two more goes.