Hooray! The experiment this week succeeded. A watershed because I had decided, at last, all that setup work, tirelessly (tiresomely?) described here since October, had gone on long enough and it was time to move forward with the system. The first step forward is to find an appropriate concentration of the inhibitor, oryzalin. I have used this compound often in the past, but always with lab weed (Arabidopsis thaliana). Lab weed is a eudicot, a class of plant that is, at least according to folklore, less sensitive to oryzalin than are grasses, like maize. 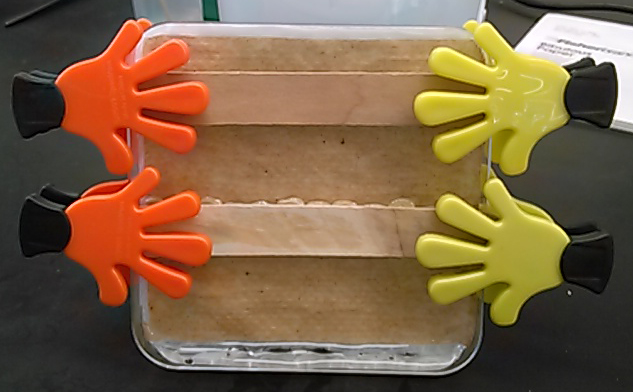 Figure 1. Hands on! Photo of the setup used for germination. The ‘hand’ clips hold a wooden slat and a towel doofus over a row of kernels. Two rows can fit on a single plate. On the lower row, the tops of a few kernels can be seen peeking out above the slat. The doofus is hidden by the slat. The plate is 12 cm x 12 cm.

To find that concentration, I set out about 40 kernels for germination. By the way, the germination side of the story has settled down into a reliable drill (Fig. 1), as follows. Into an empty square Petri plate bottom, I put 8 Kimwipes followed by a square of brown paper towel (the latter helps me see the roots in the dim light of the red room). Moisten thoroughly. Then I lay two rows of maize kernels on the brown paper towel and place over them a rolled-up and soaked brown paper towel (a doofus, see e.g., here). Over this, I place a slat of wood (a tongue depressor – say “Ahh”). Finally, I hold down the wooden slat (and hence the doofus and seeds) to the plate with a handy (!) clip. I tried the ubiquitous black binder clips but they are too strong and also at the drop of a drop get rusty. The whole assembly shown in figure 1 is then placed in a light-tight (ish) and water-tight box that has half an inch of water in the bottom. The water contacts the Kimwipes and towel and thus keeps everything nice and wet.

Two days later, I put germinated seeds on plates containing oryzalin. I inserted the roots into the agar medium, as described previously. I tested four concentrations (one plate for each) with six seedlings on each plate. I laid out all four plates and gave each plate its first seedling, then the next, and so on, up to six, thereby avoiding putting all the “best” roots on the first plate. It took about 5 min. Then, I air-taped the lid onto the plates and stood them up. I used a Sharpie pen to mark the position of each root tip. After that, I turned out the red light. 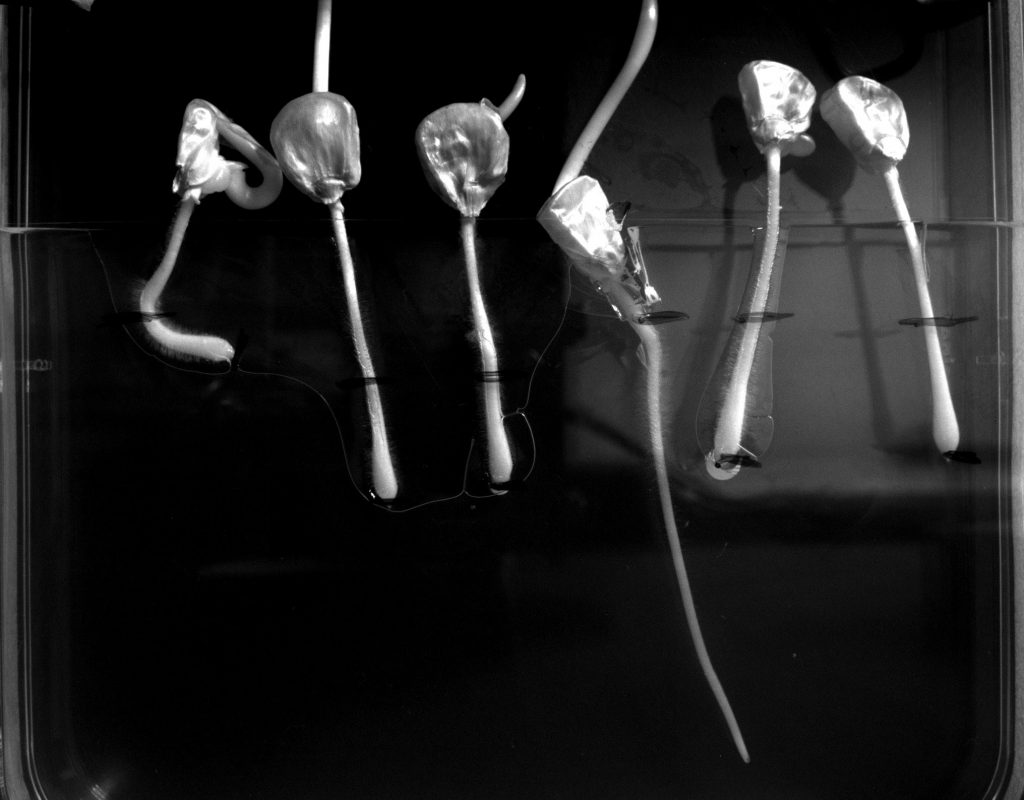 Figure 2. Roots inserted into agar containing 300 nM oryzalin. The position of the root tip was marked with a Sharpie pen right after insertion and again just before photographing 27.5 h after insertion. The fourth root broke out of the agar.

The next day, I marked the new position of the root tip and photographed each plate. As seen in figure 2, oryzalin inhibited the elongation of the root but stimulated growth in radius. The roots got fat. The fourth root in the image looks normal. Indeed, it broke out of the agar and grew in the air. The effect of oryzalin on the other roots is conspicuous in contrast.

From the photographs, I measured the length of the root between the marks and the diameter of the root at its fattest point (or ~1.5 cm from tip for non swollen roots). Here is what I got:

The controls (zero oryzalin) look fine. Their 56 mm over 27.5 h works out to just about 2 mm/h average growth rate, a number that is right in line with most of the previous runs. At 100 nM, the roots slowed down and swelled up; at 300 nM, they grew a little less and swelled a lot more (Fig. 2 shows 300 nM oryzalin). The diameter, 2.7 mm is three times that of control. Insofar as the standard deviation for root diameter, of both controls and oryzalin-treated roots, is 10% or less of the mean, a three-fold increase is a notable thing. At the highest concentration, there was yet less elongation and more swelling.

Also comforting, the response of maize was, indeed, shifted to lower concentrations compared to that of lab weed. In this case, the folklore turned out to be folkfact.

For subsequent experiments with oryzalin, I will use 300 nM. While I might squeeze out stronger effects with 1 µM, as the concentration goes up so does the chance of eliciting off-target effects. No reason to be greedy, 300 nM is strong enough. The next experiment is to determine the kinetics with which the compound alters growth. I predict that elongation will slow down before the root starts to swell, but it will be interesting to see how much time is required for either change to happen and how abruptly the growth rates change. That’s next…

← Outlaw of averages
Time course, round 1 →