Contemporary sculptors Richard Serra and Anish Kapoor might appear to be on opposite ends of the visual spectrum. On one end, Kapoor is known for his large energetic installations like Cloud Gate, 2006, in Millennium Park, Chicago, a 66-foot long, highly polished mirrored stainless steel “bean,” and his eccentric use of bright colors. Down at the end of the wharf sits Serra among his notorious towering sculptors made of rolled steel, which seem to be waiting to crush some unlucky viewer. The two artists are both known for the use of large organic forms and immense scale; their drawings suggest many more parallels. Both artists’ work suggests that drawing allows artists to escape the constraints of working with large-scale industrial materials, and is a necessary aspect of sculpture for its contributions to understanding and experience.

In the Five College collections exist two drawings by Serra and Kapoor. Kapoor’s Untitled, 1986, consists of gouache, gesso, and pigment on paper. This piece features a dark brown, almost scatological background penetrated by a rich blue vertical slit. This composition evokes the feminine body, an open wound, a hole in the ground, or a spiritual eye opening from the darkness. These themes relate to Kapoor’s stated belief in the feminine nature of all humans, which he believes is particularly important for his own creativity.¹ Kapoor references this idea in many interviews. While he feels he is masculine, he refers to creativity as something inherently feminine, as femininity relates to creation. This understanding suggests why Kapoor’s works make frequent reference to female genitals in abstract form. 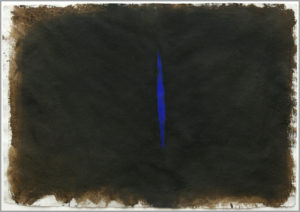 Kapoor’s 1989 interview in Bomb begins by addressing how sculptors use drawing, specifically in the modern age. I had always had an affinity for Serra’s work, and his large scale drawings also relate directly to the monumental abstract quality and symbolic forms in Kapoor’s drawing. Serra’s Untitled, 1973, suggests a fruitful comparison with Kapoor’s drawing. While this work is a lithograph and not a drawing, it strongly resembles a hand-drawn object and demonstrates the gestural nature of Serra’s drawing, in this case the action completed by the artist on the lithographic plate in order to make the print.

Kapoor’s work has away referenced themes involving life, death, spirituality, and religion. These, in Kapoor’s words, are all displayed through sexual forms, intended not to inspire erotic response, but merely a bodily presence related to the process of creation. This can be difficult to see at times, raising the question of artistic intent versus reception. While the forms may appear highly abstract to almost any viewer, to their creator they are representational in a symbolic sense. Kapoor operates on this high level of thought, creating symbolism on a massive scale, a process which demands extensive planning for his sculptures. While Kapoor began his drawing career employing a similar intention for a narrative reading in his drawings as he had with his sculptures, he eventually gave it up.² In the book Anish Kapoor: Drawings, Jeremy Lewison claims that Kapoor was compelled to change his method based on a deep personal desire to change his style of rendering. In this light, the drawing in the UMCA collection relates to Kapoor’s newer approach to rendering. Using the same visual vocabulary and color choice as in his earlier sculptures, he develops a bodily presence in his drawings. Following Lewison’s framework, the new style calls upon Kapoor to relinquish control over his intensive planning. Lewison contrasts the loose style of the drawings, and their liveliness, to Kapoor’s sculpture, which in most cases due to the material and intended narrative require immense thought and planning. Viewing the drawings as a collection, a sense of repetition emerges in both form or color combinations. Kapoor allows himself to experiment with form without committing the time and money required for larger piece. He can allow his thoughts and hand to guide him toward creating a work that lives outside of a narrative, and without any direct correlation to a sculpture to be constructed. That is to say, he can create drawings without thinking of how they will effect his following sculptures. 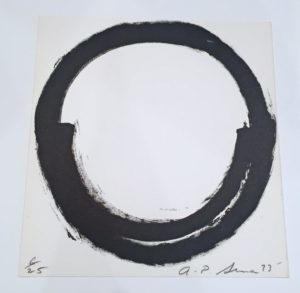 Richard Serra initially began his artistic career as a painter, but before long realized it was not for him. Not feeling the painterly urge of illusion of space or light, Serra valued the material over all else.³ In recent sculptures, drawings, and prints from Serra, this point is painfully obvious. In his large rolled steel objects, his roughly applied paint stick drawings, or purposefully placed stone installations, Serra’s work lives to be experienced. The drawings range from sheets of paper covered completely in black to compositions consisting of large geometric shapes and curving natural forms. The drawings all share a similar language: rough, thick application of the paint stick in multiple passes. The drawings seem, much like those of Kapoor, to speak to the sculptural in an experiential, and possibly even spiritual, way. Serra has stated that he wishes for viewers to come without preconceptions regarding the piece, so they are more inspired to generate their own thoughts and questions. This is important when considering his two-dimensional works.

Serra has referred to the making of his drawings as a method of comprehending a sculptural work he has already created. Being able to fully understand the piece as an object in the realm of drawing is, according to Serra, the most conscious space in which he works.4 Taking into account Serra’s interest in not preconceiving a piece before you view it, I think these drawings exist in a separate realm from his sculpture. Drawing allows Serra to transgress the physical limitations of sculpture and create works which could never exist. His compositions tend to be totally abstract, rendered in thick layers of paint stick forming shapes reminiscent of his sculptural forms.

They produce an almost “cinematic” method of viewing, not literally describing the culture of which they are a part so much as suggesting a possible memory of bodily experience.5 His drawings also exist outside of any created forms, such as the monumental, monochromatic drawings on canvas Judith and Holofernes he did for an exhibition at the Carnegie Museum in 1991. In these drawings reproduced in his 1993 interview for Bomb, two surfaces of canvas entirely covered in paint stick hung opposite each other, one set on the ground, the other twelve feet high. This gave the observer the feeling that the floor was shifting, relating to Serra’s longstanding interest in causing an intense bodily reaction. In comparison to the UMCA print and related paint stick drawings, Serra created a sensation in this installation rather than illustrating one. In order to suggest a sensation Serra invokes the cooling of the steel as its edges darken and its form is created, the sensation of looking upon the object from a particular angle, and the contrast of mass and space.

As a result of the two artists’ shared interest in scale, I would describe both artists as phenomenological. This term comes up in Kapoor’s interview, when he suggests that there are two types of Indian art: phenomenological and narrative. Kapoor classifies his own work as phenomenological, and states that narrative “story telling” is not for him. Serra’s work demands circumvention, when possible, and inspires thought of the possible verb which conceived it, harking back to the famous verb list Serra wrote in his sketchbook and subsequently carried out systematically in sculptural form in the 1960s. Kapoor’s work has taken many forms, but relies on the viewer’s relation to the work in either bodily scale or history, theology, or mythology. Neither artist deals explicitly with narrative, although Kapoor’s symbolic forms suggest traditional cultural forms. In addition to the artists’ stated interest in experience, the physical nature of both artists’ work relies almost exclusively on the materiality of the most visible layer of the piece. Serra explored this through his career by throwing, tilting, manipulating, and conjoining materials such as steel, rubber, and stone. Kapoor carried out his own exploration in the form of raw pigments applied and set on the ground, cuts made into stone, and large scale use of industrial steels and PVC. The painterliness of material and the physical presence of obstruction are given extreme life in spatially experienced pieces.

Both artists have intense planning processes with different goals in mind. Serra sees the planning as a way of flushing out ideas, and only completes the concept when he does not know the outcome. However, both Serra and Kapoor rely heavily on outside sources for the technical and engineering aspects of their larger works. With such a complex and collaborative process involved in making the sculptures, both artists find great freedom in drawing. Serra needs drawing in order to fully understand his own work, and sees it as a different way of understanding a piece post completion. According to Lewison, Kapoor uses drawing to create a piece based on his own expression, allowing the material to expand and create forms without premeditation. Kapoor developed a similar approach to Serra, whereby the true meaning of the drawing is the process of creating it.

Tracing the practice of these two sculptors back to their fundamental roots reveals striking similarities. Based on their own words as well as the formal analysis of their works, an argument can be made about the importance of drawing in relation to experiential art works. Many aesthetic parallels exist in these artists’ large scale feats of engineering, to create abstract art works that are the result of extensive planning. This combination of immense planning required for their sculptural works and the freedom made possible by drawing presents a striking parallel between their practices. In the world of contemporary sculpture, Kapoor and Serra truly are peers. These two have set the stage for the future of sculpture, and they have also began to reform and redefine drawing on their own terms.