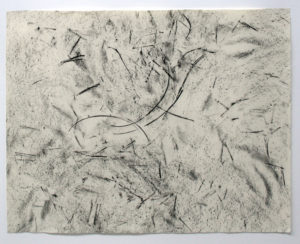 Historically, drawing has been used mostly as a teaching tool and a preliminary step to develop ideas before completing a painting. With the rise of Modernism in the 20th century, drawing evolved to become its own medium for artists to express themselves. In the University of Massachusetts’s Contemporary Art Museum exhibition Body Language, viewers had the privilege to encounter different expressions of what a drawing could be in the categories of “Looking,” “Touching,” and “Feeling.” These diverse drawings opened the mind to the broad range of materials and functions of drawing. In particular, a drawing by Alan Sonfist titled Earth Mapping of New York City stood out to me among the rest. It appears to be a tracing of pine needles and natural objects found on the ground. I became fascinated with the transformation that took place when this everyday, natural pattern found on the ground was transferred into the context of art. As this interest peaked my curiosity, I started to research how artists have interacted with nature and used it as a primary source for their artworks. By considering Alan Sonfist and the works of other Land artists, I came to the conclusion that nature can be represented as a form of art on its own through the inclusion of pattern and interactive experience.

In the history of art, landscapes have proved the most enduring of artistic inspirations aside from the human figure. Only in this century has the enthusiasm for its depiction lessened due to the the multitude of technological developments that have led to a revival of abstract art. As Jacques Ellul states in his Remarks on Technology and Art:

Technology influences everything and has indeed become the chief determinant not only of man’s habitat but also of his history [….] Today art has two main orientations, the first a direct reflection of the increasing role of technology, the second a sort of explosive reaction against the rigor of technological thinking.¹

I believe a major reaction against technology has defined the movement known as Land Art, also referred to as “Earth art, “Earthworks” or “Environmental Art.” Land Art first gained popularity in the United States in the 1960’s and 70’s in response to the cultural turbulence and social unrest of the late 1960s. In order to really inspire people to feel compelled to conserve nature, a more public approach was needed. Rather than representing nature with paint on canvas or the welding of steel, a handful of artists chose to enter the landscape itself and work with its materials directly. Land Art developed out of conceptual practices in which artists started to make interventions into everyday life. These new earthworks did not depict the landscape so much as engage with it. The first works of this kind were created by Michael Heizer, Robert Smithson, Walter De Maria, Robert Morris, and Alan Sonfist. These works distinguished themselves from other forms of sculpture due to their physical presence within the landscape.² Most of these works are also inextricably bound to their sites, creating a special relationship, which in turn becomes the primary content. However, since Land Art can simply be seen as a presentation of nature, what is it about nature that can be translated into the context of art?

Similar to paintings and drawings, nature provides the viewer with a pattern of similar forms that create a composition. Alan Sonfist’s Earth Mapping of New York City is a charcoal drawing that was completed in 1965. This artwork completely transcends the traditional definitions of drawing in its representation of the trace and the mark. A trace is something inscribed by the artist’s direct physical presence, while a mark is a sign placed with deliberate intention. Earth Mapping of New York City exists as both a trace and a mark. The drawing is a rubbing of pine needles and dirt that suggests the composition of the New York City landscape long before it was inhabited. However upon further examination, the drawing transforms into a landscape with its suggestion of depth, mountains, and even animals or figures in action. The possibility of seeing objects and pictures within this abstracted natural composition is what originally fascinated me in the drawing. If this drawing were still laying flat on the ground where Alan Sonfist traced over the surface, I would most likely just see the overall appearance of marks making up the ground. When this drawing is hung on a gallery wall, however, the bold and active strokes begin to mix with the stain-like shadows and smaller dots to create the illusion of a landscape with possible figures.

The possibility of seeing imagery that is not really there is explained by the concept of “pareidolia”. Pareidolia is “a psychological phenomenon in which the mind responds to a stimulus (an image or a sound) by perceiving a familiar pattern where none exists.” Pareidolia was used as a tool by artists such as Leonardo Da Vinci in the Renaissance and Alexander Cozens in the 18th century, both of whom used stains and natural occurring patterns to make pictures. In Da Vinci’s notebook “Precepts of the Painter,” there is a section included titled “A Way to Stimulate and Arouse the Mind to Various Inventions.” Here, Leonardo Da Vinci states:

If you look at any walls spotted with various stains or with a mixture of different kinds of stones, if you are about to invent some scene you will be able to see in it a resemblance to various different landscapes adorned with mountains, rivers, rocks, trees, plains, wide valleys and various groups of hills. You will also be able to see divers combats and figures in quick movement, and strange expressions of faces, and outlandish costumes, and an infinite number of things which you can then reduce into separate well-conceived forms.

Leonardo understands that this new device for painting may appear “trivial and ludicrous” but is truly a vital tool in arousing the mind to various inventions.

Aside from Leonardo Da Vinci, later artists such as Alexander Cozens and Thomas Gainsborough, another 18th-century English landscape painter, used the effect of pareidolia in nature to invent works of art. Like these artists, I believe that pareidolia can help us understand a pattern and how it makes feel. This understanding can be important in deciding on the types of strokes and marks that you choose to render a scene or capture an emotion. The ability to see different forms and imagery adds an interactive component to nature where viewers can pull out individual perceptions of what lies in front of them, Aside from arousing new inventions for natural compositions, patterns in nature can also be directly translated as they appear. The idea of referencing patterns in nature dates all the way back to biblical times. In Exodus 25, a book in the Old Testament, God gives directions to the prophet Moses on how to build the Ark of the Covenant and the Tabernacle, with the specific instructions to “be sure that you make everything according to the pattern I have shown you here on the mountain.”³ Beyond patterns, this individual, psychological experience viewers gain is what makes nature a truly astonishing work of art.

Continuing with experience, strong pieces of art often evoke an emotion, bring to light a memory, or change the way you perceive something. For example, when I view works by Claude Monet I am always hit with a sense of nostalgia and familiarity with the landscape depicted as if I have been there in a previous life. This action of receiving a feeling and being put into a different emotional state is what I think makes great art. This one of the strenghts of nature over other forms of art. Ralph Waldo Emerson describes this personal experience with nature in his essay titled “Nature.” The Transcendentalist writer brings up the idea that a true understanding of the self can be achieved by going out into nature and leaving behind all preoccupying activities as well as society. Emerson believes that when a man gazes at the stars, he becomes aware of his own separateness from the material world resulting in an uninhibited  way of thinking.⁴ Like Emerson, I believe that nature can serve as an escape from the material world and can provide artists with a space to reflect on the world around them without the influence over others. This effect that nature can bring to the viewer is why Land Art is especially important today. For example, New York City’s famous “Times Square” is essentially a square intersection filled with over 230 billboards and advertisements. The advertising and influence of big corporations are posted all around Manhattan and constantly invade the minds of pedestrians.

Thankfully, a source of nature can be found in a Land Art work in lower Manhattan. In 1965, Alan Sonfist created the environmental public sculpture titled Time Landscape. This sculpture is an area of plants and trees that recreates the natural heritage of Manhattan long before it was filled with skyscrapers and taxis. In Sonfist’s essay “Natural Phenomena as Public Monuments,” the artist explains that with Time Landscape he hopes to create a space for reflection and heightened sensitivity in a “cluttered and overly rationalized modern world” that would ideally stimulate an altered sense of one’s place within the world.⁵ While critics might view Time Landscape as a simple garden or urban forest, the idea of using this natural space as a source for “reflection” transforms the traditional garden into an immersive experience. I believe the experience that Sonfist’s Time Landscape provides is an integral attempt to reconnect humans to nature.

Today we live in society where advertisements, political opinions, and worldly views are constantly being pushed into our mind by force. According to digital marketing experts, it is estimated that most Americans are exposed to around 4,000 to 10,000 advertisements each day.⁶ A study at Oberlin College also revealed that the average American child is able to identify over 1,000 corporate logos but only can recognize about a dozen of the plants or animals found in their neighborhood.⁷ Our society’s loss of connection within nature is creating a population controlled by media and opinions of corporations instead of living out our own personal discoveries and intuitions.

In conclusion, the patterns and personal experiences that viewers achieve when looking at nature justify nature as a direct material of art. While nature can sometimes seem only an aesthetically pleasing source for art, the interactive experience of reflection and individual thought is what pushes nature beyond its concrete existence into the realm of art. More importantly, using nature as a form of art can help compel society to conserve and revitalize our connection with the natural world.