Leon Polk Smith was an abstract artist and geometric painter known for colorful paintings and organic abstraction. He was born in 1906 in Chickasha, Oklahoma to parents who were both part Cherokee Native American[1]. He grew up among American Indians of the Choctaw and Chickasaw tribes and Native American culture was important in his upbringing. Smith discovered that he was an artist while studying English at Oklahoma State College. After that, he worked multiple jobs as an art educator while painting in his free time. In 1944, he moved to New York City, when he received a Solomon R. Guggenheim Foundation fellowship. He starting teaching and making artwork until he was able to make a living full time from selling his artwork. He is known for creating colorful abstract paintings featuring simple shapes and designs. 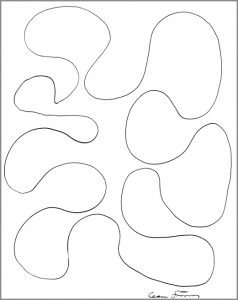 Smith created an Untitled drawing in the 1950s that is currently in the University of Massachusetts University Museum of Contemporary Art collection. Smith was interested in the way space becomes distorted and multidimensional among forms, without using any traditional means of accomplishing this, such as perspective and shading. Comparing Leon Polk Smith’s “Untitled” drawing from the UMCA to a drawing by Henri Matisse at the Smith College Art Museum, Woman’s Head from 1947 reveals similar intentions with diverse results. I argue that through the greater expressive freedom of his abstract forms, Smith achieves the very spontaneity and effortlessness in his drawing that Matisse aspired to but never fully achieved, since he remained attached to representation in the form of eroticized female bodies. 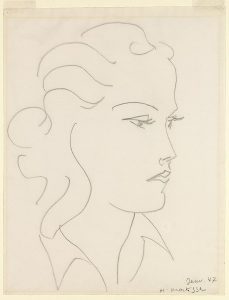 In 1954, Smith’s allusions of curvature became curved lines. Smith was looking at a sporting goods catalogue where he saw illustrations drawn with pencil rather than photographic illustrations.[2] The seams on the footballs and basketballs intrigued him. The images showed him how to use the curvilinear form with an inner circle. Then he did a series of paintings on the circle before he carried the design to a rectangular format. After doing a number of similar drawings he started creating his own shapes.

Untitled is made up of one graphite line that loops back and forth from the middle of the paper to the side, then comes around clockwise to reconnect at the point where the line started. He drew the line in one continuous motion without stopping or picking up his pencil from the paper. You can see the point where Smith put down the pencil and where he lifted it because a small white space is visible between the two points. You can trace his motion in one fluid path because there are no breaks in the line, and the line maintains the same weight throughout. The imperfect freedom of the line makes the viewer feel the hand of the artist, and it conveys a feeling of openness and accessibility. It is important that the distinction between form and space is blurred. Matisse describes the possibilities of creating interest through the weight of the line and the space of the paper in an interview from 1941: “In spite of the shadows or half-tones expressed by hatching, I do not renounce the play of values or modulations. I modulate with variations in the weight of line, and above all with the areas it delimits on the white paper.”[3] Because the Smith drawing doesn’t have color to distinguish between shapes, it’s hard to tell if the loops are describing the border of a middle form or an outer entity that is moving inward to engulf the space. However, since there is a break in the line, it’s not an enclosed form, which makes the drawing a line on paper rather than a shape. 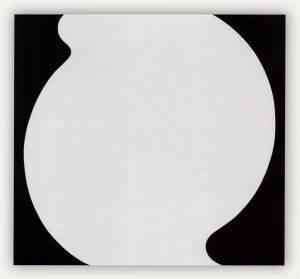 Untitled is uncharacteristically colorless. I think that Smith was experimenting with the very loose, rounded shapes which he would move on to include in his paintings. You can see the spontaneous motion of his gesture that shows him experimenting with this type of movement. The drawing at the UMCA shows Smith’s progression from rectangles, straight lines, and implied diagonals to free form shapes in works like the paintings Expanse, 1959, and Stretch of Black III, 1961. Expanse suggests endless possibility where its curves curve back on themselves, just before reaching the edge of the canvas and vanishing. 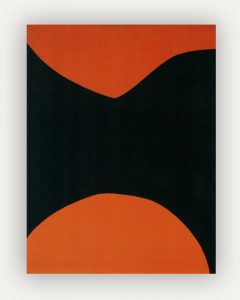 The forms in Stretch of Black III seem to be derived from similar shapes as Unitled. He abstracts the image so that just part of two points of the sensuous form are shown. The same loops that make up the drawing are abstracted and enlarged so that only the tip of the loops make their way onto the canvas. It’s as if the painting shows the space between two loops if you zoomed in, cropped, and enlarged. There are only two lines, but he creates three shapes by the way he colors the image.

Space becomes distorted and multidimensional and you can sense the play between images in Smith’s work. In his paintings, the fine line acts as a pleasingly disturbing element of aesthetic contrast. He describes the way he uses line to create multiple dimensions: “Then by simplest of means this is to create the greatest amount of space, moving in all directions. Space being activated and disturbed in this manner becomes multidimensional.”[4]

Henri Matisse’s Woman’s Head is a free-flowing three-quarter profile of a young woman. The confident pencil lines describe the contours of her hair, jawbone, and collar. She sits with her head turned away from the viewer, with slightly pursed lips. Her apparently flawless skin and stylish hair make her conform to the expectations of beauty at the time, putting us in the position of a male observer, if not admirer. The picture actively evokes the traditional male gaze. She is looking away, allowing us to appreciate the beauty of her features, which is almost exaggerated in its suggestion of flawless purity.

Smith is known for painting with combinations of pure colors – pure color coming up to another pure color in very large areas. Color was important to Smith because it broke the images up into forms. The Untitled drawing at the UMCA is absent of color. He observes:

As to color, the traditional use of somber color was never a part of my environment. I grew up in the Southwest where the colors in nature were pure and rampant and where my Indian neighbors and relatives used color to vibrate and shock in all its intensity with equal rampancy.[5]

The abstract artist used severe pure colors to energize his works with vitality and power, which tells the viewer a little bit about his personal experience and identity as well. With the absence of color, we only have line and form, and have to imagine the distinction between spaces. Matisse was interested in evoking color and light by varying the weight of line in his drawings, but in Smith’s abstract drawing, the mark is same width throughout so there a more even distribution of light across the surface.

Matisse describes in his interviews his awareness of the different means of expression in color and drawing. He studied the old masters and assimilated their techniques into his own observation of nature. Then Matisse decided to forget the methods of the old masters, or comprehend them in a completely personal manner. The absorption of master’s techniques and then doing away with them is what makes Smith and Matisse similar. In the same way that Smith worked out of Mondrian and altered what could be said about space and ground with his intuitive process, Matisse used his intuition to capture the essence of things with as few marks as possible.

Both Matisse and Smith evoke a huge amount of movement and space with very few lines. Smith plays with the viewer’s concept of space without recognizable imagery whereas Matisse also plays with space but with the charged content of the female figure. Matisse provides the viewer with feeling, but also raises your curiosity about the woman’s character and other personal qualities that distract you from the pure essence of the expressive line. Matisse evokes light values in the crispness of the line against the white paper. On the women’s upper lip, forehead, and chin you can see light cast off these lines to help portray how she looks. The looping lines for her hair resemble the abstract loops in Smith’s drawing. While both artists set out to capture the essence of feeling, Smith accomplishes it more directly because the stimulus is in the emotion of the line only; the image is not recognizable.

Each artist grapples with the problem of how to express feeling with pencil on white paper. Leon Polk Smith stays true to the history of pure abstraction carried on from Mondrian, where Matisse remains tied to the traditional content of the female figure. Smith’s drawing in the UMCA has an all-encompassing single line that captures an indescribable but liberating feeling in the viewer. The primary aspect of Matisse’s work is the beauty of the female figure, which subjects the viewer to gendered attitudes that may limit their experience of the drawing.