Why feeling?[1] Aren’t we feeling too much lately? We appear to be living in an era when feeling trumps rational thought. The White House operates on a perpetual Twitter-feed of wounded outrage and irrationally labels all forms of critical journalism “fake news.” Voters make choices out of fear, as well as righteous anger at being excluded, but with calamitous disregard for the logical consequences of voting as an act of rebellion. If there ever was an “age of reason” it is now definitively over. The scientific method is under attack and rational thought is drowning in Twitter feeds. With the echo chamber of social media and personalized news, everyone hears their own thoughts and feelings magnified, but without listening to each other. To take the old AT&T line, we reach out and touch each other all the time—but we’re not feeling each other. In the 1990s people used to say, “I feel you” (you gotta put your hand on your heart and lean into it here) meaning, “I understand, I get it.” What I’m really calling for here is co-feeling, you know, compassion. So when I say feeling, I’m talking about compassion, feeling for others. I’m talking about listening, which means assuming that I do NOT have all the answers, but that I can only arrive at new ones together with others. I’m talking about a mind in which thought and feeling are both taken seriously as human motivations, but an open mind, where the unknown is invited in. You have to be careful, though, because you might learn something. 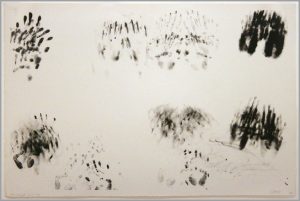 In 1973, Robert Morris began making what he called “Blind Time Drawings.” He was trying to invent a new form of drawing that was neither “straightforward representation on the one hand” or “non-representational, on the other.”[2] He closed his eyes, or sometimes used a blindfold, and tried to accomplish some banal task, like: “move outward from the center making counting strokes” or “attempt to plot the entire visual field.” With his hands covered in powdered graphite mixed with oil or ink, he attempted to complete the task in an amount of time he estimated in advance, recording on the final drawing his own margin of error. A print related to the series was on view this Spring in the exhibition called “Body Language” curated by my students, in the University Museum of Contemporary Art at UMASS in 2017. These drawings speak to me, in ways I’m still trying to understand. The process of these anonymous hands feeling on paper, as if reaching out to touch us, seems incredibly profound. To me these drawings convey the importance of feeling in addition to sight. They recognize emotion as equal to knowledge. They also suggest the significance of unknowing, in that our culture links sight to knowing.

Many scholars, like Jacques Derrida, have written about the significance of blindness in relation to drawing, in that the moment the artist touches pencil to paper they look down, instead of out at the object in the world, and thus become at that moment blind.[3] Drawing forces us to recognize the failure of mark-making (or any signification) to adequately capture the other, or the world. Morris’s amplification of touch in the space of vision is a profound act of refusal of mastery. Seeing is also believing, and for an artist to inhabit blindness suggests skepticism, and unlearning. Morris’s page opens to the unknown, and therefore to the voices of others. I read these hand prints as both self and other at once. I could have made these anonymous marks, but at the same time they suggest the presence of other people, strangers. The experience of blindness often amplifies not just feeling but hearing, and thus empowers listening. Feeling and listening. Tuning out spectacles and distractions to get at what is underneath the visible world.

The drawings are incredibly humbling, acknowledging that we are all in some way feeling in the dark. We live in a society that is divided radically and incessantly into categories of left and right, and these continually devolve into us and them. We need to listen, less to our friends than to them—those people we can’t figure out. We need to hear them, but with humility and above all, with compassion. We need to “feel” them. We need to feel, better.

[1] This talk, inspired by the student-curated exhibition Body Language produced for the Spring 2017 seminar “Drawing Connections,” was given at the Teaching and Visuality Seminar organized by Hampshire College at the Eric Carle Museum, March 24, 2017.

[3] Jacques Derrida, Memoirs of the Blind: The Self-Portrait and Other Ruins (Chicago : University of Chicago Press, 1993).