This PDF was originally a PowerPoint I made for presentation night with my friends.  As such, some of the slides might not make sense, but the overall information is pretty good (in my opinion, of course) for anyone looking into our campus history.

A good logo is the foundation of any successful brand.

UMass has a turbulent history with logos.  Before ~1998, UMass didn’t even have a unified logo, instead relying on the university seal and random concoctions dreamt up by faculty.  Around the turn of the millennium, UMass embarked on a wonderful campaign to create a logo emblematic of the university; here are two great articles on the subject:

21st-century readers may notice that the logo created by the campaign looks oddly familiar… just not from the Amherst perspective.

In fact, the logo created by the campaign was so successful that every single other campus in the UMass system (Boston, Dartmouth, Lowell, Medical School), is, as of 2019, still using their altered version of the original logo intended for use at the Amherst campus.

You’ll notice in the caption above that despite this widespread popularity, its reign barely lasted 4 years, until 2002.  I have no source to confirm this (edit: found a source), but it’s my belief that the decision to drop the logo was made primarily as a result of the other UMass campuses adopting versions for their own use.  Again, I’m speculating, but I believe the dilution of the 1998 logo caused confusion regarding which UMass was the UMass; especially considering that Dartmouth and Lowell had only become UMass affiliated 7 years earlier, in ’91.

2002 began a long string of loosely related wordmarks representing the university; primarily differentiated by typography, this family of logos stretches to current day.  All of these iterations were found on the Internet Archive of umass.edu, here are some highlights:

For the sake of space, I left out versions differentiated by small changes within a short time period.

Even omitting the smaller changes, the above timeline exemplifies 4 different approaches to the logo in a 15-year timespan.  While they are all clearly related, the end result is inconsistency and confusion among faculty when creating branded materials.  In my dorm, on my floor alone, all of these logo variations can be found somewhere.  Especially at overly bureaucratic UMass, this illustrates the necessity of keeping a logo steady.  Refreshing a webpage every few years to stay competitive is important; changing the logo frequently leads to unwanted side effects.

Regardless, inconsistency is a minor annoyance compared to the real issue at hand: These logos don’t convey what they’re supposed to.  I’m going to highlight the fact that the 15-17 logo was subtitled “The Commonwealth’s Flagship Campus” to illustrate my point.

A good logo should not require a caption for people to understand it.  UMass knows this, because they replaced that logo with the current logo, getting rid of the tagline.  The current website’s “longform” logo is an improvement from a message standpoint, although the three lines of text are overwhelming and far from an ideal logo.

As of the most recent change, the previous logo (without the tagline) is still the university’s official wordmark.  The “UMassAmherst” logo is the dominant logo on campus and on university webpages.  It’s adequate, although a few minor things stick out.  The word “Amherst” is bigger than the word “UMass”, which is problematic for obvious reasons.  This issue is aggravated by the world-class liberal arts college down the street, Amherst College, which uses “Amherst” in a similar serif font as it’s own logo (I have personally witnessed the two institutions being confused with one another).

So what’s the problem?  UMass needs a consistent logo that effectively and clearly conveys what it is, without confusion.  What is UMass?  It’s the best public university in Massachusetts, the US’s education state.  A 156-year-old institution ranked as the best public university in the world for linguistics, among other highly ranked programs.  It has amazing student life, #1 campus dining, and offers the opportunity of a highest-quality flagship education at a great value for MA residents.

In MA high schools, UMass is stereotyped as “the safety school”, often by guidance counselors more than students nowadays.  My personal experience is that because UMass was so widely known this way, the contrived reputation shunned potential students (including myself) from seeing it for what it really is.  A fresh logo that communicates the right message about UMass could be the building block upon which a new identity is formed.

Right off the bat, I noticed how a lot of universities had symbols representing the college as part of their logo.  The abstracted Rotunda and the spherical Maryland “flag” are two of my favorites.  State names are prominent, town names relegated to either small text or left out altogether.  UConn, in a similar situation to UMass in terms of state name length, puts the abbreviation front and center with the full name off to the side.

I looked at more than this but I came to a few general conclusions.  Serif fonts seem to be pretty well standardized, with a few exceptions like UConn unifying their academic and athletic logos.  Good logos are mostly rectangular, wider than they are tall, and often feature something other than text.

When I started out to design a logo for UMass, I had a vision in my head for what I wanted it to look like.  Many buildings on campus have the Massachusetts state seal right above the main entrance, so that was my starting point.  The university seal is a variation on the state seal in PMS 202 UMass Maroon.

The current state seal depicts a Native American holding a bow and an arrow pointed down, with an arm holding a sword above.  Recent political movements have opened a dialogue about the original intentions of the seal, which was adopted in 1885.  Some have argued that the seal and motto interpreted together are a racist reference to a growing Massachusetts’ bloody subjugation of Native populations.  Considering that, I decided to redesign the main pictorial element of the seal, moving the star to the middle and working with an abstraction of the symbols, like the bow and arrow.  While the shield in the middle could work by itself as in the UT-Austin logo, I chose to keep the seal’s “ring” intact for the “Amherst” designation.

The current logo has been typeset in Adobe Minion Pro since 2013.  A beautiful serif font, it also has the advantage of being included with Photoshop’s font package.  These two factors led me to keep Minion Pro for the wordmark.  Keeping the font the same would ease the transition, making sure the old logo doesn’t instantly look obsolete as it slowly gets phased out, while also building on the UMass brand equity tied with MP since 2013.

I dropped “Amherst” from the wordmark entirely, moving the maroon color onto “Mass” instead.  I slightly thickened the U and M characters in the wordmark for emphasis as well.

The result is a logo which I would describe as “quintessentially UMass”.  The font keeps it familiar, and the black U stands out from the maroon enough to emphasize the logo’s place at a university.  Making the one word “UMass” two different colors has the secondary effect of emphasizing the two words they represent in the official name, “University of Massachusetts”.  Finally, the seal stands proudly preceding the wordmark, giving the logo an air of certainty and determination.

While the above logo would be intended as the primary logo for the university, alternate versions have to exist as well, so I mocked up what something like a more official, long-form wordmark might look like on the current university website: 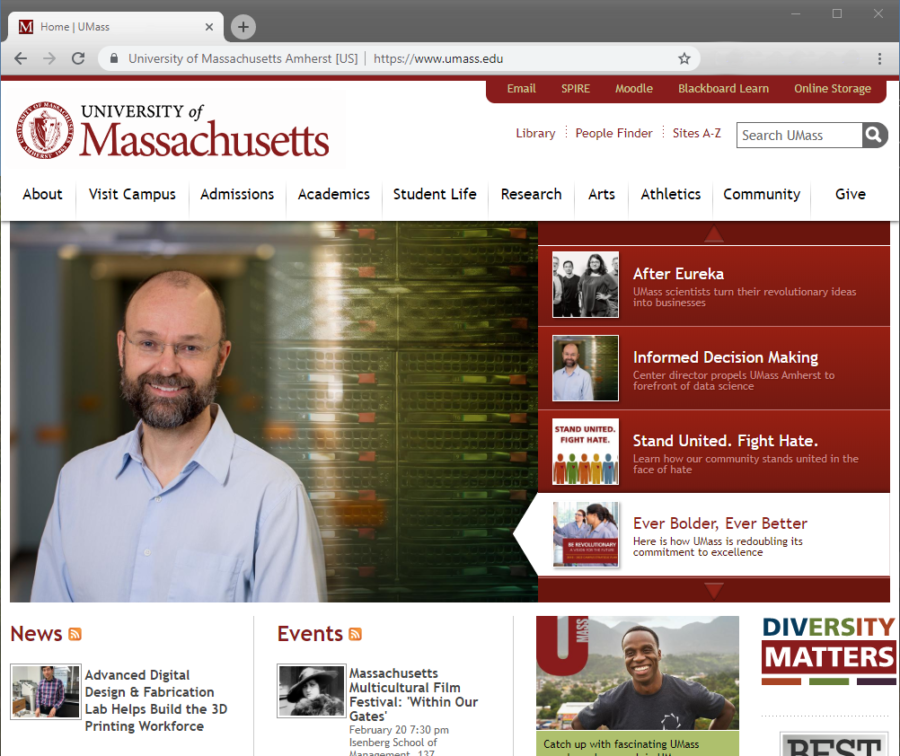 The resulting wordmark is much more compact than the current version, yet looks more appealing and conveys a stronger, more confident message to the visitor.

And of course good logos must work on backgrounds other than pure white so I mocked up some alternate backgrounds and logo configurations:

The inherent simplicity of the logo means it works great in monochrome or on any kind of solid background.  Less text means that text can be bigger and better defined, enabling nice modern effects like the slight transparency above over particularly interesting backgrounds.