For anyone interested in attempting to generate biogas (methane) as a class demonstration or student project, I’ve attached a powerpoint (Biofuels teaching energy in life science) developed for my sustainable energy course, which I also used to present at a town fair when I taught in Vermont. The organic waste remains contained, so odors were not a problem.  Also, no known pathogens can grow in the anaerobic environment of the sealed digester, so health risks are quite low.  Use proper precautions as one would in any lab environment (gloves, lab apron, safety glasses) when loading and unloading the digester.  In fact, this technology is used on farms, with one of many benefits being the treated fibrous waste can be used as bedding for farm animals.  Studies have demonstrated that this type of livestock bedding actually reduces infections among the livestock, compared to the use of sand or sawdust as is typical.  Pretty amazing!

The very last slide shows a pic of the design I had the most success with.  I’ll insert it here for convenience: 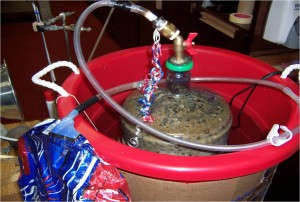 I used a 5gal Poland spring water bottle.  Only drawback is its difficult to fill and even more so to empty. (A food grade 5 gallon bucket with lid might be an improvement.)  I used goat droppings as my source of methanogenic bacteria because the goat pellets can pass through a large funnel during filling.  I also added quick oats as a source of carbon and nitrogen to feed the microbes (you want a high C/N ratio, which is why human waste streams in the USA can pose problems, as we Americans eat a lot of protein).  Ideally the system should be stirred constantly, but I had success by shaking the bottle three time/day.  A Mylar balloon is impermeable to the CO2/CH4 gas mixture so its ideal as a gas collection vessel.  Rather than attach the filled balloon to a bunsen burner, I would attach the balloon via tygon tubing to a glass pasteur pipette.  Its small opening would allow for a small, pencil tipped size flame, so one full ballon would last all day to demonstrate to all my classes.

These simple, desktop scale classroom systems generally do fail after a few days as the pH  drops below 7.  This is because acid producing bacteria grow much more rapidly than the methanogens.  Ironically acetic acid is the “preferred food” of most methanogenic bacteria, but they are also very sensitive to pH.  So as their food supply becomes overabundant, pH drops, and the population collapses.

This is why its best to start with a lot of manure and relatively less oatmeal.  Thus encouraging a large population of methanogens relative to the acid producing bacteria.  Also, larger volume bioreactors are generally more stable over time than smaller reactors.  I have not had very good luck with buckets smaller than 5 gallons.

A big water bath heated with an aquarium heater works to maintain the constant ~98F temp for “mesophyllic” methanogenic bacteria (the type that live in the gut of a cow, horse, or goat.   However, thermophyllic (higher temp) digesters have been used successfully to treat hospital waste, with the added benefit that the higher temperatures not only drastically reduces the total amount of biomass needed for eventual disposal, but is even more effective at sanitizing the final waste product.  The mesophyllic digesters are more commonly used due to lower cost (less energy needed to maintain mesophyllic temperatures), for sewage treatment (example: Deer Island, Boston) and livestock operations.  Its still a very much underutilized technology hear in the USA.