A couple of months back, I wrote about my jump to a Windows Phone. I haven’t regretted that jump, nor have I been lured away by the wiles of the sleek iPhone or the omnipresent Android. Outside of the occasional frustration with the lack of an app here or there, and the inability to connect to the campus eduroam (I can still connect to the regular UMass network perfectly fine), my experience with using a Windows Phone has been great. But even as I started my journey with a Windows Phone only half a year ago, the platform is already evolving in a big way.

During the development of Windows 10, Microsoft has had a new ideal in mind: The unification of its desktop/laptop, tablet, and mobile systems into a single operating system, able to morph between the three architectures with ease. Although Microsoft’s biggest share in these three architectures lies in the desktop/laptop market, it hopes that the unified system will draw people to the Windows versions of the tablet and mobile architectures. Convenience is the key for Microsoft, the hope that people will decide, “Hey, I use a laptop with Windows 10, and a Surface Pro with Windows 10, maybe I should get a Windows Phone to sync everything together?” This is where Windows Phone’s next advancement comes into play. While the desktop version of Windows 10 has been in development, so has the mobile version, in order to truly make this goal of a unified and cohesive operating system come to life. And that brings me to why I’m writing this article. We’ve tested and talked about the Windows 10 desktop preview builds, but not yet about the mobile preview builds. Without further ado, let’s get started on my exploration of the next evolution of Windows Phone, Windows 10 Mobile, or at least the latest preview build, which at the time of this article is build 10149.

Let’s start off with a warning. Testing preview builds on a phone is always risky, because of the fact that unlike testing them out on a desktop, sometimes issues can arise which can lead to your phone being unable to call or text, or in the worst case, being completely bricked. Unfortunately for me, the combination of not having a secondary phone to test preview builds on, and an unrelenting curiosity, led me to install the latest build on my main phone. The installation process was simple enough, I just had to install the Windows Insider app and let it download and install the latest Windows 10 mobile preview build. After the phone restarted, I watched the animated gears turn away for what seemed like an eternity, but in reality maybe a half an hour. Eventually however, everything finished and I saw Windows 10 Mobile for the first time. Let’s dive into what I saw, and what my experience was like.

I haven’t tested out the earlier preview builds of Windows 10 Mobile, but from the reviews I had read, they weren’t exactly the most stable. Some of them had rare, but phone-breaking bugs that would scare away regular beta testers due to the risk you’d be taking by installing the build on your phone. Bugs were galore, crashes happened everywhere, and sometimes you were barely able to even install the build! This build however, it seems things have gotten a lot better. Right after I first installed the build, I made sure to reset my phone so that I wouldn’t have any lingering issues due to upgrading from 8.1, and it’d pretty much be a fresh installation (similar to how you’d reinstall a desktop preview build from an ISO to have a clean, fresh start). I’m happy to say that in my couple of days of using it so far, I haven’t run into any major issues. Unlike some previous builds, there haven’t been any unexpected total phone crashes or restarts. Apps generally run pretty smoothly, although there are places where errors will popup, or areas are unfinished (that’s to be expected of a preview build anyways). This build also runs quite fast in most places, and in some ways, it seems even faster than the old Windows Phone 8.1. Overall, I would definitely say that the stability of this build is quite good, and outside of the occasional crash of an app, things are looking very good!

I’ll be honest about this; It’s generally been quite atrocious. The phone that would normally last over a day on a single charge now lasts a couple of hours at max. Digging into this issue a bit has led me to believe that it might be caused by the beta Store app, so clearly this is something that needs to get worked on for the future. As a side note, I will add that I’ve been running the phone today after restarting it, and the battery usages appears normal (I haven’t opened up the beta Store app at all).

Although many in the Windows Phone community have argued that the changes to appearance are getting rid of some of Windows Phone’s stylistic identity (like the three dot pivot style), and replacing them with visuals you’d see on more popular operating systems (like the hamburger menu), I think that so far, the changes have been quite good. The new animations are generally quite fluid, and the overall operating system, in my opinion, looks sleeker than 8.1. The only big gripe I have with the appearance at the moment –which is actually a bug– is that the bottom bar of apps, which should normally have the same accent color as the rest of the phone, has a completely different color.

I will let you judge for yourself how it looks from some of these screenshots below: 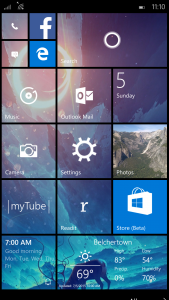 My current start screen in this preview build. 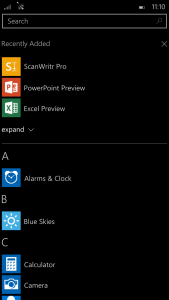 The new and improved “All Apps” page! 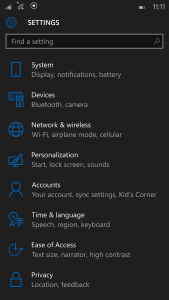 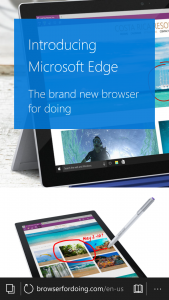 A glance at the new Microsoft browser, Edge!

This preview build also comes with several revamped apps from Windows Phone 8.1. The most notable of changes, and one that carries over to the desktop builds as well, is the introduction of Microsoft Edge. Project Spartan is officially dead, and from its ashes has arisen Edge. For those who haven’t been keeping up to date with some of the changes occurring in the preview builds, both mobile and desktop, Microsoft has ditched Internet Explorer and created an entirely new web browser to better embrace modern web standards and compete with the likes of Google Chrome and Firefox. The desktop version of Edge is already quite good, but what about the mobile version? Well, I’m happy to say that it is also shaping up nicely. There are still issues with some websites not rendering correctly, and there are a couple of annoying visual glitches in the browser itself, but overall, it looks and functions quite well. The next most notable app change comes with the new Music app. If you’ve ever used the default Xbox Music app on Windows Phone 8.1, you know it’s not the best. It doesn’t offer many features, doesn’t look that great, the live tile is an ugly green color, among other things. The new Music app is a world of difference. There is a hamburger menu, yes, but the entire app just looks and feels so much better to use. I personally love using this app to browse and listen to music. However this isn’t the only app that’s been redesigned for the better. The Calendar app has also been improved to look much more sleek and streamlined. I also have to add that all of these apps carry a unified visual style, so when you’re switching between them, it doesn’t feel like you truly are, which is pretty cool. As great as they look however, they still can feel sluggish sometimes on my Lumia 930, which is currently one of the higher end spec’d Windows Phones. The beta Store app especially needs work; there are apps that give errors while attempting to update through it, and it causes a massive drain on battery life when using it. Overall, I definitely like the direction they’ve taken the apps, and I’m not as attached to the old pivot menu as other people to disagree too much with the direction.

My experience with this preview build has been pretty good overall. There are still a few issues with battery drain with some apps, the occasional crash of an app here and there, and a couple of visual glitches. Beyond those problems however, I think that the direction that Windows Mobile 10 is going is a good one. It has a nice blend of the traditional identity of Windows Phone with the more popular stylistic choices adopted on other phones. Oh, and let me emphasize again to Microsoft that eduroam still doesn’t work on Windows Phones.