By now, we’ve all seen or heard stories about a recent scare in Hawai’i where residents were bombarded (ironically) with an emergency notification warning of a ballistic missile heading towards the isolated island state. Within seconds, the people of Hawai’i panicked, contacting their families, friends, loved ones, and stopping everything that they were doing in their final minutes of their lives.

Of course, this warning turned out to be false. The chaos that ensued in Hawai’i was the result of an accidental warning fired off by a government employee of the Emergency Management Agency. Not only did this employee send off a massive wave of crisis alert notifications to Hawaiians everywhere. In some cases, it took up to 30+ minutes to signal to people that this was a false flag warning. With the rising tensions between the United States and the trigger-happy North Korea, you could imagine that this could be problematic, to put it simply.

The recent mishap in Hawai’i opens up a conversation about Phone notifications when responding to crisis situations. While Hawaiians, and more broadly Americans, aren’t used to seeing this type of notification appear on their lock screen, this is a common and very effective tool in the middle east, where Israel uses push notifications to warn of nearby short range missiles coming in from Syria and the Gaza Strip/West Bank. 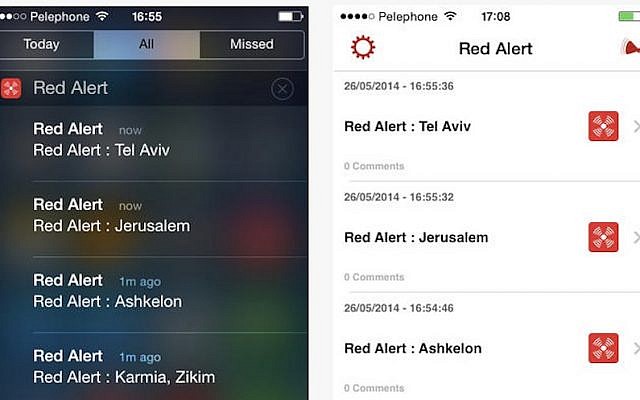 In a region full hostilities and tense situations, with possible threats from all angles, Israel keeps its land and citizens safe using a very effective system of Red Alert, an element of Israel’s Iron Dome. According to Raytheon, a partner in developing this system, the Iron Dome “works to detect, assess and intercept incoming rockets, artillery and mortars. Raytheon teams with Rafael on the production of Iron Dome’s Tamir interceptor missiles, which strike down incoming threats launched from ranges of 4-70 km.” With this system comes the Red Alert, which notifies Israelis in highly populated areas of incoming attacks, in case the system couldn’t stop the missile in time. Since implementation in 2011 and with more people receiving warnings due to growing cell phone use, Israelis have been kept safe and are notified promptly, leading to a 90% success rate of the system and keeping civilian injuries/casualties at very low levels.

If this Hawaiian missile alert was true, this could have saved many lives. In an instant, everyone was notified and people took their own precautions to be aware of the situation at hand. This crucial muff in the alert system can be worked on in the future, leading to faster, more effective approaches to missile detection, protection, and warnings, saving lives in the process.

In an era of constant complaint about the ubiquity of cell phone use, some of the most positive implications of our connected world have been obscured. Think back to 1940: London bombing raids were almost surprises, with very late warnings and signals that resulted in the destruction of London and many casualties. With more advanced weapons, agencies are designing even more advanced defense notification systems, making sure to reach every possible victim as fast as possible. In an age where just about everyone has a cell phone, saving lives has never been easier.

For more reading, check out these articles on Washington Post and Raytheon: