With the advent of smart technology, the relative ease with which we access information is changing. The smart watch puts much of what a person does on their phone, on their wrist, and on the internet. While we make these technological advances, some things remain constant, like professional sports. With the exception of some minor rule changes here and there, many of the most-watched games in the U.S. have remained the same. Recently, The Red Sox allegedly used smart watches to steal signs from The Yankees, which raises an important question: should smart watches be allowed in professional sports?

Most smart watches have the common ability to monitor the wearer’s heart rate. This data could be useful in monitoring players condition so the coach knows when to make substitutions, but it could also be used for medical research. If every professional athlete wore a smart device while they played in games and did workouts, the amount of data that could be made available to medical professionals in one year would be astounding. This data could lead to a better understanding than we have now of the human body at work.

While wearing smart watches in professional sports hold potential societal gain, the reality of the situation is not as optimistic. Many sports involve physical contact, which leads to a risk of either the smartwatch breaking, or increased injury due to contact with a smart watch on a player’s wrist. There is also an increased risk of cheating if players and coaches can view text messages on their wrist.

In my opinion, sports would be better off without smart technology becoming part of any game. The beauty of sporting matches is that they are meant to display the raw athletic abilities of players in competition. Adding smart technology to the game could lead to records that have asterisks by them, similar to home run records set by players who used steroids.

If you’ve ever wondered what the geekiest gadget is to own you may get a few different responses. Maybe its a drone, maybe its a ringtone that is an anime intro song, but for a lot of tech nerds it was the Pebble watch.

Why do gadget heads love it so much? Well, Back in 2012 Pebble did a kickstarter campaign to fund the would-be watch company. It ended up being the most funded kickstarter ever. And geeks love a good kickstarter story. It’s the nerd version of David vs. Goliath.

But we also loved the technology behind it. Pebble watches were always water resistant. The battery life was about a week. The display is a e-paper display, and tech savvy people love discussing how much they love e-paper displays. Looking at the first generation apple watch, pebble had more battery life (7x more, actually), it had swimming support, and it did it all years before anyone else did. 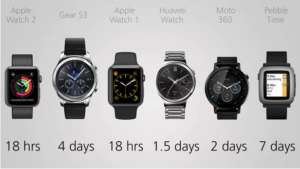 By far, pebble watches have the most battery life compared to other popular watches 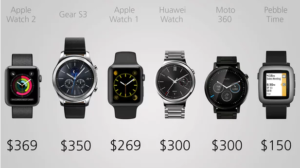 Pebble’s starting price is half of the next best watch AND has more battery life and swimming support. 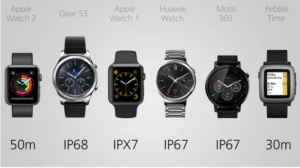 Pebble and the Apple Watch 2 are the only watches on this list with swimming support. Remember that this is the basic pebble time watch. The pebble time 2 + heart rate has even more athletic support

Pebble was the under dog that never stopped impressing.

It’s app store had 1000 applications. That’s a ton for the little smart watch that could. You could attach the time piece to your bike and it would track your speed. The pebble watch 2 with heart rate could track your sleep schedule and calories (full disclosure, I bought one of these yesterday and am currently waiting for it to come via snail mail). It vibrates when you get a text or email; and unlike the latest and greatest Fitbit Charge 2, you can respond to text messages from the watch! All while maintaining incredible battery life.

Back in 2016, pebble was bought out by fitbit. A worthy adversary. And for a company that was primarily funded via kickstarter, it was an entrepreneurs’ dream. This means that pebble is selling off all of their inventory, so get yourself a pebble watch before they go away forever. Then you too can have the geekiest gadget around.