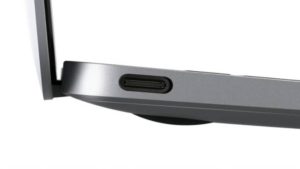 In 2015, we saw Apple relaunch what was the complete overhaul of their former flagship laptop line before making the switch to the Pro/Air series. The new Macbook, which included many new features that were relatively brand new to the laptop world, hit the shelves with its new Intel Atom processor, butterfly keyboard, and beautiful Retina display. This product was praised for its innovation in many areas, but what took the technological world by storm wasn’t any of those features, the display, or even debuting in 3 different finishes. Yes, the big discussion were its ports, or lack thereof.

This Macbook featured a single port, a USB type C port, opposite of the 3.5mm headphone jack on the other side of the computer. This notebook, the smallest and thinnest among its family in the Macbook line, left any other port besides these two off of the case and into the world of adapters. While many were left scratching their heads, Apple was not only selling many of these devices but also was praised for product innovation and debuting the next new type of USB to its devices.

Fast forward to Fall of 2016. Apple’s newest line of Macbook Pro’s are just announced, featured, and released. Amidst the new keyboard previously seen by the lower level Macbook and even the Touch ID touch bar sitting atop the keyboard, again the question brought up is this: What about it’s ports? 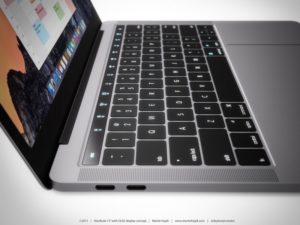 Now that Apple has brought the USB type C port to its higher end of Laptops (all of the Macbook Pro line), what can we expect from future devices? Will Apple learn from the likes of Google and Motorola and integrate the newest port to its iPhone and iPad (and iPod?) lines?

What’s next in line for an overhaul among Apple’s core devices is in fact the Macbook Air. Praised as the perfect everyday computer, it really isn’t needed for heavy usage and professional applications, but it is perfect for the average user and student for its longevity on the battery side of things and ease of use and efficiency fit into a small form factor. Featured already are its Magsafe 2 charging port, two USB 3.0 ports and a headphone jack.

We have already seen Magsafe 2, which was the hyped-up successor to the original charging port of the older Macbook Pros/Airs in the Magsafe 1 port, is now phased out on two of three Macbook lines. What is due up next is removing this port on the Air. This would be paving the way for the Air to upgrade to the next level of innovation and include a Type-C port for charging, fitting right in with its brothers in the line-up. While introducing this next port for charging, it is also lightning fast for data, so remove the other USB ports and you got yourself a Macbook Air, with multiple Type C ports and a headphone jack, along with the improvements in display and keyboard that should come with it.

But what does this mean? Is the adapter life going to consume us for the rest of time? That answer we do not know yet, but it is worth thinking about. For Apple and many companies that should follow suit, this is a huge market to breach in customers purchasing different dongles and adapters to hang like winding branches off their laptops. For the likes of HDMI, Thunderbolt, Ethernet, and many other ports very much still necessary in this day and age, will companies phase them out and stick to adapters forever, or will Apple learn from the adapter game and start to integrate these ports back into their devices, using these next models as sort of a “testing phase”?

For now, we’ll see where this brings us for the product releases in the spring and fall of 2017, but something to know is this: USB Type C among Apple devices is here to stay, and there’s no getting around it. Maybe we will see this dominate every device from the iPhone, iPad, Macbooks, and even maybe into desktop computers.