Whether it’s veterans, amputees, or those born with certain abnormalities, prosthetics have allowed millions to live ordinary lives and do things they never thought possible. The idea of prosthetics is not a new one however. Ever since Greek and Roman times in the B.C era, doctors were attaching wooden stumps to those without legs, arms, toes, etc. However, the technology behind prosthetics has only picked up in the recent 20th and 21st centuries.

But how does it work? When I think of moving my arms or my legs, I am physically able to do so. But what if I had a prosthetic? How in the world do I make this limb-shaped computer actually do stuff? Well the answer is quite impressive actually. This is definitely one of those medical practices that just makes me go “wait, we can do that?”

If you are a healthy individual, you are able to move your limbs due to electrical signals that your brain is sending through nerves towards your muscles. Your muscles receive this electrical signal and either contract or relax. But if I were to amputate, let’s say, everything below your right knee, where would that electrical signal go? The signal would still go along the nerve towards your lower leg, but it would hit a dead end and there would be no response or outcome. In order to make your newly attached prosthetic usable, some rewiring needs to be done inside the body. 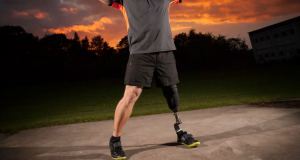 Doctors are able to perform what is called targeted muscle reinnervation – in this process, doctors redirect those electrical signals to another muscle in the body; the chest for example. Now, the nerves that once controlled your lower leg, would now contract your chest muscles. You’re probably thinking, how does contracting my chest help the fact that I’m missing part of my leg. This is valuable, because the electrical activity of these chest muscles can be sensed with electrodes and used to provide control signals to a prosthetic limb. The end result is that just by thinking of moving your amputated leg, you cause the prosthetic leg to move instead.

Even outside of the biological aspect of prosthetics, they are truly feats of engineering. Since no two human bodies are physically exactly the same, all prosthetics need to be specifically designed to each patient. A wide variety of materials are used to create the actual limb, including acrylic resin, carbon fiber, thermoplastics, silicone, aluminum, and titanium. To create a life-like appearance, a foam cover can be applied and shaped to match the real limb. A flexible skin-like covering will be applied over the foam to give it the life-like appearance.

Prosthetics have given millions the opportunity to live a normal life and the technologies behind prosthetics is only getting better. Newer technologies allow people to move their prosthetic limbs without having any invasive surgeries or neural rewiring. The future is here, let’s just make sure we don’t all turn into robots.