With the recent explosion of virtual reality in the tech world, many scientists are somewhat worried about the possible effects of long term VR use. While there are many potential benefits of VR, such as helping people suffering from PTSD and/or depression. There are also drawbacks, which due to how new the technology is, haven’t been adequatly studied and explored. These effects can range from something as simple as motion sickness (VR sickness) to people having disassociate experiences and even losing there sense of presence in reality. Due to the boom in popularity, many studies are now being performed to try and determine the extent of these effects; unfortunately, it remains quite difficult to get an accurate idea of the long term effects because of the age of the technology. While there is no doubt that some of these effects are somewhat dramatized, just like how people thought microwaves give you cancer, there is still a real threat of long term effects that may only be realized when it is too late.

As a gamer and a techie, I will be the first to admit that VR opens doors for technologies that were once the things of movies, and it is incredibly exciting and almost surreal. Although I also feel it should be approached with some degree of caution. An experiment on rats in virtual reality showed that certain parts of the brain, specifically in the hippocampus, would either shut down or behave erratically. The effects of VR on the eyes is also something to take into consideration, a professor at UC Berkley has been studying “vergence-accomodation conflict” which causes discomfort in the eyes when using VR. It is caused by the eyes needing to remain focused at the same distance (where the screen is), while the distance you’re eyes needs to converge or diverge at is changing (this is how the 3D effect of VR is generally achieved) which causes stress within the eyes. 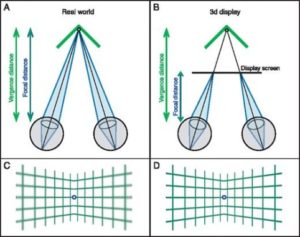 Overall, I am just as excited as everybody else about the endless possibilities of VR. I just want people to approach it with an air of caution, as it is still a new and relatively un-researched technology that could have some unforeseen effects.