It’s been a few months since my last post about the Windows 10 announcement, and Microsoft released build 10041 (FBL_impressive) last week, so it’s about time to take another look.

In some general news, Microsoft announced that windows 10 will be a free upgrade for current Windows 7 and Windows 8 users for the first year.  This is pretty good news, except that there is no word about what happens after that first year.  Since Microsoft is giving so many things for free now, some people are speculating that Microsoft will charge yearly for updates, which is a major departure from their current “buy it once” scheme.  As someone who absolutely loathes subscription charges, this would be a massive deal breaker, so I hope that it’s nothing more than speculation.

Here are a couple pictures of my experience with the latest build.

The start menu has a very nice sliding animation and I think it does a good job of mixing elements of the traditional Windows 7-style menu and Windows 8 live tiles.  If you’ve grown partial to the full screen start screen, pressing the arrow in the top right corner causes the start menu to use the whole screen. 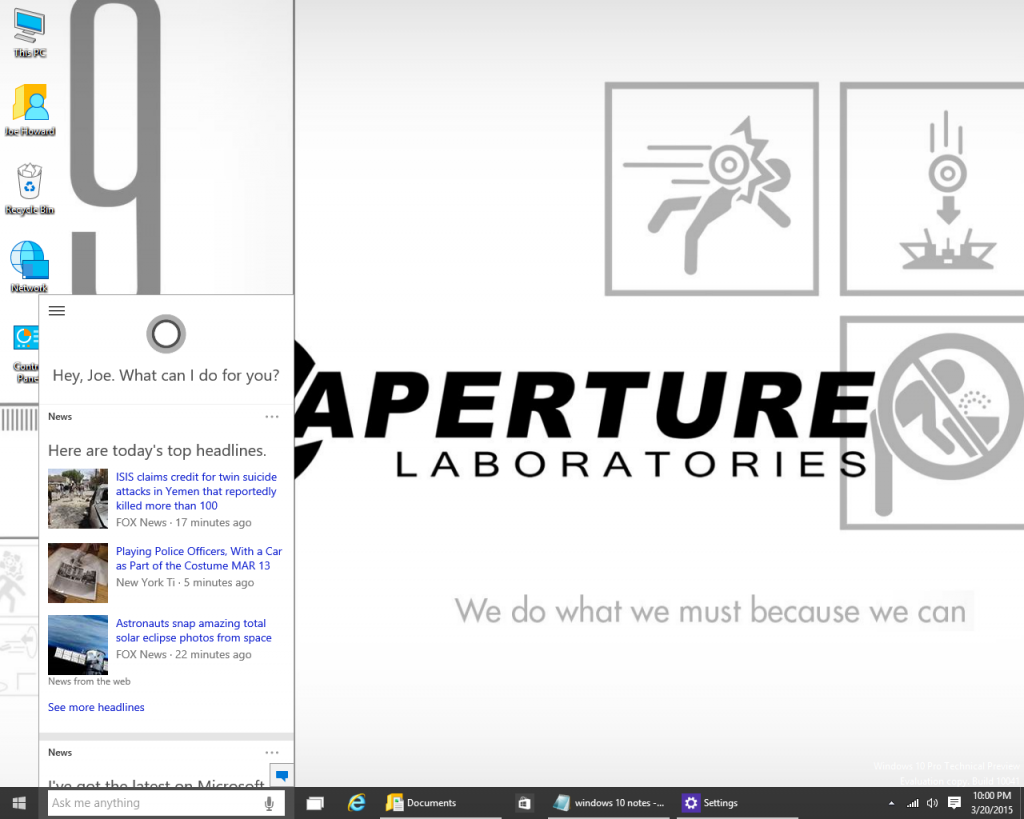 The first thing I noticed was the giant search bar next to the start button.  Meet Cortana, the Microsoft equivalent of Siri.  Click the little mic button, and ask her a question. She can open programs, perform searches (only with Bing, though), and banter around.  I asked “What’s up?”, to which she responded “4 out of 5 five-year-olds agree, the sky!”  When asked “should I wear a raincoat tomorrow”, Cortana responded “It’s hard to say for sure Joe, Here’s the forecast” and displayed the following:

It’s still pretty early and there’s a lot of work to do.  Asking to “open paint” opens up a bing search of literally “open paint” and asking “What’s the weather going to be like tomorrow” just crashes the program.  But it’s a pretty promising feature, and I’m looking forward to what it will become.

Microsoft has refined their virtual desktops, adding a the key command “ctrl + win + arrow” to switch between desktops.  “win+tab” brings up the screen below showing all the windows open on the current desktop.  Dragging the window to a different desktop on the bottom moves the window to the other desktop.  The biggest problem is there is no key command to move a window to a new desktop without the win+tab screen.  This feature has developed quite nicely since the first build, so I’m pretty optimistic about what it will become.

Beyond the obvious, Microsoft has made some other visual changes.  There are a number of pretty classy new animations for opening windows and switching between maximized and minimized modes.  Open windows no longer have borders which is a strange departure from previous versions, but it does not affect being able to resize the windows.  Finally, the window titles are justified to the left like the old days instead of being centered like Windows 8.

Microsoft has announced a new browser called “Spartan” to replace Internet Explorer.  Beyond the announcement, not much is known about the new browser, and it doesn’t show up in the current build.

There’s also a notification panel now, so the little message bubbles show up here now instead.  Also, while the Control Panel still exists, Microsoft defaults to the “Settings” app, which, unlike the Windows 8 version, is actually pretty useful.

Pressing “win + (left/right) arrow” still snaps windows to the side, and now gives a list of options to put in the empty space.  Once a window is snapped to the side, pressing “win+ (down/up) arrow” snaps the window to the corner.  Window snapping is a little smarter than before, so if a window isn’t exactly half the screen area, snapping another window to the other side fills any remaining space

Windows 8 style Modern apps launch in a window, but pressing an arrow in the title bar makes it fill the screen.  My biggest gripe here though is that the program does not stay full screen when switching between desktops.  This severely detracts from the usefulness, in my opinion.

Windows 10 is shaping up quite nicely as the open beta continues on.  Periodically the OS asks for feedback about certain elements ranging from “is the transition between desktops smooth?” or “how helpful is the settings app”.  So far, Microsoft has been really good at listening to the feedback and making changes accordingly.  I am looking forward to see how the OS changes as we approach the late summer / early fall release date.

This thanksgiving, I am thankful for Open Source.  For those who are not familiarity with the term, open source allows developers to publish the source code for their programs to the public, allowing anyone to download, edit, and share the program.  It’s great because it allows people from around the world to collaborate and work on making a particular program.  Each person adds to the program in their own time according to their strengths, building on each others work.  The result is a program distributed to people all over the world developed by people who thoroughly enjoy writing software for people.  But best of all is the resulting culture of openness and information sharing.

END_OF_DOCUMENT_TOKEN_TO_BE_REPLACED

If you follow the fun-filled world of computing, you’ve probably heard that Microsoft announced the next version of Windows on September 30th. During their event, Microsoft showed off a few of their biggest features, and released a public beta.  If you’re a Windows fanboy like me, you can download in install it through Microsoft from here.