The Technological Marvel that is Statcast

Next time you go to a baseball game look towards the press boxes; you may just spot a black box that looks inconspicuous. That black box is the reason Disney paid 1.1 Billion for a third of MLB Advanced Media. That black box collects data for a program called Statcast. 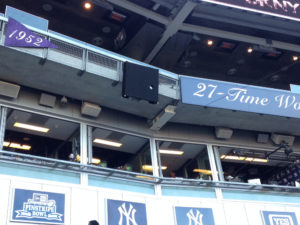 For those of you that aren’t aware of Statcast, you can think of it as a way to track everything that goes on in the baseball stadium. For those of you who are paranoid that you are always being watched, don’t worry: MLB didn’t spend millions of dollars to see how far and how fast you spill your drink. The Statcast tracking system is a combination of two other systems, one a system developed by Trackman that is based on the Doppler radar (flight paths of baseballs are infinitely easier to track than storms) and a few cameras that help with the three-dimensional aspect of the game. Statcast provides a better fan experience by helping the common view to see the subtleties that allow each player to make a catch, hit a home run, or fool a batter. This isn’t just for the viewer though, it is also for the player and other personnel actively part of the game. The players can use this data to determine where to play, to either side or further back or forward, 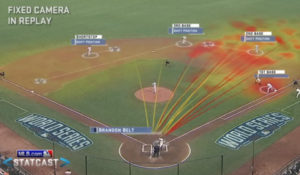 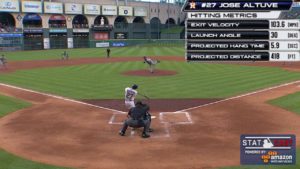 For those front office executives that build teams it helps them determine which pitcher throws pitches with a higher spin rate (the spin of the ball that goes from a pitcher’s hand to the glove of the catcher in a matter of milliseconds), which regardless of the prior results should trend to more strikeouts. 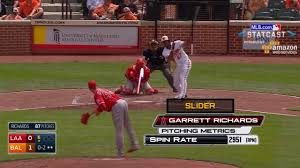 Even though this was introduced in 2013 teams are still figuring out how to take full advantage of the new data. At a sabermetric seminar (a gathering of some of the brightest minds in baseball) some teams’ executives were actively trying to find the best uses of the hitting portion of the Statcast.

Today April 13, 2017, Elon Musk sent out a tweet stating that his Tesla company plans on releasing their plans for a Semi-Truck line in September. Tesla is the same company that produces electric automated cars. The fact that Tesla is making semi-trucks in itself not important news, it is more about the repercussions that come because of it.  When I first saw the tweet it made me think of the semi-trucks from the Logan film that was recently in theaters. They were automated without anyone driving, basically this would be what Elon Musk and company are striving to achieve, that took movie took place in 2029 and it could be a reality by then as well. The problem that not just the U.S but the rest of the World will face is another industry that is taken over by machines and a loss of millions of jobs. According to Alltrucking.com the U.S has 3.5 Million Truckers, and actually are looking for more. This touches on a larger issue in our society today, more industries are becoming mechanized. With more industries no longer using the same number of humans to create labor, this creates a labor crisis, it’s why Donald Trump was elected he promised to bring jobs to America, but didn’t realize the real problem is not jobs leaving for other countries but our increasing technological advancements. This isn’t just a Trump issue but a problem has been with every leader in the world. How do we create jobs via the government or to get other businesses create jobs and industries that can’t be taken over by computer systems?

If it is not possible for us to make the jobs required, then we must come up with subsidies and an allowance for those people that cannot acquire a job. The Trucking industry maybe the next industry to go, but it won’t be the last and might not even have the most impact. The Oil industry is also an industry that won’t last and it supplies 8.5 million jobs and it will depend on what the governments of the world replace it with if the economy will be able to handle the massive hit.