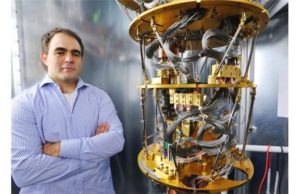 “If you think you understand quantum physics, you don’t understand quantum physics”. Richard Feynman quoted that statment in relation to the fact that we simply do not yet fully understand the mechanics of the quantum world. NASA, Google, and DWave are trying to figure this out as well by revolutionizing our understanding of physics and computing with the first commercial quantum computer that runs 100 million times faster than traditional computers.

Quantum Computers: How they work

To understand how quantum computers work you must first recognize how traditional computers work. For several decades, a computer processor’s base component is the transistor. A transistor either allows or blocks the flow of electrons (aka electricity) with a gate. This transistor can then be one of two possible values: on or off, flowing or not flowing. The value of a transistor is binary, and is used to represent digital information by representing them in binary digits, or bits for short. Bits are very basic, but paired together can produce exponentially more and more possible values as they are added. Therefore, more transistors means faster data processing. To fit more transistors on a silicon chip we must keep shrinking the size of them. Transistors nowadays have gotten so small they are only the size of 14nm. This is 8x less than the size of an HIV virus and 500x smaller than a red blood cell.

As transistors are getting to the size of only a few atoms, electrons may just transfer through a blocked gate in a concept called quantum tunneling. This is because in the quantum realm physics works differently than what we are used to understanding, and computers start making less and less sense at this point. We are starting to see a physical barrier to the efficiency technological processes, but scientists are now using these unusual quantum properties to their advantage to develop quantum computers.

With computers using bits as their smallest unit of information, quantum computers use qubits. Like bits, qubits can represent the values of 0 or 1. This 0 and 1 is determined by a photon and its spin in a magnetic field where polarization represents the value; what separates them from bits is that they can also be in any proportion of both states at once in a property called superpositioning. You can test the value of a photon by passing it through a filter, and it will collapse to be either vertically or horizontally polarized (0 or 1). Unobserved, the qubit is in superposition with probabilities for either state – but the instant you measure it it collapses to one of the definite states, being a game-changer for computing. 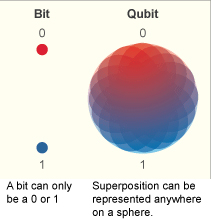 Qubits can also feel another property we can entanglement; a close connection that has qubits react to a change in the other’s state instantaneously regardless of the distance between them both. This means when you measure one value of a qubit, you can deduce the value of another without even having to look at it!

When performing logic on traditional computers it is pretty simple. Computers perform logic on something we call logic gates using a simple set of inputs and producing a single output (based on AND, OR, XOR, and NAND). For example, two bits being 0 (false) and 1 (true) passed through an AND gate is 0 since both bits aren’t true. 0 and 1 being passed through an OR gate will be 1 since either of the two needs to have the value of true for the outcome to remain true. Quantum gates perform this on a much more complex level. They manipulate an input of superpositions (qubits each with probabilities of 0 or 1), rotates these probabilities and produces another superposition as an output; measuring the outcome, collapsing the superpositions into an actual sequence of 0s and 1s for one final definite answer. What this means is that you can get the entire lot of calculations possible with a setup all done at the same time! 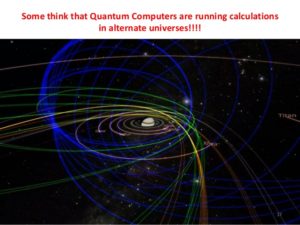 When measuring the result of qubit’s superpositions, they will probably give you the one you want. However you need to be sure that this outcome is correct so you may need to double check and try again. Exploiting the properties of superposition and entanglement can be exponentially more efficient than ever possible on a traditional computer.

What Quantum Computers mean for our future

Quantum computers will most likely not replace our home computers, but they are much more superior. In applications such as data searching in corporate databases, computers may need to search every entry in a table. Quantum computers can do this task in a square root of that time; and for tables with billions of entries this can save a tremendous amount of time and resources. The most famous use of quantum computers is IT security. Tasks such as online banking and browsing your email is kept secure by encryption, where a public key is made for everyone to encode messages only you can decode. Problem is public keys can be used to calculate one’s secret private key, but doing the math on a normal computer would literally take years of trial and error. Quantum computers can do this in a breeze with an exponential decrease in calculation time! Simulations in the quantum world are intense on resources, regular computers lack on resources for bigger structures such as molecules. So why not simulate quantum physics with actual quantum physics? Quantum simulations for instance could lead to insights on proteins that can revolutionize medicine as we know it. 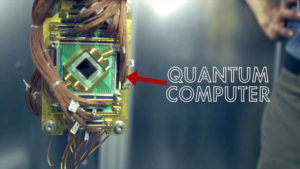 We’re unsure if quantum computers will only be a specialized tool, or a big revolution for humanity. We do not know the limits for technology but there is only one way to find out. One of the first commercial quantum computers developed by DWave will be stored in Google and NASA’s research center in California. They operate the chip at an incredible temperature at 200 times colder than interstellar space. They are currently focused on using it to solve optimization problems, finding the best outcome given a set of data. For example: finding the best flight path to visit a set of places you’d like to see. Google and NASA are also using artificial intelligence on this computer to further our understanding of the natural world. Since it operates on quantum level mechanics beyond our knowledge, we can ask it questions that we may never otherwise be able to figure out. Questions such as “are we alone?” and “where did we come from?” can be explored. We have evolved into creatures that are able to ask the nature of physical reality, and being able to solve the unknown is even more awesome as a species. We have the power to do it and we must do it, because that is what it means to be human.