After the purchase of my iPhone 7 and the tragic loss of my ability to use my Audiotechnicas’s m50xs, I decided that it was time to go wireless. The use of the 3.5 mm headphone jack to lightning was not something that I wanted to use; it would be too easy to lose and just looks silly. I wanted to get good all around earbuds that I could use while studying, biking and walking around campus, working out at the Rec and going on runs. Some of the potential candidates were the Beats Powerbeats3 Wireless,  JLab’s Audio Epic2, Bose SoundSport Wireless and Apple Airpods.

Powerbeats3 currently going for $149.99 on Amazon and $199.99 from Apple. The Powerbeats have a cable that connects the two  I also didn’t want to get such a lengthy cable, but they’re very good for exercise and have a long battery life of 12 hours. They also have a remote and microphone support to take calls. 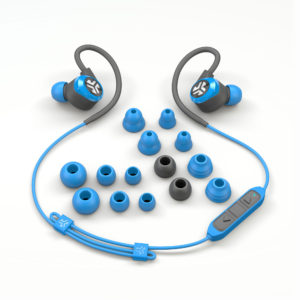 JLab’s Audio Epic2 had a more modest price tag at $99.99. They have a cable that connects the two wrap-around inear earbuds and also boast a 12 hour battery life. I’ve enjoyed using the Epic2’s over the last several weeks since my purchase. The wireless earbuds come with seven different size and form factor plastic in-ear pieces so they fit comfortably and the wires wrap around the ear for a light and well secured fit.

My one complaint with the ear pieces is that they insulate from outside noise almost too well so they have to be pushed out whenever you want to have a conversation with anyone or purchase a coffee on your commute to classes.

The JLab Audio Epic2s also perform admirably as wireless fitness earbuds. They’re loud and rarely need to be turned up to the max even in a noisy gym setting. They also feel light and well secured and don’t shift with movement which makes them an ideal running or exercise choice for music on the go. They’re also protected against damage from sweat or splashes so you don’t have to worry about short circuiting them; which was a concern by some of the reviews I read on Amazon.

All in all I would say that these are a solid purchase for wireless earbuds. They come at a low price in comparison to their competition, and although they don’t look as flashy as Powerbeats, they perform just as well with the same battery life. I would strongly recommend these to anyone who is looking to go wireless or made the decision of purchasing an iPhone 7.