We all know the frustration of trying to insert a USB plug into our computers or phones, flipping it over and trying again, only to find we were actually right the first time. The problem is that both sides of a USB plug look the same has plagued us all. Apple had fixed this problem with their proprietary Lightning connector which was omnidirectional (i.e. it could be inserted on either side). But this connector could only be found on Apple devices. The cell phone industry in particular was in need of a new solution.

Think back to the first cell phone you had. For many, this was in the early 2000’s (or even earlier), and think about what kind of charger you used. Most phones came with a charger that plugged into the wall, and they were largely incompatible with other phone brands. As cell phones became more popular, manufacturers decided to settle on one standard plug type that could be used by any phone. Enter the Micro USB Type B: 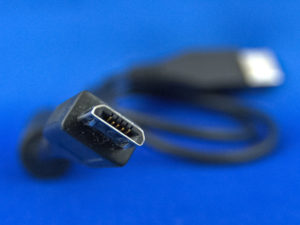 This plug should look familiar if you have an Android phone, but it has also become almost ubiquitous as the connector for most portable devices including cameras, tablets, and smart watches. A notable exception to this standard is Apple who has used proprietary connectors since the introduction of the iPhone.

However, since 2007 when the micro-USB was introduced, the needs of the industry have changed. Data speeds have gone faster, devices require more power, and the need to connect more types of devices calls for a new type of universal plug for all. This is the motivation behind the development of the USB-C connector.

The USB-C is omnidirectional like Apple’s Lightning connector so there won’t be any more trouble with which way the plug is facing. They support the USB 3.1 data standard, which can transfer up to 10 Gigabits per second (Gbps). Possibly most interesting, USB-C is capable of carrying 100 Watts of power, meaning that in addition to becoming the primary data connector type, it could also replace most power cords in the near future.

Also of note is Apple’s adoption of the USB-C connector. They have redesigned their newest version of the Thunderbolt connector to be USB-C compliant, meaning that one can use a USB-C cable, but get Thunderbolt 3 speeds of 40 Gbps. It is worth emphasizing that although the connector on Apple’s Thunderbolt 3 is the same as USB-C, the data transfer specification and therefore transfer speed is not the same. However, Apple’s adoption of the new plug type in conjunction with the rest of the industry means that USB-C is is a truly universal connector.

With its higher data speeds, power support, and ease of use, USB-C is getting ready to be the port trend all ports. Indeed, the USB Implementers’ Forum (the organization responsible for USB specifications) has declared that they intend USB-C to be “future-proof”. As technology demands increase over the next few years, we will see if this new connector can live up to its promises.