Form the beginning, people all around the world have shared a deep love of music.  From early communication through drumming, to exceedingly complex arrangements for big bands, music has been an essential part of human communication.  So it makes sense that people would push to find a way to record music as performed by the musician.

The advent of Tin-Pan Alley in New York initially produced only sheet music – the recording of music on paper, readable only by trained musicians – but it was the invention of Thomas Edison’s phonograph which altered the history of music the most. With the phonograph, sound could be recorded from the air.  Early phonograph systems employed a light diaphragm, often in the shape of a horn, suspended on springs and attached to a needle which would carve into a rotating cylinder of wax.   These records were made without any electric power and have a distinct sound which often wavers in tone character and pitch.

In the 1920s, the RCA company developed the first electrical audio recording system which employed microphones and a magnetic medium on which to record electrical impulses.  The microphone could vibrate more easily than the phonograph horn and could therefore reproduce sound in a more natural and consistent manner.

After a brief push to standardize the format for recorded music, Edison’s wax cylinder gave way to the disk-shaped Gramophone record, which eventually gave way to the two formats we are now familiar with: the 33 rpm vinyl record, for full-length albums, and the 45 rpm vinyl record, for single songs.  Now obsolete, these formats allowed for exceedingly accurate reproduction of recorded sound for half a century.

In the mid-twentieth century, Claude Shannon determined that information could be encoded into discrete values, transmitted, and decoded to reconstruct the original information.  The human voice could be transmitted, not as an analog electrical representation of a sound-wave, but as a series of numbers representing the magnitude and polarity of the sound-wave at given times (samples).  This method of encoding information into discrete values allowed for the more efficient use of limited resources for transmitting and storing information.

For music, this meant that sound could be broken down into only the magnitude and polarity of the sound-wave, at a given time, and represented as a binary number.  With music now a series of 1s and 0s, and with far less information encoded into these 1s and 0s than with the analog formats, music could be stored on small, plastic disks called Compact Disks.  These compact disks, or CDs, contained an unadulterated digital representation of the original analog sound-wave.  The CD, though sometimes thin and clinical-sounding, offered some of the most detailed reproduction of sound in history. 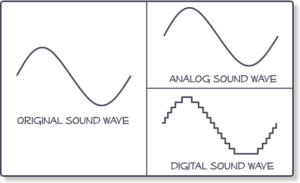 Digital Streaming and the Push for Compression

In the 1990s, online music sharing services birthed a new format for recorded music: the mp3.  The mp3, though a digital representation of an analog sound-wave like a CD, made feasible downloading music over the internet.  It did so using a simple principle: use a fourier transform to view the sound-wave as a series of sine waves of different frequencies and remove all the frequencies with low magnitudes.

While this technique allowed for digital audio files to be much smaller, it had the nasty effect of sometimes removing some important sonic character.  Though insignificant sounds in a piece of music could be a small amount of background hiss, it could also be the timbre of a musical instrument.  For this reason, mp3 files would often lack the fullness and detail of the CD or analog formats.

Though internet speeds have vastly improved since the early days of music streaming, compression has not gone away.  The unfortunate nature of the problem is that one powerful computer can run a compression algorithm on a digital audio file in less than a second and then stream it to a user; streaming lossless digital audio, like the digital audio from a CD, requires the rebuilding of physical infrastructure to handle the extra data.  From a profit-generating stance, compression is cheap and effective; most people don’t notice if audio is compressed, especially if they are listening to music on computer speakers or poorly constructed headphones.

However, there are some out there who do notice.  Though services like iTunes and Spotify do not offer the purchasing of music in non-compressed formats, music in these formats can sometimes be purchased from lesser known services.  CDs are also still in production and can be purchased for most new albums through services like Amazon.  Some may also be surprised to learn of the prevalence of the analog formats as well; for most new releases, a new copy can be purchased on a vinyl record.  Since most music is recorded directly to a digital format, vinyl records are made from digital masters.  However, these masters are often of the highest quality as there is no need to conserve space on the analog formats; digital audio sampled at 44.1 kHz and 96 kHz both consume the same amount of space on the surface of a vinyl record. 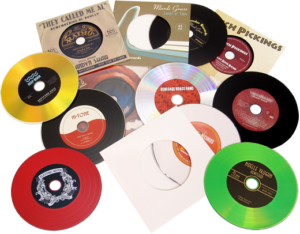 So what is the answer for those looking to move beyond the realm of compressed music?  Well, we could all write in to Spotify and iTunes and let them know that we will only purchase digital audio sampled at 96 kHz with a 24-bit word-length…but there may be a simpler way.  CDs and vinyl records are still made and they sound great!  If you have an older computer you may be able to listen to a CD without having to purchase any extra equipment.  For faithful reproduction of the CD’s contents, I would recommend a media player like VLC.  Additionally, if you have grandparents with an attic, you may even have the necessary equipment to play back a vinyl record.  If not, the market for the analog formats seems to be getting miraculously larger as time goes on so there is more and more variety every day for phono equipment.  There’s also always live music and no sound reproduction medium, no matter how accurate, can truly capture the spirit of an energetic performance.

So however you decide to listen to your music, be educated and do not settle for convenience over quality when you do not have to!