The world of Virtual Reality has had a dramatic increase in popularity in recent years. The technology that people have been waiting for has finally arrived and it comes in the form of a head-mounted display (HMD). There are many brands of HMD which range in their ability to achieve total immersion. The low-end forms of VR use a smartphone and a pair of lenses, like Google’s Cardboard:

The cheapest versions of VR use the same same lens-enclosure method of delivering VR. Users are limited to apps they can find on their phone’s app stores, which are buggy at best. Still, if you’re unsure whether or not you want to buy a more immersive HMD, this is a great way to get an idea of what you’ll be buying. The real immersion begins when the display and the technology inside is specifically designed for VR gaming.

The best VR experience while still keeping your wallet happy is from Samsung Gear VR, but it requires that you already own a recent Samsung Galaxy smartphone:

AT $60, the Samsung Gear VR has some more intricate technology than the Google Cardboard allowing for a better experience. You could also add the Gear 360, which allows for “walk around the room” immersion for $350 but if you find that price point reasonable you may be better off in the high-end territory. The Gear VR has its own app store with games designed for use with it.

If you don’t have a Galaxy Smartphone, but you do have a PlayStation, you may be interested in what 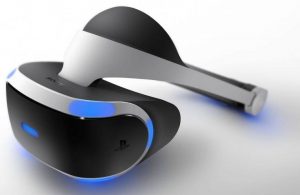 Sony has been working on. Their VR HMD is the Playstation VR. At $400, the PSVR connects to your PlayStation for use with VR-enabled games. The PSVR is meant to be used with the Playstation Move Controllers which will add another $100 to your total. A Sony executive says plans to make PSVR compatible with PC may be in their future.

The high-end forms of VR include the Oculus Rift and HTC Vive:

These HMDs are designed with PC games in mind. They provide an experience far superior to the cheap options but will run at a high price of $599 for the Rift and $799 for the Vive. The Vive includes two hand controllers which allow the user to have virtual hands for interacting with VR objects. Oculus is working on a similar device, the Oculus Touch, which is available for pre-order as of October 2016.

Many companies are investing in virtual reality and creating their own devices to compete with the front-runners. It is expected that the VR market will expand much further, especially once the price point of the high-end HMDs comes down. Virtual Reality is in a state of great potential; the applications of these headsets goes well beyond gaming. The military is interesting in them for training purposes. Educators can use them to teach students. Doctors can use them to treat psychological conditions. I have no doubt that Virtual Reality will eventually become part of our everyday lives.