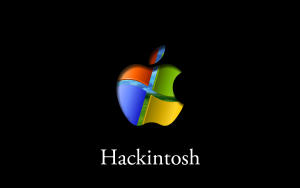 From birth, we are told there are two* kinds of computers in this world: Macs and PCs.  If you want a elegant, user-friendly, perfectly running out-of-the-box machine, get a Mac.  If you want unparalleled compatibility with third-party applications and an unmatched selection of bargain-priced computers, get a PC.  But what if there was something in-between?  As of Mac OS X Leopard, you can use the in-build Bootcamp Assistant to install Windows an a Mac machine.

That’s all fun and good, but what if you want to do the opposite; that is, install Mac OS X on a PC?  Doing this would allow one to opt-out of spending the extra cash for one of Apple’s artfully crafted, aluminum-clad, designer machines.  Those of you out there who would be perfectly happy with a cheap, plastic machine to throw around, but would like an operating system with a little bit more elegance than Windows, the Hackintosh may be for you.  For those who are interested in a custom-built computer and would like to have an operating system which is a bit more orientated toward graphic design and video-editing, installing Mac OS on a PC may also be suited to your needs.

So what is the deal with installing Mac OS X on a PC?  To answer that question, I actually did it.  I will be doing a little experiment to test ease of installation and use, as well as overall stability.  I will give a brief synopsis on each step of the set-up process as well as any points of interest.

*For the purpose of this article we ignore Linux.  Though it boasts intimidating compatibility with a wide range of different machines, we are looking at operating systems that are not open source and are typically preloaded on the machine from purchase.

If your computer has an Intel processor (and you didn’t buy it for $30 on bestcomputerfreenow.net), then it should be compatible with Mac OS X!  WooHoo!  However, installing Mac OS and running it smoothly are two different things and we will touch upon that later in this article.

By far, the best way to install Mac OS on a PC is to build your own PC.  There are some computer components you can use in your Hackintosh to make things run a bit smoother.  Doing a Google search for ‘hackintosh’ will being you to a whole host of websites devoted to listing compatible parts.  There are some brands, like Intel, which tend to work better than others with Mac OS and sticking to them is a good way to ensure smooth operating and easy installation.

Installing Mac OS has become a great deal easier over the years with the advent of user-friendly softwares which create all sorts of goodies for you like installer USBs and software optimizers.  For my own hackintosh experiment I used a program called ‘Unibeast’ to make an installer USB.  Those of you who have had to make a USB for installing windows after downloading the operating system from a service like Dreamspark, this process is very similar.  Apple does have official instructions for how to make a USB installer without any fancy software, but their process requires proficiency in the command terminal (the app with the black rectangular logo in the utilities folder).  Apple’s instruction can be found here for those of you who want a bit of a challenge.  For those of you, like me, who want to play it safe and use someone else’s app to do it for you, the following installation guide can help with that.  The installation guide will cover the usage of the Unibeast application I mentioned earlier.

As for plugging in your USB stick and installing, you’ll need to change a few settings on your computer’s hardware.  This can be done in the bios.  Don’t know what a bios is? The bios is like a mini operating system that lives under Windows or Linux (or whatever operating system you choose, Solaris maybe); the bios is sometimes just text and sometimes has some nice graphics to help you out.  When in the bios, you can change the settings on your machine that have to do with how the parts of your computer are physically working.  Luckily for the hackintosh, there are not very many things you have to change.  The aforementioned installation guide goes over all the specific things that need to be changed.  If you are installing Mac OS on a PC laptop or desktop that came with Windows already on it, chances are you won’t have to change very much, if anything at all.

Once the actual Mac installer opens up on your computer and you get prompted to select a language and time zone, you are probably in the clear.  In my own humble experience, if things are going to not work, they will often not work immediately.  My first few times trying to start up the installer – bear in mind I was installing Mac OS onto a home-built computer which had to be specially configured – I didn’t even get to the language selection screen.

The actual installation process, once it gets rolling, should be pretty simple and should leave you at your shiny, new Mac desktop.  However, be warned that there is one more thing you have to do before things will work.  Mac is very picky about which computer parts it likes to work with and will need some finessing.  Luckily, the same developer as Unibeast has made a pretty app that will finesse for you; it is called ‘Multibeast’ and should be able to get your hackintosh up and running.  Just fire the program up and select all the different parts on your computer.  If you select nothing else, make sure you click on the right button to get your internet working.  My best suggestion for this process would be to, in advance of installing, find out what is in your computer in the first place.  Opening the Windows start menu and going to ‘system’ should give you a brief overview of what’s under to hood, but it is often the case that Google can be of assistance if your machine has a manufacturer.

Once you’ve hit the button on Multibeast that says ‘build’ and restart your computer, you should be good to go.  Naturally though, things may not go as planned.

Hackintoshs are often plagued with things not working.  On my own hackintosh experiment, I was not able to get sound to come out of the computer’s headphone jack for a period of time after installing the operating system.  For this problem, I simply Googled it and thew everything I could find at my computer until it started working.

That is the unfortunate nature of the hackintosh.  As Apple does not support anything they do not make; things do go wrong and it is not always clear how to fix them.  My best advise would be to simply be patient and work at it.  A hackintosh can be a wonderful machine but it can also be quite an undertaking.  The best way to get one up and running is to know when to take a break.

When you’re done with your break, Google and Reddit’s hackintosh subreddit are excellent resources and will often have exactly what you need.

Well, after my own hackintosh experiment experienced its last apparent issue, it has been quite an experience.  As a long time user of Apple computers (and a long time user of outdated Apple computers), it is a breath of fresh air to be in such a comfortable and familiar operating system and have it be so blazing fast.  Apple does make some fantastic machines, but unless you are a graphic designer, architect or some other professional who has to use one for work, you are probably experiencing a slightly older MacBook.  Sometimes it is a good thing to have to wait for things (like iTunes to open) but it is also nice to not have to wait at all.  With configuring done correctly, the hackintosh can become a fast and proficient machine.

Want proof?  I could run some benchmarking software, like Cinemench, but I’d rather just say that I have written this entire article on the very experiment which I had so prided in this article.  Paired with a nice IPS monitor (see Julian’s excellent article on monitors for more on that) and a slightly pre-used Apple keyboard, the hackintosh is more-than-comfortable working environment.  I suppose with tasks like word processing, there wouldn’t be so much of a difference between the hacked machine and MacBook; though I could be rendering a feature-length film on Final Cut Pro in the background and not notice.

Though the hackintosh is fast, affordable, and an excellent project, it is might not be for everyone.  I will admit my bias toward the hackintosh as an IT guy; some of the troubleshooting skills I take for granted which really help with making a hackintosh may not come to all users right away.  Sometimes things don’t work; computers are increasingly complicated machines and can experience all sorts of problems.  Purchasing a machine with OS X or Windows pre-installed can alleviate many of the issues which come with installing the operating system yourself.

Ultimately, it’s about user preference.  If you’re willing to put in some hard hours to get an excellently fast and customizable machine up and running, then the hackintosh may be the beast you’re looking for.  However, if you just want everything to work (which is completely fine), then I think Apple has you covered; and might I add that you are in very good hands.