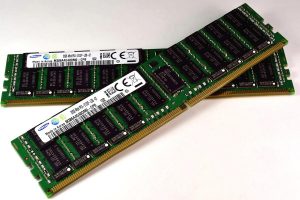 DDR4 memory has been on the market for some time now and looks to be a permanent successor to DDR3L and older DDR3 memory.  However, other than being one more DDR than DDR3, what is the difference between the old and the new?  There are a few key differences, some good and some bad.  This article will give a broad overview of the costs and benefits of DDR4 memory. 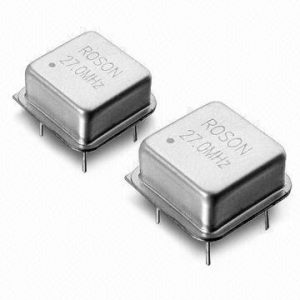 Every component in your computer has to have a clock, otherwise the seemingly endless sequences of ones and zeros would become all jumbled up and basic logic functions would become impossible.  Memory, though it does not perform any logical work on the data which lives in its vast arrays of binary-junction transistors, does still use a clock to govern the rate at which the aforementioned data is overwritten or refreshed.  With faster clock speeds, DDR4 can be written to, and read from, far faster than DDR3 or DDR3L.  This gives a big advantage to those out there using blazing fast computer processors which are held back by the speed at which they can read and write to memory.  However, users looking to purchase a laptop with DDR4 memory may not experience any noticeable speed increase from DDR3.

With new versions of computer components, often times manufacturers are able to boast about improved power efficiency.  With DDR4 this is the case!  Older DDR3 memory sticks would require about 1.5 volts to run; the new DDR4 memory sticks can run off about 1.2 volts.  This may not seem like a whole lot, but the amount of power needed to store data in memory is very very minuscule so a large amount of excess power is turned into heat.  Anyone who has spent a few hours playing video games on a laptop will know just what excess power consumption feels like when it’s going into one’s legs.  A hot computer doesn’t just cause mild discomfort; transistors, as non-ohmic resistors, are impeded in their ability to switch electric current on and off when they get hot.  This means less ability to perform the mathematical functions that are at the base of all computing and, therefore, a slower computer!  Less power consumption means less excess power, a cooler machine, and a faster computing experience. 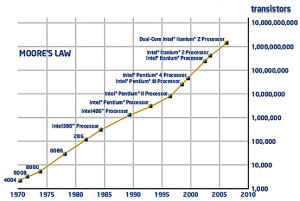 Moore’s Law has two components to it: computing power will double roughly every 18 months, and the cost of existing computer components will be halved in the same amount of time.  Sometimes we reap the benefits of the halved cost; sometimes we don’t.  At the moment, purchasing DDR4 memory for a new computer is a costly endeavor.  DDR4 memory can work more than two times faster than DDR3 but there is a considerable cost premium.  This is to be taken into consideration when choosing whether or not to make the leap into DDR4: is the improved speed and efficiency worth the price.  That question lies well beyond the scope of this humble article.

With modern computers, we enjoy an unprecedented level of flexibility.  Computers now are more modular than ever.  However, just because different components can fit together without being modified, that does not mean they will work together.  With DDR4, you need, with only a few exceptions, brand new, top-of-the-line components to work.  This means, if you are to purchase or construct a computing using the fast, new memory, you need a fast, new CPU and a fast, new motherboard.  For those of you out there who have no interest in building a computer, you will be paying upfront for a laptop or desktop fitted with the latest version of everything.  This will further up the cost of purchasing a machine fitted with DDR4 memory.

So What’s the Deal?

With all new things, there are costs and benefits.  With DDR4, yes, you will experience faster read and write speeds and overall faster computing, but it will come at a cost.  For people who use their computers for browsing the internet and word processing, there will be a very small noticeable difference.  However, for avid users of applications such as Photoshop and Final Cut Pro, DDR4 will yield a substantial speed increase.

Ultimately, it is up the use whether or they want to take the leap into the new realm of faster read and write speeds.  Yes, you will get to have a blazing-fast computer that you can brag to your friends about, but it will come at a cost.  You will also run the risk of spending more money and not really getting all that much more speed if you are using mostly memory non-intensive programs.  However, if you are like this humble IT guy, and spend much time video and photo editing and want a computer that is not going to start hissing when you open Photoshop, then DDR4 is the memory for you!