A couple of weeks ago I decided that it was time to advance to the modern era, and migrate from the trusty old flip phone I’d been using for years to a modern smartphone. Thus, the all-important question came up: what phone should I get? Nowadays there is a vast array of smartphone options for me to choose from. I could get an iPhone, a phone that seemingly everyone around me had. I could get an Android phone, whether it was a Sony Xperia, a Google Nexus, a Samsung Galaxy, or any one of the other infinite amount of Android devices. Most people could pick from one of those two categories, an iPhone or an Android phone, and be completely satisfied.

I looked a bit further.

Outside of the walls of the smartphone realm owned mostly by Apple and Google, there was the Windows Phone. Most people don’t give think to give it a second thought. After Windows 8’s introduction of the fairly negatively-received Metro interface on desktop computers, who would want to deal with the same experience on a smartphone? As it turns out, people are missing out.

I wanted to get a smartphone with a mix of good hardware and a fantastic camera. iPhones fit most of that bill; they have great hardware and have good cameras. Certain Android smartphones, notably the Sony Xperia Z3, also have great hardware and good cameras. But none of them had the truly fantastic camera I was looking for. A friend of mine owned a Nokia Lumia 1020, a Windows Phone released in mid-2013, and I was able to see first hand the gorgeous pictures it was able to produce with its 41 megapixel camera. Unfortunately, by December of 2014, while the camera was one of the best on the market for a smartphone, the internal hardware was becoming outdated. The solution to this conundrum? The Lumia 930, released in the first half of 2014. Not only did it come with great internal hardware, like two gigabytes of RAM and a Snapdragon 800 processor, but it also came with a wonderful 20 megapixel camera. The pictures from the camera were even comparable in quality with the 1020, which was amazing. Hence, my mind was set, and I bought a 930.

The phone arrived a couple of days later, and after installing my SIM card, it was good to go. As the phone started up for the first time, I had a few nervous feelings about how the interface would be. Windows Phone was using the same tile interface that Windows 8 tried to use, and since the tiles didn’t fare too well on desktops, I was unsure of how it would be on mobile.

I didn’t have anything to worry about.

The tile interface works very fluidly, and the tiles themselves provide a refreshing change to the phone environment from the traditional interfaces of iPhones and many Android phones. The tiles are also able to display information on the start screen, rather than solely acting as shortcut icons to apps; known as ‘live tiles’, certain apps can make use of this feature to make weather or news information visible at a glance. My various news apps can show the latest headlines, my weather app can show the weather, my YouTube app can show the latest videos from my subscriptions, etc. As unfitting as the Metro tile interface appears on the desktop Windows computers, it works so well on Windows Phone. It all feels very natural on a phone, and how fast the operating system is by default just makes for an extremely smooth experience. 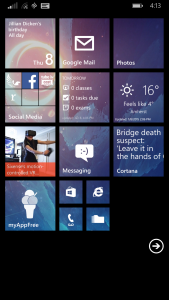 The start screen on my Windows Phone. Yes, you can customize the background image behind the tiles.

Praises aside however, the phone does face problems in the app department. Having to face competition from the much larger giants of Apple and Android has led to Windows Phone having a much smaller userbase, and thus a smaller incentive for developers to develop apps. If you’re not a big app user like me though, many of the popular apps on Android and Apple already have versions for Windows Phone that work extremely well.

All in all, Windows Phone is a refreshing change from the giants of Android and Apple that have dominated the smartphone market for so long. The tile interface is fresh, works fluidly, and looks beautiful. The cameras on Windows Phones are second to none in the smartphone market. Although it faces some problems with regards to apps, the database of apps is ever-growing and there are high quality versions for many popular Android and iPhone apps. I gave Windows Phone a shot and have grown to love it, maybe you should try it out too?