Lately the adjective smart has been used to describe a lot of items that we interact with on a day to day basis such as phones, TVs, buildings, and now cars. When I say smart cars I don’t mean the super-compact cars manufactured by Mercedes, I’m talking about cars like the Tesla Model-S that implement computers and other technology to improve and enhance their functionality.

The Model-S is an exciting car in many ways. It is fully electric, able to travel between 208 miles and 285 miles (depending on the size of the installed battery) on a single charge. The Model-S is also equipped with features like smart suspension, autopilot safety features, on-board 3G and wi-fi networking capabilities, and a luxury interior. The on-board networking capabilities are what set the Model-S apart as a smart car. While the internet connectivity can be used for streaming music straight to your car or checking up on your social networks while on the road (from the passenger seat of course), Tesla has been using the functionality to push important updates to the cars, as well as receive diagnostic information from the cars themselves. Among the updates that have been pushed to the cars so far, the two most exciting updates are the smart suspension and autopilot features.

Smart suspension allows the operator to adjust the vehicle’s suspension to suit their needs and saves the settings so that they will automatically be used at that location again. For instance, let’s say that a Model-S owner has a large speed bump near their home. To avoid damage to the underside of the car the driver can tell the suspension to raise the car high enough to get over the bumb without scraping. The suspension system would then remember this setting, and would automatically raise to the set height every time the driver nears that location.

Another feature that Tesla has been working on with each update is the autopilot safety system. The Model-S comes equipped with a front facing camera, and 360° ultrasonic sensors. With each firmware update that Tesla pushes they have been adding additional functionality to the system, with the eventual goal that it will become an actual autopilot system, but this is still a ways off.

Tesla is not the only company 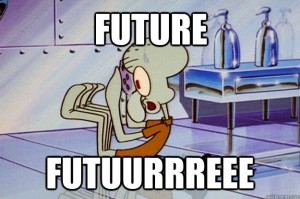 researching smart car technology, they were just the first to release a successful model. Other companies hoping to roll out smart cars soon include Chrysler, Chevrolet, and Cadillac. The future of smart cars holds some exciting possibilities, (like heads up displays projected onto the windshield) and personally I can’t wait.