Modern smartphones are becoming more and more like portable computers, which has advantages and disadvantages. The advantage is obvious; having the functionality of a computer at your fingertips. The disadvantage is less obvious; there are some security compromises involved.

There are a few main types of mobile malware, and some are more threatening than others.

One common type is SMS fraud. It is more common among Android users than iOS users, however it does not necessarily mean that one platform is better or safer than the other. The reason for this is likely that Android has the only app store that allows app creators to publish their apps without verification (which is a necessary step when trying to publish to the App Store in iOS).

SMS fraud occurs when a user receives a text message from an unknown number (usually around 5 digits) asking the user to subscribe to some service such as daily quotes, jokes, fun facts, ect. ect. These messages are “premium messages”, meaning that they will cost the user money by directly charging their cell phone bill.

Sometimes, the agreement to pay the monthly charge is not obvious enough that the user will notice it, and therefore they will end up with charges to their bill that are unfamiliar.

Another type of mobile malware exists within apps that are fraudulent, and have not yet been flagged. These apps act as though they are legitimate (e.g. posing as a popular game or utility), but they eventually trick users into subscribing to premium text messages. 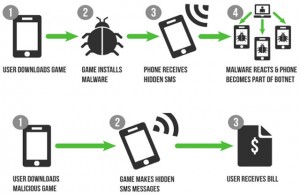 As mentioned before, this occurrence is more common on Android because the Android app store does not require apps to be verified before being published to the store, meaning anyone can publish any app they create.

If your iOS device is jail-broken, however, this may decrease your level of security, and a mobile anti-malware app may be of use to you.

What can I do about it?

There are a number of antivirus apps available to both iOS and Android platforms. These can be purchased through the Google Play Store or the iOS App Store. Some feature the use of a VPN (Virtual Private Network), which allows users to surf the web in a secure way on any Wifi network. Others feature a scanner that looks for suspicious files (e.g. attachments in emails). Some apps will even scan other apps for processes that appear malicious or fraudulent.

–MalwareBytes offers an anti-malware scanner on the GooglePlay store, and on the Amazon Kindle store here.

-For iOS, there are a few options available, however they often require a subscription, which often isn’t worth the money for most users because the iOS platform is less vulnerable when used correctly (when not jail-broken, essentially).

If you aren’t interested in a mobile security application, the best way to stay protected is to simply know the risks, and be mindful of what you download. For example, if you get a text message from an unknown number asking you to respond via text or call, ignore it and delete it.You can also try blocking certain senders if you are getting messages from certain ones in particular.

When browsing through apps in any app store, be sure to check out the user reviews and the number of downloads. This can usually give a good idea of whether or not the app is legitimate.

Keep in mind that IT User Services does not officially support or endorse the above mobile security applications.