If you are about to buy a new laptop you might be confused about the different options out right now. To simplify the problem there are basically three types of laptops: PC’s, MacBooks, and Chromebooks. 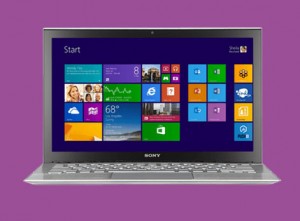 common. They have been around for the longest time and have the most support. A new PC will most likely have the Windows operating system though some are beginning to have a Linux operating systems installed. There are a lot of companies that make PCs. Some notable brands are ASUS, Dell, and Toshiba. Because there are a lot of different manufactures there is a lot of variability in the quality of a system. There is a wide range of prices for PCs from about $200 to +$4000, obviously ranging with the quality of the system. The average student would be looking for something within the $500 to $700 price range. Systems running Windows are most common because there is a lot of software written for the Windows operating system. A lot of Math and Science departments advice their students to get Windows machines because a lot of the software they use only runs on Windows. The disadvantage to PCs is they often are not very durable. Also if the system is running Windows, it will not be as secure. The Windows operating system is known to have security leaks and because it is very popular most viruses are written for Windows.

In addition to PCs there are also Macs. Mac computers are only made by Apple. Because of this, there is a set standard across all Macs. The laptop line of Mac computers are called MacBooks. MacBooks are generally very fast, solid, and durable. There are many stories where people have spilled a drink on their MacBook and it still ran fine. This type of luck is much more rare with PC’s. However, these benefits don’t come without a large price tag. The price range for MacBooks is $900-$2000. While these are expensive they retain their value for a very long time because of their durability. In addition to the hardware, the operating system they run (Mac OS) is known to be good. Mac OS is very secure and rarely gets viruses. It is also free to download. So where with a Windows machine, if you wanted to upgrade to Windows 8 from Windows 7 you would have to pay $120 with a MacBook if you wanted to upgrade Snow Leopard to Mavericks it would be free of charge. While there are many benefits of a MacBook the price tag deters many people from purchasing them. Because of this they are less popular which results in less software being made for them. This leads to another point about buying a Macbook.

While there is less software made for Mac OS, there is still a lot of software some of which is exclusively available on Mac OS. For a list of some of the software that is available follow this link. A lot of programs that are required for the Art and Music departments, like GarageBand, is only available on Mac OS. This is why the Art and Music departments often recommend that their student get MacBooks. Another type of laptop is the ChromeBook.

The ChromeBook is a very new type of laptop. It runs on Chrome OS. This is a new type of operating system that a lot of people don’t know much about. If you want an overview check out this video. Google has multiple videos that describe the ins and outs of Chome OS. It is basically an operating system built around a browser. It is based around the idea that most everything people do on a computer is online. Because Chrome OS is really just the browser Google Chrome it is very very fast. Starting the computer takes a matter of seconds not minutes. And if you are someone who usually only uses their browser, you will boot directly into your browser so there is no waiting around for it to load. Now you may be asking yourself about the all the other programs that you need, but Google has already thought of that. The Google AppStore has a lot of apps that you can download to fit your needs. They include office programs like Google Docs and entertainment programs like Google Play Music. For most simple programs there is an alternative in the Google AppStore however, for big programs like Adobe Photoshop there will not be an adequate alternative. Chrome OS also does not provide a way to download and install any programs. So if certain programs that don’t have a good alternative in the AppStore are required for a lot of your classes the ChromeBook may not be for you.

Because Chrome OS is very simple, powerful hardware is not necessary. Most ChromeBooks have 2-4 GB of memory, an Intel Celeron processor, and a 16 GB solid state hard drive. This less powerful hardware means two things; cool and cheap. The solid state hard drive means the computer will not heat up because nothing is actually moving, and it also means that the computer is very fast. Possibly the most appealing aspect of a ChromeBook is its price. Most ChromeBooks come in at a price of $200-$400.

Each of these laptops have their own benefits and drawbacks. Your job is to figure out which one has the most benefits for your particular situation. Important things to keep in mind while making this decision is price, necessary programs, and your major. Take your time and perform the necessary research. The last thing you want is to buy a laptop that you don’t even like much less can’t even use.