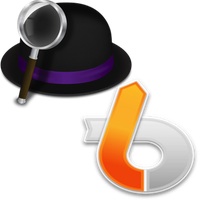 Application launchers are very much a niche area. For many people, being able to place a frequently used application on the dock is enough – simply click on the application and it’s ready for you to use. For others, especially those who like to keep their hands on the keyboard, taking the time to locate an app with the mouse can start to seem like a hassle. In fact, research has shown that keyboard shortcuts can be just as effective as using the Menu Bar, and can be done within complex applications with very little error at a much faster rate. Macintosh OSX has a built in application launcher called “Spotlight”, which allows you to search your computer for applications and files simply by calling spotlight and typing in the name of the file or application you wish to use. This is great for people who want to quickly launch an application, or search the computer for a file, but Spotlight’s functionality ends there. If you find that Spotlight is insufficient for your needs, or you’re interested in increasing your productivity when it comes to computer related tasks, then an application launcher might be for you.

In the past, an application by the name of QuickSilver has reigned supreme in the application launcher market. This is no longer the case, and in this article we’ll talk about two launchers that offer the most functionality for today’s users: Alfred 2 and LaunchBar.

Before we begin, a quick side note:

While application launchers are very powerful, there is also a bit of a learning curve you must go through before you’re able to access the full functionality of the application. This kind of thing isn’t for everyone, but if you have the patience and the interest in learning how to work one of these apps, you’ll be rewarded with an increase in both the speed at which you can work, and the amount of work that you can get done.

Now, on to the fun stuff!

Which application launcher is good for you? Well, it depends. Both of the utilities (Alfred 2 and LaunchBar) have a great set of features to help you get the most out of your time.

One of the coolest things that an application launcher can do that spotlight can’t is search the web. Both utilities have built in engines that allow you to search the internet without even having to open your web browser. While this may seem like a minor thing, being able to quickly look for the answer to a question without leaving the window you’re working on is really slick and can help you stay focused on the task at hand. Both of the utilities also have the ability to quickly launch your favorite music simply by opening the window and typing in the name of the track. LaunchBar is a tad bit faster at doing this than Alfred (since it doesn’t have to fully launch your music player before playing the file), but both allow you to play songs from not only iTunes, but Spotify and Pandora as well. You can also search Spotify within the launcher without leaving your current window. You can use these programs as Clipboard Managers, which can help you with moving everything from snippets of text to pictures, or even your graduate thesis. Launchers can also be used to trigger AppleScripts or Automator workflows, which, when used productively, can make a world of difference – we won’t go into this specific feature in this article, but check back in the future for more information on the topic.

Both Alfred and LaunchBar have similar features, but they also have their own caveats that make them stand out from one another. First of all, the basic Alfred package is free, which makes it very much more appealing than LaunchBar, which only comes in one version, and costs 35 dollars for a license (although they offer a fully functional 30 day trial, and the license comes with an eBook that teaches you how to use it). The basic version of Alfred is a great way to check and see how much you’ll really use a launcher, and a great way to “practice” using one before you drop the cash on either LaunchBar or the full version of Alfred, which is about 29 dollars.

The basic version of Alfred contains all of the functionality of Spotlight, plus a little bit extra. Alfred Basic contains the functionality to perform a quick web search (by typing the first few letters of the website’s name, followed by your search query).

Or quickly access an application by typing part of its name. 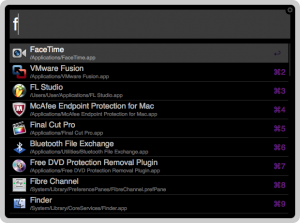 The functionality of the Alfred Basic ends here, but the basic version should give you a bit of an idea if an App Launcher is something you’d use.

The full version of Alfred contains enough extra content to justify its asking price. The biggest selling point of the so called “Power Pack” is the ability to manipulate your files though Finder using only your keyboard. This can be done with a multitude of shortcuts, all of which are customizable by the user. You can also set up ‘workflows’, which are reminiscent of OSX’s own Automator, and which allow you to customize specific series of tasks to speed up your productivity. For example, you could set up a workflow that automatically organizes the file you’ve just saved based upon how you’ve named it, or you could set up a workflow that automatically sends an email to a group of people once you’ve made some changes to your website. The great thing about this is that Alfred Workflows are very user customizable, while also being much more accessible than Automator, which can scare people away with it’s complexity. You can find out more about the power pack on the Alfred website here.

Offering many of the same features as Alfred, LaunchBar is an equally competent launcher with a couple of its own features to set it apart from the competition. First and foremost, LaunchBar has the option of running in the system foreground (like any other desktop application, such as Messages, Mail, or Safari), which allows you to quickly access it by either clicking on the Dock icon, or using the CMD+TAB shortcut to select the application. You can also drag items onto the dock icon to copy them to LaunchBar’s amazing clipboard manager, which we’ll cover more about in a second. If you’d rather have the launcher act more like Spotlight, you can choose to disable the dock icon, and have LaunchBar run in the background.

Another cool feature exclusive to LaunchBar is the ability to use the ‘instant send’ feature to quickly and efficiently move and send the files on your computer. It works like this; if you have a file selected in the LaunchBar window, you can double tap the instant send key (which is CMD by default) and instantly move that file, whether it be to somewhere else on your computer or to someone on the internet, either by email, iMessage, or by uploading it to a website. You can also send it to a specific program – for example, you could have a .jpeg file selected and send it over to Photoshop with a couple of keystrokes.

LaunchBar also doubles as a clipboard manager, which means it takes everything that you’ve copied (either via right click + copy or CMD+C) and stores them all in one place, allowing you to not only access the latest file in your clipboard, but also any file you’ve worked on recently. This can be really useful if you’re working with a lot of data, such as writing a research paper or working on a big art project.

LaunchBar costs $35, but has a free 30 day trial available if you’re just looking to give it a try.

Apple has realized the power of the application launcher, and has just released that it will be including within Spotlight some of the more powerful launcher features in its newest release of OSX, which is debuting sometime next fall. 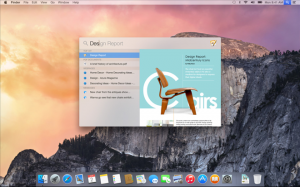 Whether you’re a power user, or just someone looking to save a little time when you’re writing your next paper, an application launcher may be something worth looking into. The learning process can be a little slow, but the boost in productivity is most definitely worth the investment.