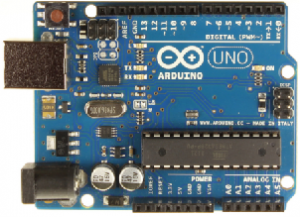 Interested in circuits and programming? The Arduino is a good place to start. The Arduino (on the left) is basically a pre-augmented microcontroller that is programmed in high-level Arduino code that is similar to C++/C. The brain behind the arduino is the microcontroller (the black, rectangular chip), which is a device that, when programmed, allows one to automate processes electronically, e.g., it can be used to interpret and respond to data read in from some external sensors, or to turn motors at a certain speed for some amount of time. 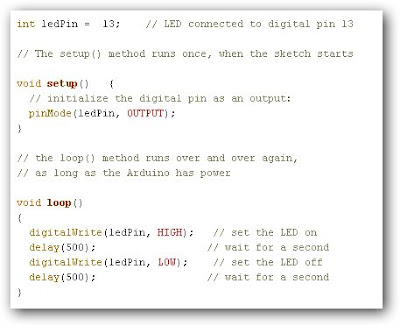 Normally, without this Arduino package, a microcontroller has to be “augmented” before it can be used, which means it needs some additional circuitry to get working (mainly, a voltage regulator, an external clock, and some capacitors). The microcontroller also has to be programmed in order to perform tasks to one’s specifications. It’s challenging and time-consuming to study the datasheet and program the chip, which is typically how it’s done. However, the Arduino provides an IDE (integrated development environment), which allows the programmer to program the chip with a high-level Arduino language (shown above), which is much easier for new programmers to understand.

The best place to get started with the Arduino is on their website: http://arduino.cc/en/Guide/HomePage

Some other great Arduino links: