Purchasing a new laptop is a scary process. When you first walk into a big retailer, the sheer volume of technical information can feel overwhelming. Figuring out how to get the most for your money from this? Nearly impossible.

This article will serve as a beginner’s guide to give you enough hardware knowledge to make an informed decision.

While a physical retail store can be a good place to test out the physical feel of a laptop and get a general idea of what you might like, it is a bad place to shop. When viewing a laptop in a store, you only get as much information as they can fit on a postcard. When you’re online, you can get a ton of easily accessible information right under the “specifications” tab on most websites. Retail sites like Amazon.com and Bestbuy.com are very well organized and offer access to tons of owner reviews to see how other buyers are liking their new laptop.

If you have a favorite brand you can go straight to their website at places like dell.com or apple.com to take a look at what the have to offer. Once you have found a laptop you think would be good for you (using the rest of this guide), be sure to shop around. There are tons of websites like newegg.com and tigerdirect.com that often have great sales going.

Of course, if you are UMASS faculty, staff, or student, you have access to our U$ave program. Go to usave.umassp.edu and check out the deals offered there on select Lenovo, Dell, and Apple computers. If one of those fits your needs, you almost certainly won’t be able to find a better deal anywhere else. Most of these deals are only available though the U$ave website, the campus store offers discounts on Macs but not Lenovo or Dell. 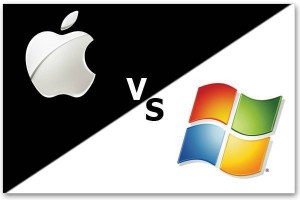 There are too many differences (and misconceptions about those differences) between the two to really cover here, so I’ll try and stick to what I can cover quickly.

Macs can get viruses. There aren’t as many out there, but they are still just as vulnerable as PCs. Fortunately, UMASS students, staff, and faculty get McAfee antivirus for free, which comes in both Mac and Windows versions.

With PCs, the more money you pay, the more reliable your computer will be. With Macs this statement doesn’t really work, as Macs start at the high price bracket. The most commonly replaced parts in a computer are made by the same third party manufacturers for both Mac and PC. (1) However, the way Macs are built means that far more repairs result in a complete replacement of the computer. Basically, only one component may be broken but an entire section of the computer will have to be replaced, resulting in a far more expensive repair.

The hardware in both is much the same. The most important parts of the computer (hard drive, processor, and RAM) are essentially identical. You could find the exact same high end processor in a PC as in a Mac. “Both platforms now can come equipped with Intel® Core™ processors that result in impressive performance.” (2)

There is no real advantage to either side, Mac or PC, because of the variety in power and size between all available models. Many Macs do have smart batteries, which help to prevent overcharging your battery and increase its lifespan – a feature few PCs have. If you want a Mac, but your major requires you to run Windows, running Windows on a Mac will decrease battery life.

For simplicity, it’s hard to beat a Mac. For users that have trouble dealing with general use of Windows, a Mac will be easier and experience problems less often. This simplicity does come at a small cost; if a Mac experiences a problem, it is often far more difficult to fix.

Contrary to popular belief, Macs do not have much of an advantage here. For professional editors, Macs have good high end software but nowhere near the variety of options that PCs have. For the hobbyist, low end Mac software is usually much better and the retina display can make editing a more enjoyable experience.

Macs are easier to use and experience problems slightly less frequently. The hardware is nearly identical between Macs and PCs so neither has an advantage in speed or power. PCs definitely offer a lot more options for what to buy. From touchscreen laptops to powerful gaming computers you will find something that closely fits your needs. If you have the extra money, a Mac is not a bad buy. If you want more power, or aren’t willing to pay the steep premium for Mac looks and quality, go with a PC.

When comparing CPUs (Central Processing Units), “faster is better” used to be all you needed to know. Each processor is listed at a X.X GHz speed, which is how fast the processor goes through any task it is assigned. Nowadays, however, this is not the only indicator of CPU strength, or even the most important.

Most CPUs are composed of either two or four processing “cores” that each operate at the listed X.X Ghz speed, and work together to complete the tasks assigned to the CPU. The more cores a processor has, the more things it can do at once, and so it will feel quicker most of the time. When the choice is between a faster dual core and a slower quad core, the quad will usually be the better option.

Some Intel processors may be listed as having two cores, but also have HT. If it has this feature, each of those two cores can handle two things at once, turning it into a functional quad core for most day to day computing. This saves power while giving speed for most basic computing.

Many processors offer a feature called Turbo Boost. It ramps up the speed of processors only when needed. You will usually spot it by seeing an “up to” in front of the listed speed. This feature is great at reducing power consumption with only a slight delay in bringing up the speed.

drive. Although your hard drive holds all of your programs and even your operating system, it is too slow for the CPU to use effectively. So, when you first open a program it loads onto the RAM which is much faster and lets the CPU work to its full potential. The only drawback to RAM is that there can not be much of it inside a computer (usually only 4gb in a normal laptop). With programs being loaded onto this small space as needed, sometimes you run out of space and computer performance suffers. The obvious way to fix this is to add more RAM, but how much RAM you need depends on your personal usage.

The basic levels of RAM usage are…

Normal – Browsing internet, word processing, minimal larger program use (media editing is most common), and not many programs open at once. 4GB is more than enough.

Moderate – Some gaming and having many open tabs or programs will require maybe 6GB.

Intense – Lots of gaming and heavy media editing will require about 8GB of RAM. Exceeding 8GB of RAM will only be necessary for very select high end applications, which should probably be run on a desktop anyways.

Much like the CPU, RAM is set to a certain speed. However RAM speed can be largely ignored. Laptops will normally ship with the best RAM for their processor, and even then speed only matters with the APUs mentioned earlier (faster RAM in AMD APU systems generally means better graphics. Get 1333 or 1600Mhz if you can).

If you think you will need 6 or 8gb of RAM but don’t want the other expensive hardware that comes with a standard 6gb or 8gb laptop, upgrading your RAM is an option. Using the compatibility tool at http://www.crucial.com/systemscanner/ will tell you which RAM your computer uses, and you can then your user manual will have a guide to making the upgrade.

The hard drive is what stores all of a computer’s data. Be it music, movies, programs, or
your operating system it is all held on the hard drive. The most common hard drives consist of spinning disks that data is stored on, which you can hear when starting up your laptop. The connectors and sizes for laptop hard drives are standardized (2.5″ for the size with a SATA connector), so upgrading/replacement are usually a breeze.

The most important thing to consider is how much space you will need to hold all of your data. Good rule of thumb is 500GB is okay, 750GB is a lot, 1TB (1000gb) you won’t fill up unless you try.

Just like every other part of a computer, hard drives have a speed at which they operate. Conventional hard drives are measured in the rotations per minute at which the disks spin.  Most drives spin at 5600rpm. This is a fairly slow speed if you are working with a lot of media, and will feel sluggish compared to other options. 7200rpm is the higher performance option for hard drives that lets you load programs faster, transfer files more quickly, and generally have a quicker feeling computer.

SSDs are the blazing fast alternative to conventional hard drives. They consist of solid circuits instead of the spinning disks of normal drives. This makes them better in nearly every way. They can handle more extreme temperatures, more intense impacts (usually rated for a 1500G impact), read/write data far faster, and use less power. The drawback is that this technology is currently very expensive at several times the price per GB of hard drive storage. These prices make them only feasible in smaller capacities, so be aware that while you can get great performance from them, you will sacrifice space.

The solution to the problem of expensive SSDs is to combine them with conventional hard drives. This boosts the performance of the hard drive without having to buy a standalone SSD. This is done with either a “hybrid” drive or a small SSD boosting a larger hard drive. You can spot this by seeing things like “hybrid”, “Intel SRT”(a technology used to coordinate the boost), or “SSD Cache”.

The wireless card is a part that you generally don’t have to worry about. The only thing that should be checked, if possible, is that the card is Wi-Fi certified, dual band, and also a/g compatible. These are the wireless protocols used by the UMASS networks; to get thebest internet speeds, your laptop should be compatible with both. The description looks like “802.11a/b/g/n Dual Band Adapter” or “2.4ghz and 5ghz compatible”.

Touch screens are a great way to use Windows 8 laptops. Windows 8 is designed to be used with a touch screen so get one if you can.

If a laptop has a dedicated graphics card it will be way better at gaming or media editing, but will also use more power. Unless you want really high quality gaming or are using the most intensive editing programs, this is not necessary. These are usually well advertised so they will be easy to find if you want a laptop with one.

These USB ports are way faster than normal ports if you have compatible devices. Getting a 3.0 capable external hard drive would make backups go by much quicker.

With the knowledge in this guide you should now be able to make an educated decision about what laptop is best for you. If you have any more questions, give OIT a call at 413-545-9400.